A West Texas sheriff’s department has been compelled to remove cross decals from patrol cars after an activist atheist organization filed a federal lawsuit. Under the terms of the settlement, Brewster County will be required to pay all parties’ legal fees as well.

According to court documents obtained by Breitbart Texas, the lawsuit, filed by the Freedom from Religion Foundation, notes that Brewster County Sheriff Ronny Dodson placed rear window decals on all patrol cars. The decal is a black cross that displays a thin blue line on the horizontal beam of the cross. It is outlined in white. An additional decal honoring the national motto, In God We Trust, was also visible on some cars. The complaint states that Sheriff Dodson justified his decision because he “wanted God’s protection over his deputies.” The Associated Press reports that he did not place a specific religious preference for employees, only that they “ask for all the help” they could get.

The atheist group named two county residents, Kevin Price and Jesse Castillo, “who regularly come into contact with the Latin crosses” and “suffer irreparable harm” because of them. Price recalled one specific incident of being harmed on January 24, 2016, as he was driving to see Star Wars: The Force Awakens in nearby Fort Stockton. The lawsuit officially commenced on March 2.

The lawsuit originally hoped that an eventual permanent injunction would be entered by the court that would prohibit the displaying of crosses “or other messages endorsing religion” on any Brewster County property. Financial awards to the individual plaintiffs and all legal expenses paid by local taxpayers were also sought.

In an exhibit entered into the court record, the Brewster County Sheriff’s official Facebook page (attached below) published multiple posts demonstrating community support for the decals. A December 20, 2015 post featuring commentary from Debbie Skelton, a mother to a local deputy, commended the program, arguing “I appreciate this bold statement in a time when everyone is so worried about being ‘politically correct’.” A separate post from the department informed that an advisory opinion on the matter was being sought from Texas Attorney General Ken Paxton but directed residents to where they could purchase their own copies of the decals as well.

Plaintiff Kevin Price complained that his criticisms on the department’s Facebook page regarding this matter were censored.

According to the March 22 Brewster County Commissioners Court agenda, an executive session was held to “deliberate and take action as necessary” on the litigation at hand. The AP adds that the body approved a policy banning religious symbols on county vehicles and would subsequently accept a settlement agreement that has yet to be entered into the federal court document management system.

As a condition of the settlement agreed to in June, Brewster County will pay $22,000-worth of the Freedom from Religion Foundation’s legal expenses.

The Madison, Wisconsin-based Freedom from Religion Foundation currently enjoys a 501(c)(3) tax exemption from the Internal Revenue Service and prides itself as “an umbrella for those who are free from religion and are committed to the cherished principle of separation of state and church.” 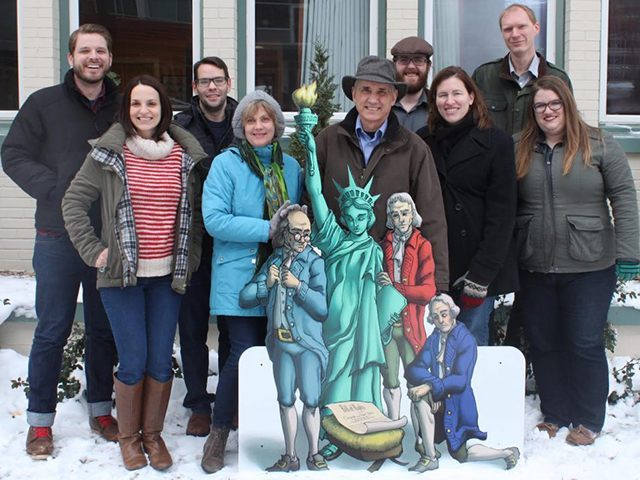 The atheist organization has a separate lawsuit currently pending in Texas after the State removed an image from the Capitol which poked fun at the birth of the Bill of Rights by depicting it in the style of a nativity scene. Breitbart Texas’s Lana Shadwick previously reported on this case when Texas Governor Greg Abbott demanded the removal of the satirical “Nativity Scene” from the State Capitol.

The sheriff’s department’s Facebook page continues to be a place of contention for both sides of the issue in the aftermath of the lawsuit.

Logan Churchwell is a founding member of the Breitbart Texas team. You can follow him on Twitter @LCChurchwell.