A U.S. Army National Guard staff sergeant says he and one of his Army veteran friends were assaulted by Black Lives Matter supporters in San Antonio, Texas, Thursday Evening. “As I was getting my face stomped in and thrown through a window, they (all 4 of them) were yelling racial slurs saying how whites sucked and black lives were better,” Mark Stephen, the second victim, said on Facebook.

Stephen went on to say the San Antonio police were of little help and that they two veterans had to Uber to the hospital. He did not say what his injuries were. 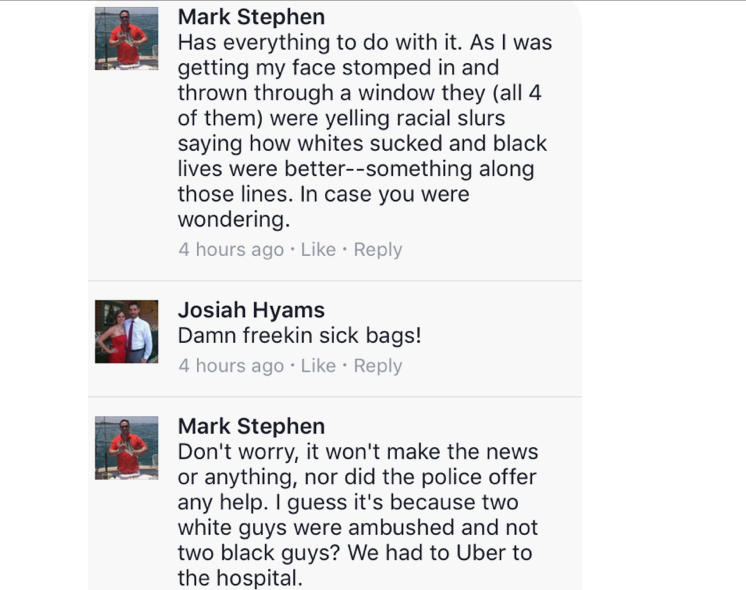 Staff Sergeant Zach Coe Johnson posted on Facebook, “If any of ya’ll believe in the black Lives matter Bulls**t you can visit me and my buddy in the hospital…..we got jumped for being prior military.” 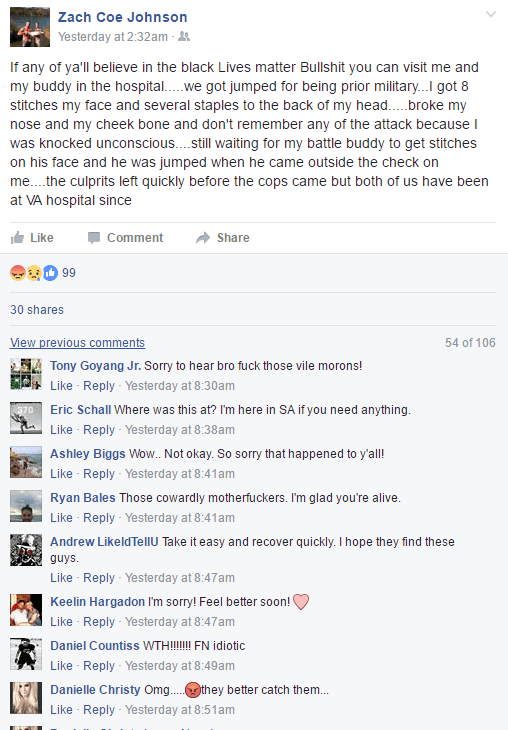 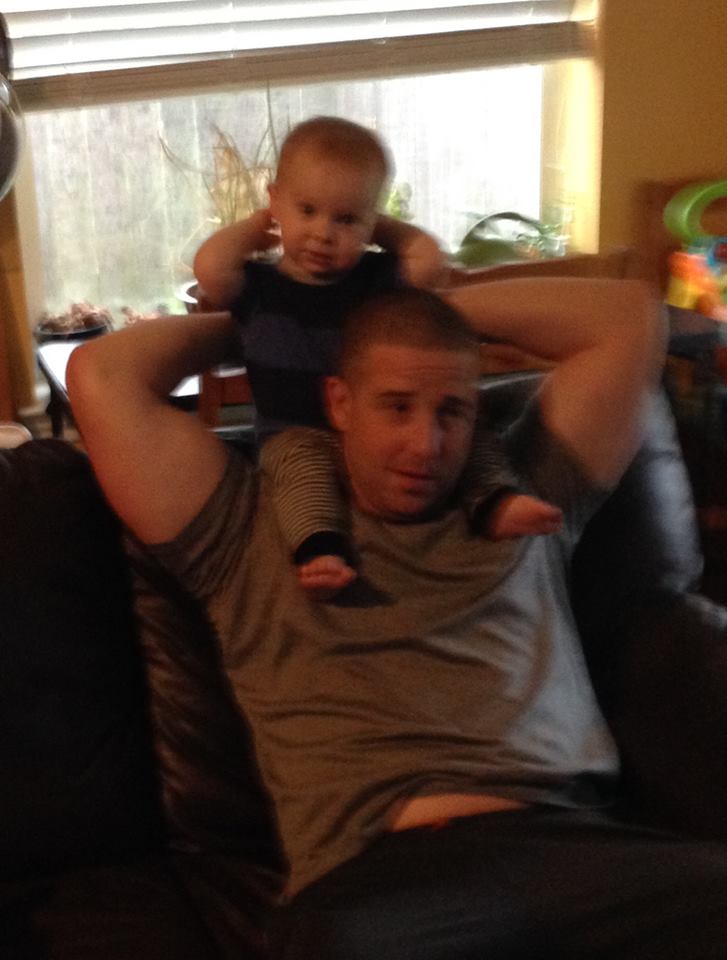 Johnson did not know when he posted on Thursday at 4:54 p.m. that he was “San Antonio bound” from Houston, that he and his friend would be jumped by thugs and would be in the hospital just hours later.

Johnson, who has served this country as a staff sergeant, says he cannot “remember any of the attack because I was knocked unconscious.” He said his “battle buddy,” as he calls him, was assaulted when he came out to check on him.

He is a staff sergeant in the Army National Guard, 1St Batallion, 133rd Field Artillery unit. A friend of his who served with him in the 133rd told Breitbart Texas that Johnson has served on multiple tours, and is “One of the best soldiers I know.” He added, “And he is very nice too.”

Johnson posted, “the culprits left quickly before the cops came but both of us have been at VA hospital since.”

Army Sergeant First Class Lupe Flores posted, “Looks like BLM is going after Soldiers now, in San Antonio no less.” SSG Johnson is one of the finest Soldiers I’ve had the privilege of working with. To my fellow Soldiers at home, stay vigilant and stick with your battle buddies when out and about. I hope you get better soon Zach Coe Johnson and they catch the assh**es that did this.” 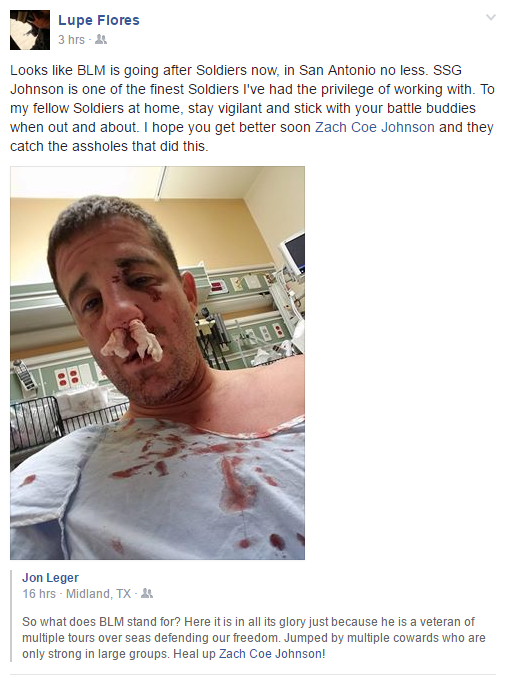 San Antonio is the home of multiple Army and Air Force military installations.

Jon Leger posted, “So what does BLM stand for? Here it is in all its glory just because he is a veteran of multiple tours over seas defending our freedom. Jumped by multiple cowards who are only strong in large groups. Heal up Zach Coe Johnson!”

Eric Crombie posted about his friend’s assault saying Johnson was “ambushed and beaten … because he’s a solider and white. Fortunately his battle buddy was nearby and things weren’t worse, but both are in the hospital today.” He detailed his friend’s injuries and said, “I’m not going to go on a rant about who, why or how this happened but suffice to say we live in a climate in our country right now where we’re targets.” 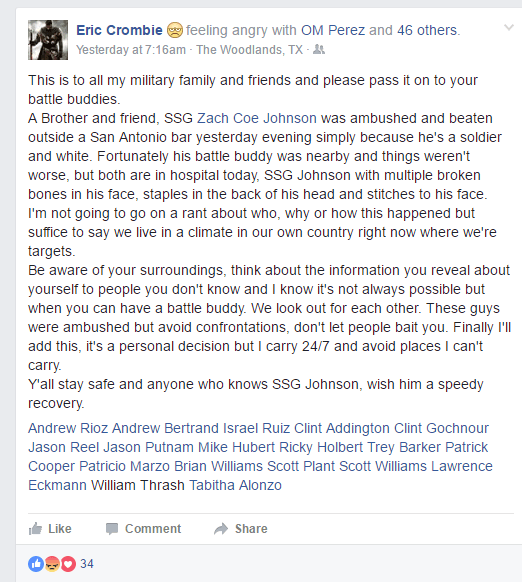 He warned, “Be aware of your surroundings, think about the information you reveal about yourself to people you don’t know and I know it’s not always possible but when you can have a battle buddy. We look out for each other. These guys were ambushed but avoid confrontations, don’t let people bait you. Finally I’ll add this, it’s a personal decision but I carry 24/7 and avoid places I can’t carry.”

Another friend, Jason Reel commented, “[T]he world we live in today we must exist in Condition Yellow. IF you don’t know what this means, look it up. James Cooper’s color code of awareness.” Reel then attached a chart of Cooper’s Color Codes. He added, “Anymore, it’s should be a minimum standard to carry a knife, small flashlight & concealed handgun. Maintain situational awareness at all times & have a battle buddy with you whenever possible. If someone or something makes the hairs on the back of your neck stand up, get the hell out of there. NEVER ignore your intuition. That’s your body’s primal/survival brain picking up on [c]ues your pre-frontal cortex (the part of your brain that is used to reason & think through a process) is attempting to explain away. If you don’t have empty hand skills, get some. I teach select people so if you’re interested, let me know. Above all, situational awareness will keep you out of things you don’t want to be in so stay aware out there & be safe.” 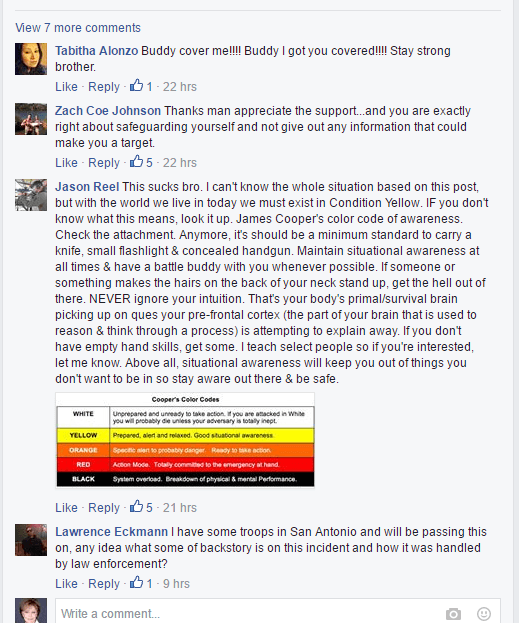 Johnson’s sister-in-law Ellen McNamee Johnson posted, “Love to my brother in law Zach. He and his friend were attacked outside a bar in San Antonio last night by a group of men after they found out the two of them are in the military. Thankfully he survived but is in bad shape with several broken bones and needed staples and sti[t]ches.” She continued, “It hurts my heart that there is so much hate in the world and that every time it seems like progress is being made, more acts of anger and prejudice keep happening.” 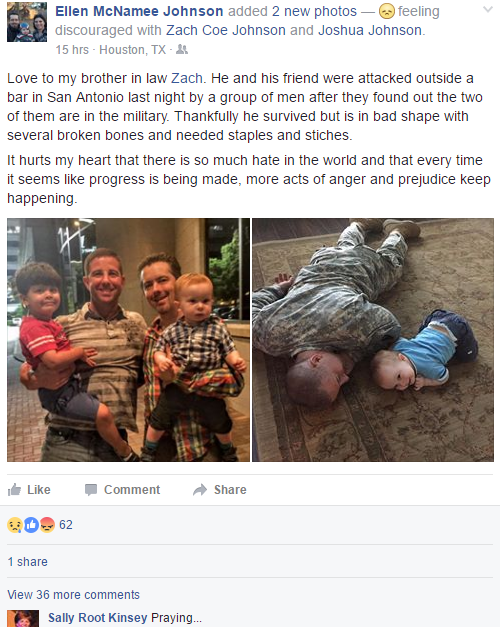 An inquiry to the San Antonio Police Department was not returned as of the time of publication of this article.