In a letter to the Grant Parish Police Jury, the ACLU of New Orleans said “the constitution doesn’t allow such a scene in isolation,” writing that a secular Christmas display must sit beside the nativity scene.

Grant Parish District Attorney Jay Lemoine pushed back against the ACLU’s letter, telling KALB News “It seems these days it is typical for everyone to rush to want to be offended.”

Lemoine said the courthouse already has a secular display, a Christmas tree, inside the building.

“The offense would be if the religious symbols were taken out of Christmas,” Lemoine continued.

The letter was then openly mocked by one anonymous resident who positioned a box with a piece of paper attached that had the words “Secular Display” on it, accompanied by pictures of Santa Claus and a reindeer. 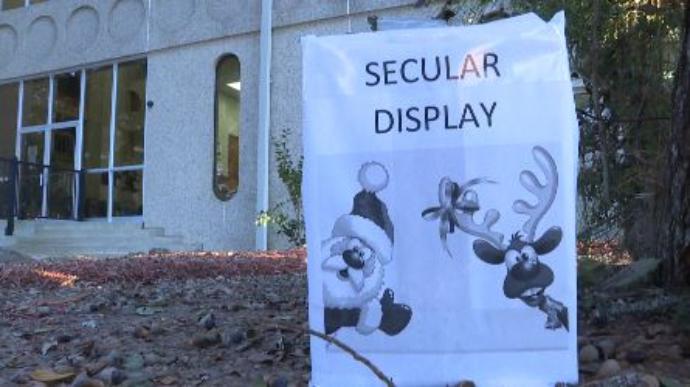 As for the coming years, Lemoine made it clear that Grant Parish would not be bowing the guidelines of political correctness, saying “We are going to maintain this display through Christmas and I’m sure next year we will put up another display.”

Most recently, an Indiana town was pressured to remove a cross from the top of their Christmas tree after the ACLU attacked the public display, as Breitbart News reported.

Protesters in the town retaliated by standing around the town’s Christmas tree holding wooden crosses, slamming the area’s city council for caving to the ACLU.