Three Mexican border states officially joined forces in an attempt to crush the violent drug cartels that have been plaguing their communities. The agreement calls for the sharing of intelligence, sealing up of their state borders, and cooperation during raids

The agreement is the first of its kind where the governors of Tamaulipas, Coahuila, and Nuevo Leon agree to join forces in an attempt to restore peace to border cities that have been ravaged by cartel violence. The agreement is also intended to jumpstart the economy in their areas. 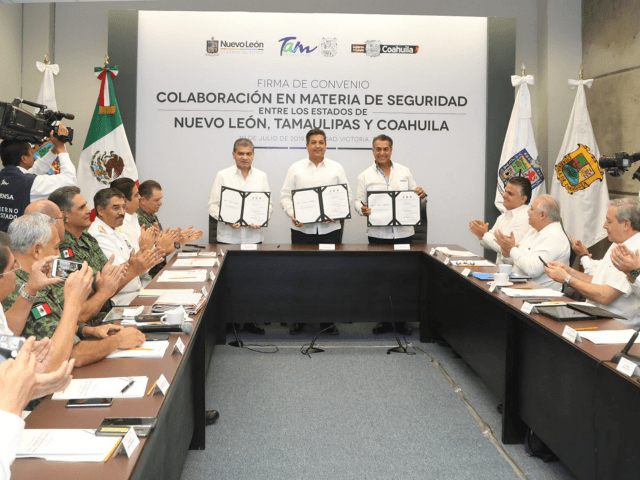 These three states primarily deal with the violence caused by the Cartel Del Noreste faction of Los Zetas, the Gulf Cartel, and the Vieja Escuela or Old School faction of Los Zetas.  In recent months, cartel gunmen managed to jump from state to state after carrying out violent attacks and took advantage of the lack of coordination between state agencies, Breitbart News reported.

“This shows the political will between the three states to join forces, resources, and manpower to ensure that the families in our states get what they have demanded: safety and wellbeing,” Tamaulipas Governor Francisco Cabeza de Vaca said during the signing of the accord.

The new strategy comes at a time when Los Zetas (CDN) has been carrying out numerous attacks on law enforcement in Nuevo Leon, Coahuila, and Tamaulipas as they seek to maintain their operational control of their three main border cities in Nuevo Laredo, Tamaulipas; Piedras Negras, Coahuila; and Ciudad Acuna, Coahuila. As Breitbart News reported, Los Zetas-CDN is currently under the operational control of Hector Raul “El Tory” Luna Luna, the narco-terrorist behind the 2008 grenade attack on the U.S. Consulate in Monterrey, Nuevo Leon. The latest intelligence information obtained by Breitbart News places El Tory in Nuevo Laredo.

The three states see most of the international commerce in and out of Mexico through their multiple international bridges connecting them with Texas.

“This is the area where the bulk of Mexico’s economy crosses,” said Nuevo Leon’s Governor Jamie Rodriguez Calderon. “Here is where Mexico’s riches are generated when speaking about imports and exports.