Cartel-fueled violence in El Paso, Texas’ sister city Juárez continues at an alarming rate with 889 killed during the first seven months of 2019. The northern Mexican state of Chihuahua registered 1,536 homicides total over the same period.

Of the 139 murder victims in the month of July, 21 were females while three were minors. Women are becoming more frequent victims due to increasing involvement in organized crime, say local security officials. Jorge Nava, a prosecutor from the northern district of Chihuahua, agreed with the assessment.

Most of the homicides statewide actually occurred in Juárez. Elsewhere in the border state, Breitbart Texas recently reported on the kidnapping and murders of police.

Juárez registered 1,247 homicides in 2018. The state attorney general’s office attributed the bloodshed to the resurgence of the Juárez Cartel and its turf war with the Sinaloa Cartel’s allies. Local street-level sales of methamphetamine and other drugs are also proven contributing factors. 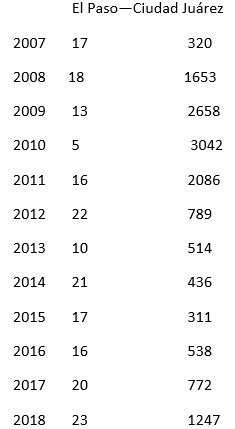 Robert Arce is a retired Phoenix Police detective with extensive experience working Mexican organized crime and street gangs. Arce has worked in the Balkans, Iraq, Haiti, and recently completed a three-year assignment in Monterrey, Mexico, working out of the Consulate for the United States Department of State, International Narcotics and Law Enforcement Program, where he was the Regional Program Manager for Northeast Mexico (Coahuila, Tamaulipas, Nuevo Leon, Durango, San Luis Potosi, Zacatecas.) You can follow him on Twitter. He can be reached at robertrarce@gmail.com.