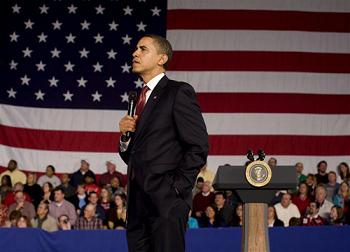 Not to go an analogy too far, but Sarah Palin seems to be taking a page from the Hollywood playbook of George Lucas. She has just completed her own introductory trilogy, and it was an astonishing success.

First, she was a fantastically successful conservative governor lurking beneath the mainstream media’s radar. Next, she was a vice-presidential candidate who, even though she lost, still did more to electrify the base than the headliner. Third, she has now drawn the curtain on her post-election career as a sitting governor, a period that saw her deftly turn the tables on mainstream haters like David Letterman. Like “Star Wars,” she’s not everyone’s cup of tea, but her fans are rabid and chomping at the bit for the next installments. And as to these future installments, the question is whether the next step is going to be “The Phantom Menace” or something that doesn’t suck.

I’m betting on “A New Hope.” Sarah Palin has taken every hit the left and its smug media lackies can dish out – from bogus ethics claims designed to bankrupt her to attacks on her kids. Some of the haters seem to think they drove her from office, and are congratulating themselves that they have somehow driven her off the stage forever. Not quite.

Again, a “Star Wars” analogy: Remember when Darth Vader faced off with Obi-Wan Kenobi? “If you strike me down, I shall become more powerful than you can possibly imagine?” She’s now immune from bogus legal claims and her book will not only raise her profile but set up her family financially for life. Now Sarah is unbound, freed from the need to be up in Juneau and able to network, fundraise and even (maybe) campaign without limitation. And the modern media environment will let her do these things without even a nod to the mainstream media (Do you think Katie Couric will ever get to ask Sarah another question? Ha!)

Lefties, if you were responsible for her doing this, you just unleashed your strongest opponent and made her immune from your strongest attacks all at once. Ouch. It must hurt to know a woman you pride yourself on seeing as a drooling Neanderthal nitwit so thoroughly out-maneuvered you. You do see it, right?

There’s plenty of talk out there about her somehow being a “quitter” for only serving as governor for three years, as if resigning as the Chief Executive of Alaska was like cutting to the head of the women and children’s lifeboat line on the Titanic. Personally, I was unaware of the urgent moral imperative of serving out one’s full term as governor but, if it makes the lefties feel better, when she’s elected president I’m pretty confident she’ll serve a full term. Maybe even two.