YouTube has altered a music video by Katy Perry which showed a character wearing a medallion with an Arabic symbol representing Allah. YouTube erased the medallion from view but left the rest of the video intact.

On February 25th, a British Muslim named Shazad Iqbal from Bradford, UK, launched a petition to have YouTube remove the Katy Perry video. Iqbal said the video was “offensive” to Muslims because one of the characters wearing the symbol for Allah was engulfed in flames.

At the song’s 1:15 mark, Perry, as an Egyptian ruler, turns a middle eastern man to ashes. The man is wearing the Arabic symbol for Allah on a chain over his stomach. The pendant also burns up as the character is dissolved.

Iqbal says that “blasphemy is clearly conveyed in the video” because during her song Perry “engulfs the believer and the word God in flames.”

Only a day after its launch, the petition had already garnered 50,000 signatures, and by February 27th, the petition’s founder noted victory:

Guys I’m thrilled to let you all know the name of Allah has been removed from the ‘Dark Horse’ video we couldn’t have done it without everyone’s support so I thank each and every one of you deeply, our voices have been heard! God bless you all.

The Perry song, Dark Horse, may be viewed on the official YouTube page, but the symbol has been digitally erased from the video (at the 1:15 mark).

Oddly, the original posting date of the video was not changed.

Both Perry and YouTube officials are refusing to comment on the digital alteration. However, YouTube did deflect questions to its community guidelines, which prohibit attacks on religion. The inference is that YouTube erased the image due to the video’s violation of its standards. 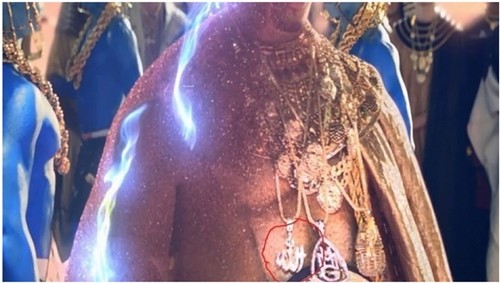