Kim Kardashian has revealed that her husband — the rapper and presidential candidate Kanye West —  has bipolar disorder, asking the public and media to extend “compassion and empathy” to their family during this unusual period.

Her revelation comes after a volatile 24 hour period in which Kanye West fired off a series of bizarre tweets claiming that he was trying to divorce his wife and that his mother-in-law, Kris Jenner, was trying to exert control over him. 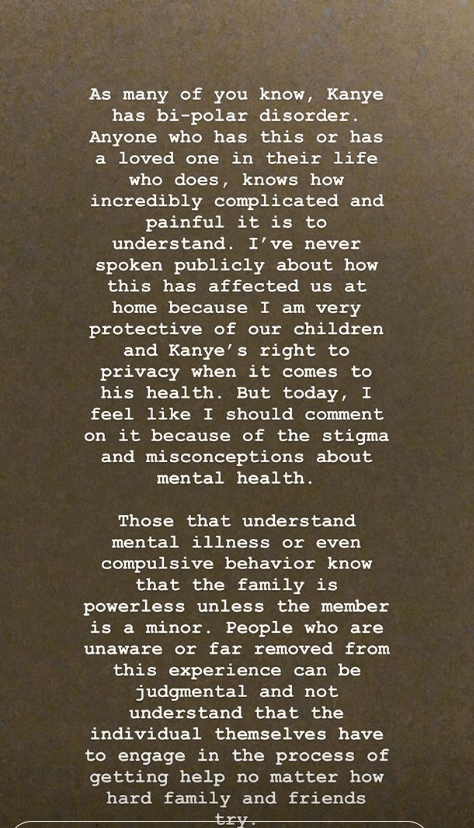 “As many of you know, Kanye has bi-polar [sic] disorder. Anyone who has this or has a loved one in their life who does, knows how incredibly complicated and painful it is to understand,” Kim Kardashian tweeted Wednesday

“I’ve never spoken publicly about how this has affected us at home because I am very protective of our children and Kanye’s right to privacy when it comes to his health. But today, I feel like I should comment on it because of the stigma and misconceptions about mental health.” 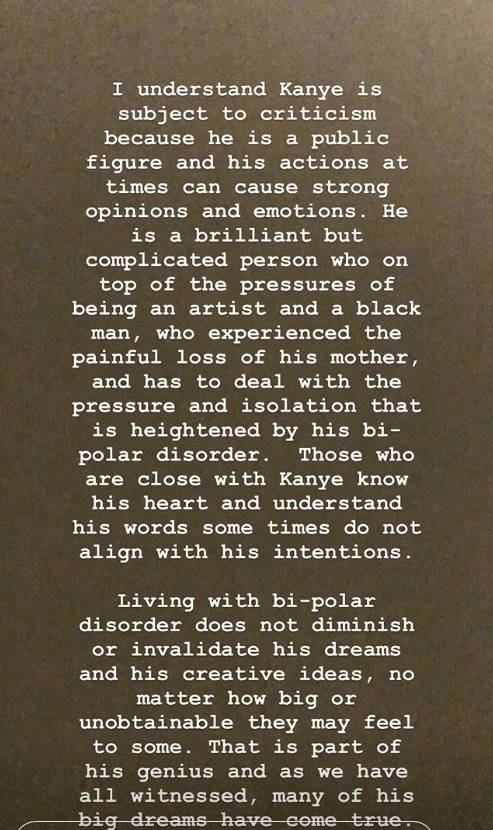 Kim Kardashian wrote that she “understands” her husband is “subject to criticism because he is a public figure and his actions at times can cause strong opinions and emotions.” 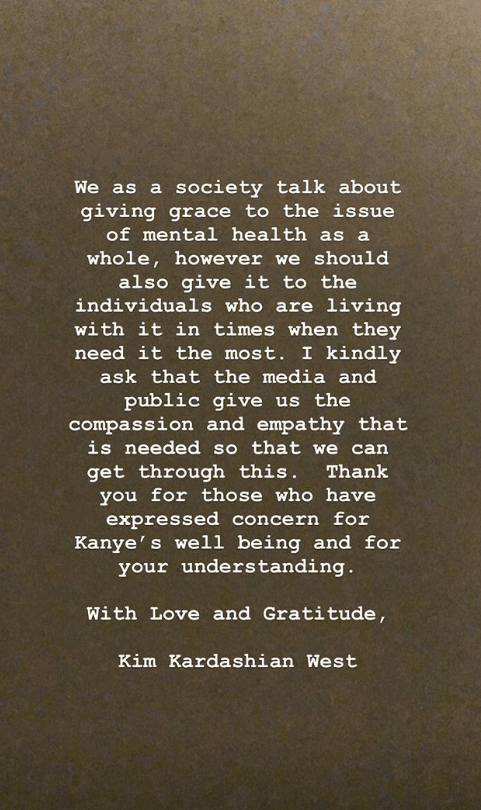 However, she noted that, “he is a brilliant but complicated person who on top of the pressures of being an artist and a black man, who experienced the painful loss of his mother, has to deal with the pressure and isolation that is heightened by his bi-polar disorder. Those who are close with Kanye know his heart and understand his words some times do not align with his intentions.”

Kardashian concluded with a plea for understanding about mental illness.

“We as a society talk about giving grace to the issue of mental health as a whole, however we should also give it to the individuals who are living with it in times when they need it the most,” Kim concluded her note. “I kindly ask that the media and public give us the compassion and empathy that is needed so that we can get through this. Thank you for those who have expressed concern for Kanye’s well being and for your understanding.”

West announced his candidacy for the White House on July 4. Since then, his on-again, off-again candidacy has generated intense media and public interest. He held his first campaign event in South Carolina on Sunday, but failed to land a spot on the state’s presidential ballot.