A British theme park is the latest organisation to offer segregated events in an attempt to be culturally sensitive towards its Muslim visitors. Water World, in Stoke-on-Trent, in Britain’s West Midlands region, is hosting “sisters only” and “brothers only” events, demanding visitors wear “Islamically appropriate” attire.

The water-park – which claims to attract nearly half a million visitors a year – is believed to have hosted dozens of events over the past few years, with “Islamic Fundays” as well as fundraising events for Gaza charities dating back as far as 2009.  The park even goes so far as to claim that female “guards” will keep men out of the venue for the day.

Water World’s website reads: “Our sisters only event is an event restricted to female gender only and boys up to the age of 4 years old. All rides and attractions are open as normal. Clothing during this event must be both culturally and islamically appropriate for the event. There is a designated prayer area located in the reception area. All windows are blacked out with only female staff/lifeguards on duty throughout the night, Female staff will guard the front entrance to make sure that no males enter the facility.” 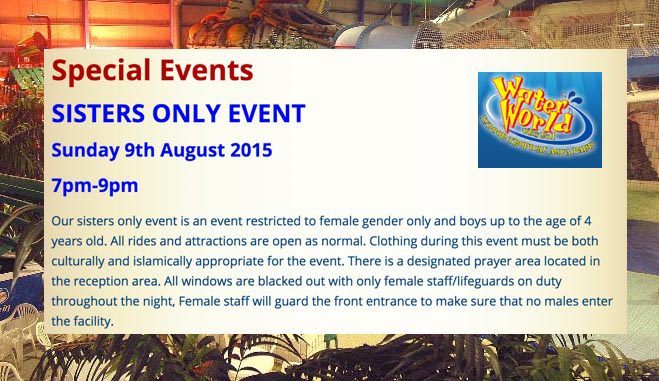 Breitbart London has seen other invitations to the water park, on behalf of Islamic charity Interpal, which has hosted fundraising events for Gaza. Interpal has been accused of fundraising for the Hamas terrorist organisation on three separate occasions, and while it has been cleared by Britain’s Charity Commission, one of their recent findings also claimed that Interpal “had not put in place adequate due diligence and monitoring procedures to be satisfied that these organisations were not promoting terrorist ideologies or activities. Where procedures were in place, they were not sufficient nor fully implemented”.

The group was also forced to sever any links to the ‘Union of Good’ group, which, according to the U.S. government, was “an organization created by Hamas leadership to transfer funds to the terrorist organization.”

One invitation to a “Sisters Only Funday” even went so far as to promote certain types of clothing. It reads:

Dress Code Please ensure that your Awrah [nakedness] is covered at all times. Below are a few suggestions on what you can wear: Top Long Loose T-Shirt/Top. Bottoms Leggings 3 Quarter/Full Length Jogging Bottoms. We would also suggest wearing a leotard under the T-shirt or belt over it as it is likely to float up when you enter the water. A dark coloured T-shirt is recommended as white can become transparent when wet.

The most recent ‘Sisters Only’ day was held on May 17th 2015. The “cause”, it stated, was “Rebuilding Lives in Gaza – Providing Clean Water”, this time hosted by the ‘Human Appeal‘ international charity, which is listed on an unverified CIA report from 1996 into “NGOs (non governmental organisations) with Terror Links”. Human Appeal reject the validity of the document, despite it being cited by the Centre for Strategic and International Studies in the 2007 book, “Understanding Islamic Charities“.

The Australian Broadcasting Corporation website still carries a report from 2003 that states: “The document, obtained by Lateline, outlines a close relationship between Human Appeal International and Hamas, as well as the US-based Palestinian charity the Holy Land Foundation For Relief and Development, which was raided and shut down three months after the September 11 attacks,” and Wikileaks reveals that a State Department cable from 2005 stated, “In 2003, there were indications that HAI was sending financial support to organizations associated with Hamas and that members of its field offices in Bosnia, Kosovo, and Chechnya had connections to al-Qa’ida associates”. It is not clear which Human Appeal organisation these reports refer to.

The GulfNews website however goes further, and continues to host a diagram linking Human Appeal (UK) to the UAE organisation, and ultimately, Hamas. Human Appeal was banned in 2012 from hosting an event at Manchester Parrs Wood High School. Britain’s Department of Education stated: “Since the concerns about HAI have come to light, Parrs Wood has performed further research including consulting local Jewish community representatives. As a result they have decided not to allow HAI or other charities which appear to have links to political organisations to use the school in future.” 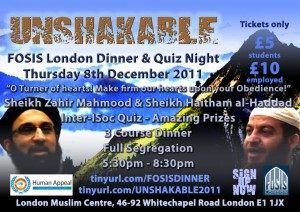 And Human Appeal has hosted speakers such as Haitham al-Haddad, Raed Salah, and Zahir Mahmood, who have been widely criticised for “extremist” rhetoric.

Haddad, who spoke alongside Mahmood at a 2011 Human Appeal event, has said: “Jews… are the enemies of God and the descendants of apes and pigs” and is reported to have praised Osama Bin Laden. Salah was excluded from the UK by Home Secretary Theresa May in 2011, before successfully appealing her decision later in the year.

Human Appeal also advertises for positions on the Muslim Council of Britain website, an organisation often linked to the Muslim Brotherhood, officials from which signed the ‘Istanbul Declaration’ in 2009 – a document that called for attacks on British soliders as well as the Jewish community.

Water World was first opened in 1989, and was bought by Pakistani businessman Mo Chaudry ten years later. Chaudry has campaigned for UK charities such as the NSPCA, as well as appearing on the television programme Secret Millionaire.

The Water World Sisters Only events have advertised prayer areas, halal food options, same sex staff options, and claims that all windows can be covered to add extra privacy upon request.

Britain’s theme park Legoland had previously come under fire for hosting a “Muslim Family Day” with the aforementioned Haitham al-Haddad, as reported by Breitbart London.