The German Chancellor, Angela Merkel, has condemned protests that erupted on Friday near an asylum center in East Germany as “abhorrent” and “shameful.” Several police were injured in violent clashes later that evening, which are being blamed on the far right and compared to PEGIDA .

German news reported the violent incidents in Heidenau, near Dresden, on Friday night, which followed a larger, peaceful demonstration earlier in the evening. The peaceful demonstration was organised on Facebook page, by a group that the BBC claimed to be linked to the National Democratic Party of Germany (NDP).

Angela Merkel to visit migrants shelter at Heidenau which was attacked over the weekend,@jennyhillBBC #migrantcrisis pic.twitter.com/Zh8Aw1ZuZS

The NDP do have neo-Nazi links, but the press has attempted to implicate by geographic proximity the unrelated and peaceful PEGIDA movement, which happens to hail from the region where the violence occurred. The Times claimed:

“A mob — some of them chanting “Heil Hitler” — attacked police protecting a migrant shelter in Heidenau, near Dresden, at the weekend. The town is at the centre of a movement called Pegida, or Patriotic Europeans Against the Islamisation of the West.”

Speaking ahead of talks with French President Francois Hollande, Merkel said: “It is repulsive to see how right-wing extremists and neo-Nazis are voicing their hatred.” Adding: “But it is just as disgraceful to see how German citizens, and even families with children, are supporting this by marching along with them.”

Opposition to mass immigration and institutionalised multiculturalism in Germany has become far more diverse and mainstream in recent years. PEGIDA attracts families and members of the middle-classes and the Alternative for Germany (AFD) party has tapped into a similar vein of support enjoyed by UKIP in the UK.

Markel’s dog whistle attack on PEGIDA is nothing new. Such populist sentiments and movements are continually conflated with Neo-Nazi organisations in German politics, particularly when demonstrations occur in close proximity, usually at centers of mass immigration and demographic upheaval. 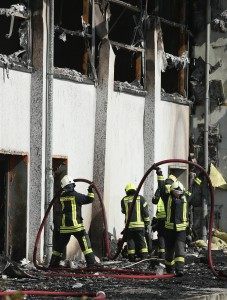 NAUEN, GERMANY – Firemen attend a fire at a sports hall intended to house refugees and migrants applying for aslyum.

Merkel is also due to visit a school hall – that was being turned into temporary accommodation for asylum seekers – which burnt down recently. The Prime Minister of the Brandenburg region, where it is located, has labeled the attack “shameful” and promised a “zero tolerance” approach to protestors, Der Spiegel reports.

The school hall was due to house about 100 of the 750,000 to 800,000 refugees Germany is expected to receive this year. Since January, there have been about 200 attacks on asylum shelters in Germany.

The chancellor met with French president Francois Hollande yesterday for emergency talks on the migrant crisis. The talks follow Jean-Claude Juncker, the president of the European Commission, demanding a permanent quota system across the EU writing in French and German papers yesterday morning – despite his defeat on a temporary emergency measure in May.

Merkel gave her support to the plans after the meeting with Hollande, saying: “For those who have a right of residence in the European Union, there must be a fair sharing of the burden. This fair burden-sharing is currently not ensured.”