Two Dutch film makers have been attacked in the infamous Calais Jungle camp by migrants wielding pepper spray and a knife. Members of the Calais Migrant Solidarity group have urged them to remove the clip from the Internet, stating menacingly: “You are not doing yourself a favour by putting it online as I think this is not what you came for to Calais…”

Ms. Engels released the clip, taken while filming her new documentary, “Calais: Welcome to the Jungle,” via her YouTube account. 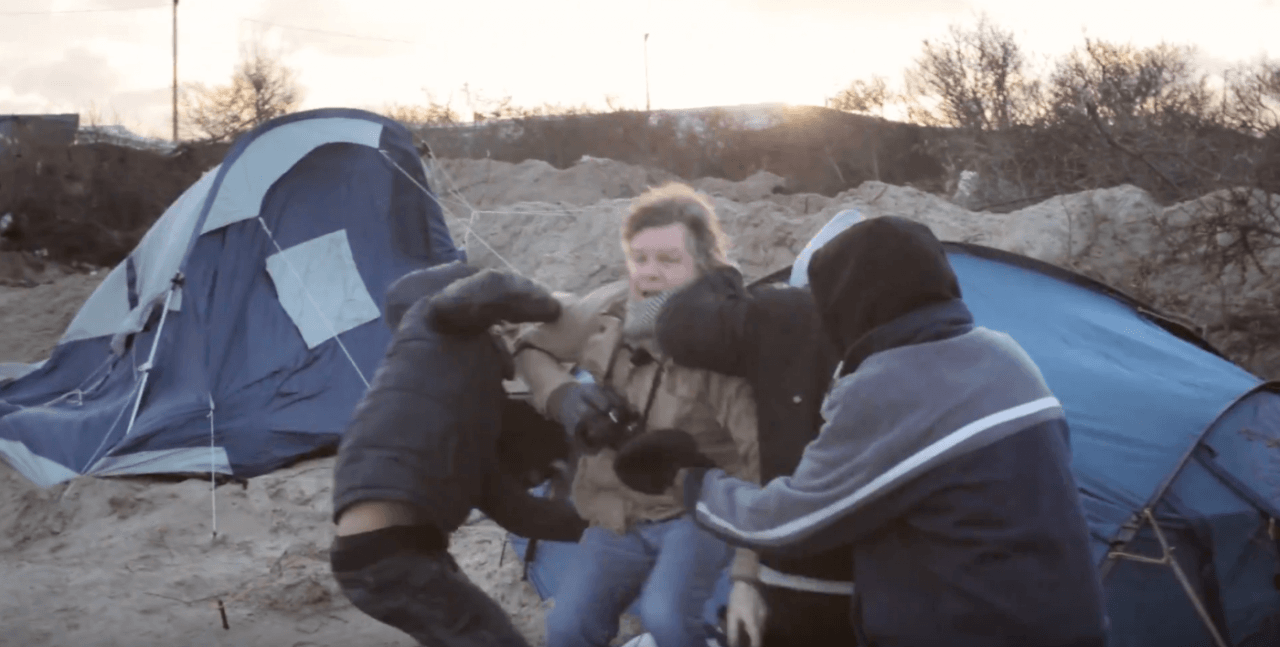 The video captures the moment of horror

The clip, which only lasts 41 seconds, clearly shows her colleague and photographer Teun Voeten being attacked and thrown into a tent while three men pin him down. The perpetrators then proceed to run off down the makeshift streets of the migrant settlement.

Mr. Voeten is a longstanding contributor to outlets such as Vanity Fair, the New York Times Magazine, National Geographic, Newsweek, and Time magazine – the latter of which named German Chancellor Angela Merkel as their Person of the Year in 2015. He has also worked with Medicins San Frontieres, the United Nations High Commissioner for Refugees, and Amnesty International. 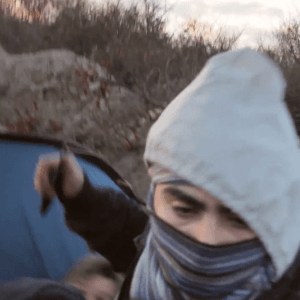 One migrant wields a knife

The description in the video alleges that the pair were set upon by three migrants armed with a “big knife” and pepper spray. The attackers attempted to rob the pair before other migrant residents of the Jungle were able to chase them off.

Ms. Engels posted the video on her Facebook along with her reaction to the attack, describing the men who robbed her as, “a couple of assholes,” then going on to make excuses for her attackers, saying they are likely to become criminals because, “they’ve got nothing higher to aim at”.

Another post by Ms. Engels from the day before the incident describes meeting a migrant named Muhammed who is a former English literature student in the Calais migrant camp.

She appears to reach out to her friends and followers to find the easiest way to get Muhammed into the UK, and find a way for him to pay reduced student fees.

Ms. Engels laments that the legal-aid volunteers are not sure how to procure Muhammed a student visa into the UK and says she fears he will remain in Calais and, “waste his life in this hopeless, dreadful sh**hole.”

Photographer, and victim of the attack, Teun Voeten also posted the footage on Facebook to the group “Calais Migrant Solidarity (no borders),” and was met with comments urging him to remove the footage. 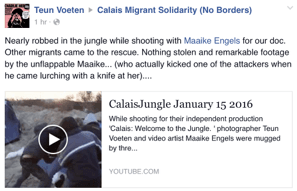 One comment went as far to say, “You are not doing yourself a favour by putting it online as I think this is not what you came for to Calais…” while another added: “In the wrong hands this footage could be used irresponsibly”.

Not even a “hope you’re okay”

Ms. Engels told Breitbart London: “We have been documenting the jungle since September. What we want to achieve is to show the complexity of the immigration problem. The story is not one-sided but what is shown (and asked for by the media) is so much driven by emotions. No durable policy can derive from that. First Aylan [Kurdi], then Paris, now [Cologne]. We just don’t want to take positions. [We want to] show all points of view. Both the refugees as well as the opponents”.

The organisation responsible for the social media page – Calais Migrant Solidarity – is part of the No Borders Network which campaigns for the removal of national borders and for an end of deportation of illegal migrants.

Violence in the Calais Jungle migrant camp is not a new phenomenon. As the camp has become larger and larger, attacks have become more common. Migrants attack each other and are even violent toward aid workers trying to deliver food and supplies.

A French police union spokesman has even accused left-wing activists and people smugglers of routinely inciting violence in the camp.

The camp is located next to a motorway that thousands of transport trucks use every day, shipping goods from mainland Europe to the United Kingdom. Migrants camp out in the hopes of sneaking on to the trucks to gain entry to Britain – often endangering the lives of the truckers in the process.

This video comes at a crucial time for the Calais migrant camp as French officials announced their plans to demolish the encampment and force residents to move by January 18th. The BBC reports that the move is to combat poor living conditions in the camp and trade the tents currently being used for housing and replace them with converted shipping containers.

Breitbart London reported on the London2Calais ‘open borders’ demonstration that took place at London’s St. Pancras station on Saturday 16th January. Activists at the rally claimed politicians and the media ”