Left wing activists have projected the words ‘Refugees Welcome’ on the White Cliffs of Dover ahead of Saturday’s showdown between neo-Nazis and anti-fascists in the nearby town.

The activist group Global Justice Now transformed the iconic geological feature, which is first sight of British soil many new arrivals catch, into a political statement on Thursday night.

“[This] projection, alongside these efforts across the country, presents an alternative vision of the UK, one built on compassion, solidarity and recognition of common humanity”, said Nick Dearden, the director of Global Justice Now.

“Far right groups are coming to Dover to fan the flames of hatred and xenophobia, often generating a lot of media coverage in the process” he added in a statement, referring to the “Stop the Fakeugees and Gimmigrants” protest planned by various fascist groups in Dover this weekend.

Last time such groups descended upon Dover in January, the anti-fascists vastly outnumbered them and instigated the majority of the violence. 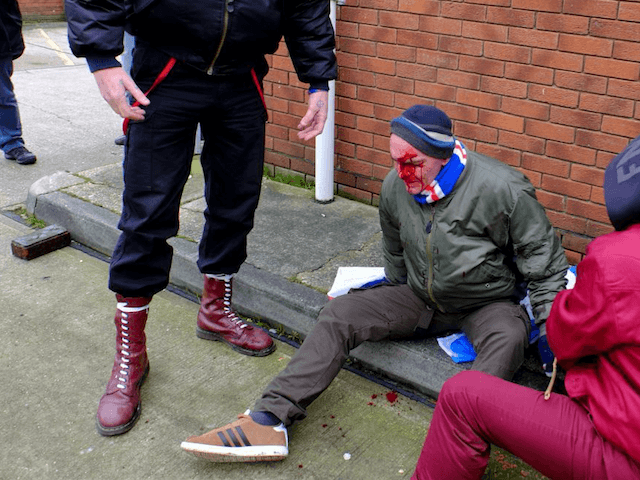 “But across the UK thousands of groups and communities are acting in many different ways to offer practical and personal support to refugees who have fled desperate circumstances to get here”, continued Mr. Dearden.

He also argued that we should “open the borders” because Lebanon, which neighbors Syria, has been forced into become one of the few Muslim majority nations to accept migrants.

“We should be welcoming refugees, especially given the UK has often played a very active role in generating the crises of war, poverty and inequality that are often forcing people to flee. The UK is not ‘full’. Lebanon, a country half the size of Wales, has taken in one million Syrian refugees.

“It is perfectly possible for the UK to take far more migrants than we currently see. The response of British and other European governments to the so-called ‘migrant crisis’ betrays all of the principles our societies are supposed to uphold. You cannot build a decent society of fear and hatred. Opening our borders is a step towards creating a more equal world”, he wrote.

“Last night’s projection, alongside these efforts across the country, presents an alternative vision of the UK, one built on compassion, solidarity and recognition of common humanity.”