That Multicultural policies and a lack of integration may have directly fuelled violent extremism, is “one of the most significant findings” of the What British Muslims Really Think survey and documentary, presenter and former Labour politician Trevor Philips said. 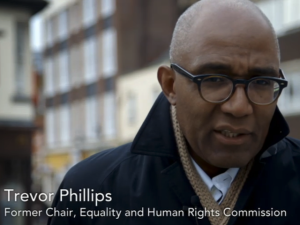 In order to promote national security he suggested ending the “live and let live” approach to Muslims, and instead suggested forcefully assert British values.

What is the most extensive survey of opinions and attitudes among British Muslims ever conducted, commissioned by Channel 4, found that Muslims who sympathies with violent jihad are around twice as likely to prefer to live a more separate, un-integrated life in Britain than those who don’t.

The survey found that more than 100,000 Muslim living in the UK harbour some degree of support for jihadist mass murder in the name of Islam.

Furthermore, only 34% would inform the police if they thought somebody they knew was getting involved with people who support terrorism in Syria.

The director of ICM Research, who conducted the survey, explained for the programme that a number of other attitudes correlate with such a sympathy towards violent jihad. There were, “things that explain why people might move down the path towards violence”, as he put it.

These include a lack of social belonging; no desire to integrate; wanting a fundamentalist Islamic lifestyle; and wanting sharia law here in the UK.

“I think that this is one of the most significant findings of this survey”, said Trevor Philips, New Labour’s diversity guru who served as the Chairman of the Equalities and Human Rights Commission (EHRC) from 2003-2012, and introduced the word “Islamophobia” to Britain.

Unlike the Labour MP for Birmingham Khalid Mahmood, Mr. Philips dismissed other explanations for violent, anti-Western Jihad such as foreign policy, mental health and poverty with a dismissive “maybe”, and explained:

“What we do know from this survey is that Muslims that have sympathy for violence are significantly more likely to hold illiberal views on gay rights and women’s equality that those who don’t.

“Our ‘live and let live’ culture may have unwittingly provided fertile ground for extremist thinking to flourish”, he added.

Continuing later: “To stand a chance of success[ly integrating Muslims] the whole of Britain may have to set aside the ‘live and let live’ philosophy that paved the way for separation and reassert the liberal values that have served our society so well for so long”.

However, he also asserted: “Everyone who has pinned their hopes on the rise of reforming and liberal British Muslim voices are in for a disappointment… The prospects for integration do not look good.”