Alarmist scientists are trying to cover up the good news that rising CO2 levels are making the planet turn greener. And that even includes one of the scientists who made the discovery in the first place.

The discovery was first announced in 2012 in a lecture by Professor Ryanga Myneni of the University of Boston.

Rising CO2 levels are causing the planet to get greener, Myneni revealed. In the last 30 years, he estimated, the planet’s greenery has increased by 14 per cent. About half of this, he calculated, was a direct result of increased carbon dioxide levels, rather than of other factors like warmth, irrigation or fertilisers. And the area covered is vast:  as Myneni’s co-author Zaichun Zhu, of Beijing University, puts it, it’s equivalent to adding a green continent twice the size of mainland USA. 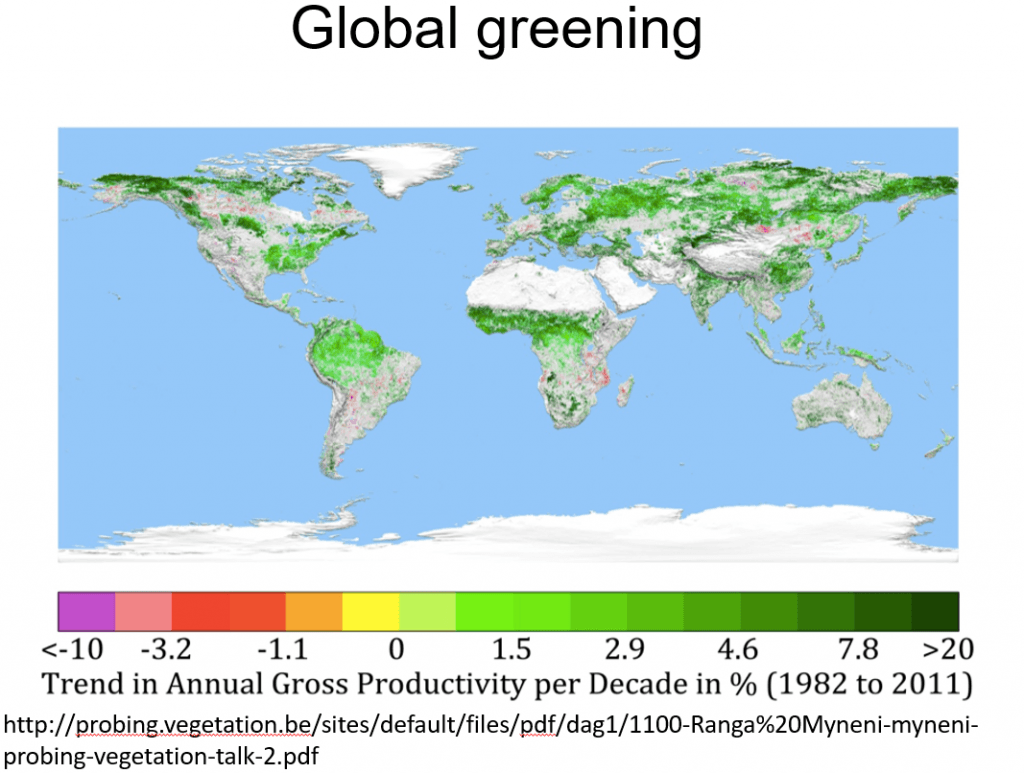 What’s more, Myneni showed, this greening is taking place across the board, in all manner of vegetation: tropical rain forests, subarctic taiga, grasslands, semi-deserts, farmland, the lot. 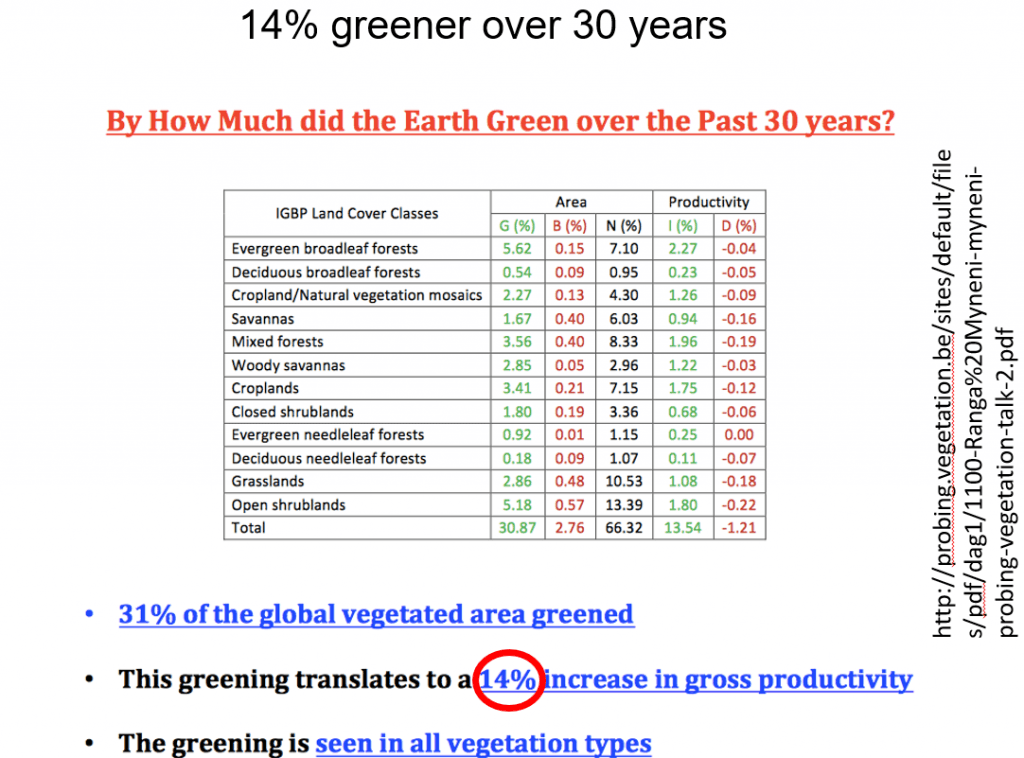 We have reported on this greening before at Breitbart here and here – and, of course, it’s very good news. But it hasn’t been widely circulated in much of the media for reasons which will soon become clear.

The first person to break the good news was science author and journalist Matt Ridley, who wrote it up in the Wall Street Journal in a piece titled How Fossil Fuels Have Greened The Planet.

Did you know that the Earth is getting greener, quite literally? Satellites are now confirming that the amount of green vegetation on the planet has been increasing for three decades. This will be news to those accustomed to alarming tales about deforestation, overdevelopment and ecosystem destruction.

Perhaps unsurprisingly, the notion that CO2 could be beneficial was not something the greenies wanted to hear. And that included the co-author of the study Ryanga Myneni, who did everything he could to discredit Ridley’s (entirely accurate) account of his study.

Ridley described what happened next in his recent Global Warming Policy Foundation lecture at the Royal Society in London.

At the end of 2015, when his paper had been under peer review for eight months so he knew these results were coming, Dr Myneni, criticized me specifically, saying on a green blog that “[Ridley] falsely claims that CO2 fertilisation is responsible for the greening of the earth”. Yet a few months later he himself published evidence that “CO2 fertilisation explains 70% of the greening trend”.

In the press release accompanying the article in April 2016 he once again referred to me by name:

[“The beneficial aspect of CO2 fertilization in promoting plant growth has been used by contrarians, notably Lord Ridley…to argue against cuts in carbon emissions to mitigate climate change…”]

As Richard Tol commented: “The new paper vindicates what Matt Ridley and others have been saying all along — yet they apparently deserve to be kicked nonetheless.”

I wrote to Dr Myneni politely asking him to justify his criticism of me with specific examples. He was unable to do so. “There are no ‘up-sides’ to having too much CO2 in the air,” was all he said.

Even now, Myneni is determinedly trying poo poo the significance of his own study. In response to Ridley’s lecture he has issued an official statement at the University of Boston website, again pouring scorn on Ridley.

Q: Is Greening not a good thing?
A: We do not fully understand the CO2 fertilization effect. Experiments do indicate a fertilization effect and higher water use efficiency. The same experiments also indicate diminishing effects over time. Moreover, we do not know how much of what we observe in experiments translates in to the real world. Much of this has to do with how nutrient limitations would play out when CO2 becomes abundant. In short, there is no evidence to count on CO2 fertilization benefit. Personally, I would not buy the fertilization benefit for the price of global warming (and all the impacts that this warming implies).

Q: Are Climate Change (Global Warming) and attendant impacts real?
A: Lord Ridley discounts global warming and impacts. Yet, he is all for the fertilization benefit. He starts his talk with the statement “I am a passionate champion of Science” and goes on to ignore 30+ years of IPCC assessments! What is worse, he assumes that the people behind the science have malevolent motives (suppressing publication of our work … etc). How sensible is it to argue that thousands and thousands of scientists are somehow in cahoots to push the global warming hoax on innocent people of the world …

Careful readers – and you really don’t need a PhD to see through this: indeed it’s probably a disadvantage – will note that at no stage do Myneni’s disclaimers actually contradict the facts of his study, as faithfully and accurately reported by Ridley. His answer to the second question is just a succession of rhetorical fallacies: ad hominem, straw man, appeal to authority; his answer to the first, effectively admits that Ridley’s interpretation is correct – “experiments do indicate a fertilization effect and higher water use efficiency” – but then tries to fudge his way out with a few airy denials.

The other key accusation Ridley makes is that Myneni and his colleagues may deliberately have sought to delay publication of their report, lest skeptics take too much pleasure in it.

Myneni’s results, however, remained unpublished. I was puzzled by this. Then I realized that one of the IPCC’s periodic assessment reports was in preparation, and that probably Dr Myneni and colleagues might delay the publication of their results until after that report was published, lest “the skeptics have a field day” with it.

That last phrase, by the way, is from one of the Climategate emails, the one on 22 September 1999 in which Dr Michael Mann approves the deletion of inconvenient data.

Sure enough, Myneni’s results were eventually published three years later in April 2016 in a paper in Nature Climate Change, with 32 authors from 24 institutions in eight countries – when the IPCC report was safely in the public domain and the great Paris climate jamboree was over.

Myneni makes his lengthy excuse at the Boston website, which I wouldn’t bother reading unless you’re feeling very patient. My translation: “A very enormous dog ate my homework.”

The Alarmist media, it goes without saying, are taking Myneni’s side in this. The BBC’s house eco-loon Roger Harrabin had this to say on Twitter:

So this is where we’re at in the climate debate. And an extraordinary place it is too. Scientists on the global warming gravy train, it seems, are so desperate to prop up the alarmist narrative – and the generous grant-funding that goes with it – even to the point of denying the significance of their own research.