The rate of suicide for men under the age of 30 increased last year, new figures from the Office for National Statistics (ONS) have revealed.

And while the rate of suicide for women is marginally up, male suicides still outnumber female suicides three to one.

Males aged 45 to 59 continued to have the highest suicide rate, at 22.3 deaths per 100,000 population, a rate which is significantly higher than for other male age groups barring the 30-44 age range, although it has decreased steadily since 2013.

But suicides among males under 30 were up, from 9.9 in 2014 to 10.6 per 100,000 last year. This makes them three times more likely to commit suicide than their female contemporaries. 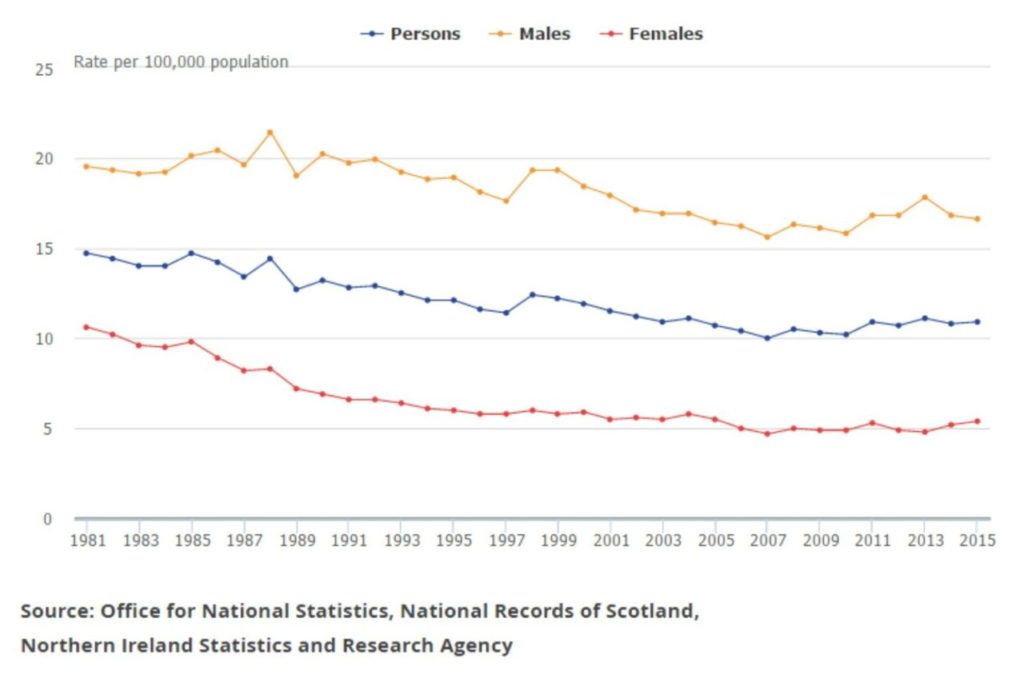 The headline rates also mask huge regional disparities. Suicide rates in Northern Ireland, Scotland, and Wales are higher than for any English region, and in 2015 increased in all countries except England.

By contrast, the male suicide rate decreased in England fell from 16.0 to 15.4 deaths per 100,000 population in 2015. Researchers note: ”This was the second year-on-year decrease observed in England, but it is still too soon to tell if this is the beginning of a decreasing trend.”

Jodie Withers, an analyst at the Office for National Statistics said: “While the increase in the suicide rate this year is a result of an increase in female suicides, males still account for three quarters of all suicides. There has also been a continued increase in suicides for males under the age of 30, however, these remain lower than the peak seen in the late 1990’s and remains significantly lower than the suicide rate for middle-aged males despite falls in recent years.”

The ONS figures are based on deaths registered, rather than deaths occurring in each calendar year. The report notes: “Due to the length of time it takes to complete a coroner’s inquest, it can take months or even years for a suicide to be registered.”

If you are struggling to cope, please call Samaritans for free at any time, from any phone on 116 123 (UK and ROI), email jo@samaritans.org, or visit the Samaritans website to find details of the nearest branch.