SALZBURG, Austria (AP) — European Council President Donald Tusk warned Britain on Wednesday that key parts of its offer to conclude Brexit talks are not satisfactory and must be revised, just six months before the country leaves the bloc.

Speaking before chairing a summit of EU leaders in Salzburg, Austria, Tusk ramped up pressure on Prime Minister Theresa May’s Conservative government, saying time was fast running out to seal a Brexit deal. Britain will leave the EU at midnight on March 29, but both sides are desperate to reach an agreement in coming weeks to leave parliaments time to ratify any accord.

Pointing to shortfalls in Britain’s position on keeping open the Irish border and on economic cooperation, Tusk said told reporters that “the U.K.’s proposals will need to be reworked and further negotiated.”

The main stumbling block to concluding a Brexit deal is an agreement that would keep goods, services and people flowing between EU member state Ireland and Northern Ireland, which is part of the U.K. Both sides have made counter-offers in recent days, and May is expected to urge EU leaders in Salzburg to compromise.

Relying on pressure caused by the ticking clock, Tusk said “every day that is left we must use for talks. I would like to finalize them still this autumn.” He said he would urge the leaders to hold a new summit in mid-November, meaning that the heads of state and government would meet once a month to get the job done. 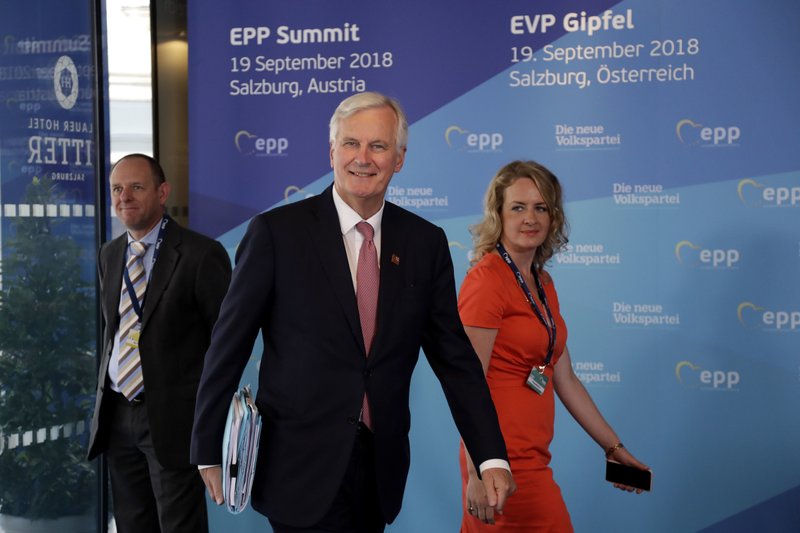 EU chief Brexit negotiator Michel Barnier warned on Tuesday that the leaders’ Oct. 18 summit in Brussels would be “the moment of truth.”

But writing in German newspaper Die Welt, May said Britain “has evolved its position” and argued that “the EU will need to do the same.” She said that a divorce deal is within grasp if both sides show “good will and determination.”

The border conundrum could yet dash those hopes.

Both sides have pledged to ensure there’s no hard border around Northern Ireland. The EU is offering to de-facto keep the territory in the bloc without erecting a physical border. Barnier says that could be done by checking goods destined for Northern Ireland at companies and markets within the UK.

But London says this would undermine the U.K. single market. May wants to keep the entire U.K. in the European single market and customs union for goods only, and for a limited time.

For the EU though, that amounts to cherry picking the best parts of being an EU member.

May argues that the U.K. and the EU face a choice between her proposal — which would keep Britain aligned to the EU rulebook in return for seamless trade in goods — and an economically disruptive Brexit in which Britain crashes out of Europe without a deal.

“Neither side can demand the unacceptable of the other, such as an external customs border between different parts of the United Kingdom,” May wrote in Die Welt.

Barnier said the EU is not proposing “a border, neither on land or at sea.”

“It is a set of technical controls and checks, a lot of which, most, can be put in place and carried out in places other than physically in Northern Ireland,” he said.

Pro-Brexit members of May’s Conservative Party also oppose her deal, saying it would keep Britain tethered to the bloc, with no say over its rules and unable to strike new trade deals around the world.