Boris Johnson’s Greenest Government Evah has come up with a brilliant new excuse to duck its responsibilities for all the floods now swamping parts of Britain: climate change ate our homework.

From Hereford to Shrewsbury and South Wales to North Yorkshire, swathes of Britain are underwater thanks to flooding in the aftermath of Storm Dennis, which so far has claimed five lives. There are currently more than 400 flood warnings around Britain, with more heavy rain forecast to come.

But the government has effectively absolved itself of responsibility by pinning the blame on ‘climate change.’

Environment Secretary George ‘Useless’ Eustice has said in an interview with LBC radio that the scale of the flooding is due to the ‘nature of climate change’.

Sir James Bevan, the chief executive of the Environment Agency, has gone a step further by blaming ‘the climate emergency.’ 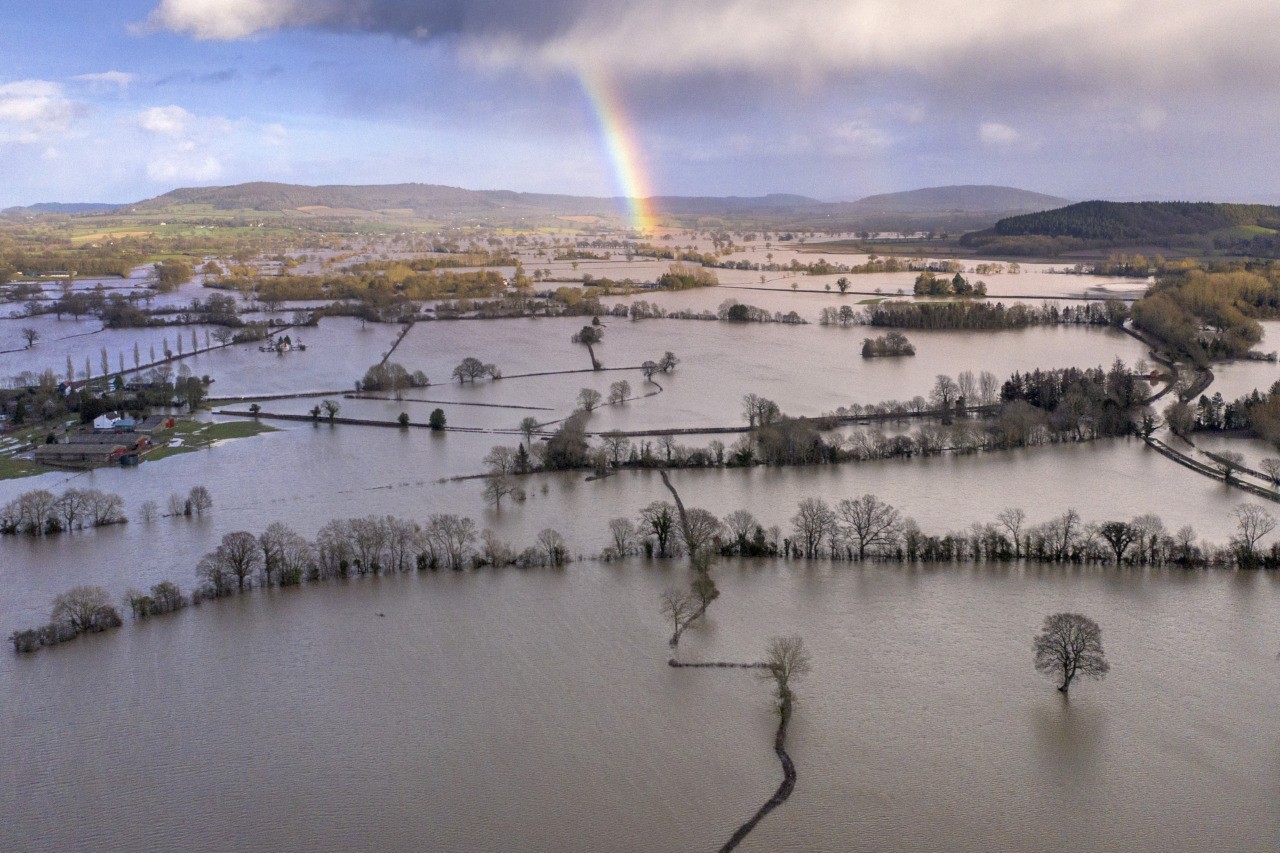 HEREFORD, ENGLAND – FEBRUARY 17: A rainbow appears over flooded fields in the Wye Valley, near the hamlet of Wellesley, following Storm Dennis on February 17, 2020 in Hereford, England. Storm Dennis is the second named storm to bring extreme weather in a week and follows in the aftermath of Storm Ciara. (Photo by Christopher Furlong/Getty Images)

None of this is true. There is no evidence whatsoever to suggest that these floods are anything other than an entirely normal, cyclical event which has been repeated many times over many centuries — with or without the contribution of anthropogenic CO2.

However the only grown-ups in government making this point are the kind of old school Conservatives with absolutely no chance of promotion in Boris’s new, green-obsessed regime of eco virtue-signalling cant.

One is former Environment Secretary Owen Paterson, whose Shropshire North constituency is among those most severely flooded.

“It has always rained in the UK in winter. The trick is to get it to go down again. You have to manage the countryside and manage the rivers. It is a complete cop-out to blame it all on climate change.”

Paterson also happens to be the last Environment Secretary to have understood that flooding is, in part, a man-made disaster – the result not of ‘climate change’ but of terrible, European-Union-driven environmental policy.

Here is what I wrote the last time there was a major flooding crisis which, again, the fake-Conservative government of the time – along with sundry eco-loons such as Bill McKibben – attempted to pin on climate change.

British rivers have always been prone to flooding because Britain is a kingdom of rains (where royalty comes in gangs).

But traditionally, those living in flood-threatened areas have been able to mitigate the problem by making sure that their rivers are well dredged – and thus able to flow freely. […]

So what changed? EU Regulation, that’s what.

Thanks to the European Water Framework Directive – which passed into UK law in 2000 and which is enforced by the Environment Agency – the emphasis has shifted from preventing flooding to encouraging it.

Yes, you read that right.

Under EU legislation, dredging rivers is considered environmentally unfriendly because it takes them away from their “undisturbed”, “natural” state.

You can see why this EU-driven laissez-faire policy might appeal to government ministers: doing nothing — and being able to blame EU policy — is much cheaper than doing something.

What the evidence shows is that dredging works. One of the areas hardest hit by the floods of six years ago was the Somerset Levels. The problem, it emerged, was lack of dredging and poor maintenance. This was remedied thanks to the intervention of then Environment Secretary Owen Paterson — who was subsequently sacked by Prime Minister David Cameron for being insufficiently on message with the government’s green agenda.

Ironically, as Paul Homewood points out, the flood-prone Somerset Levels are now one of the few regions that have escaped the worst of this year’s floods. 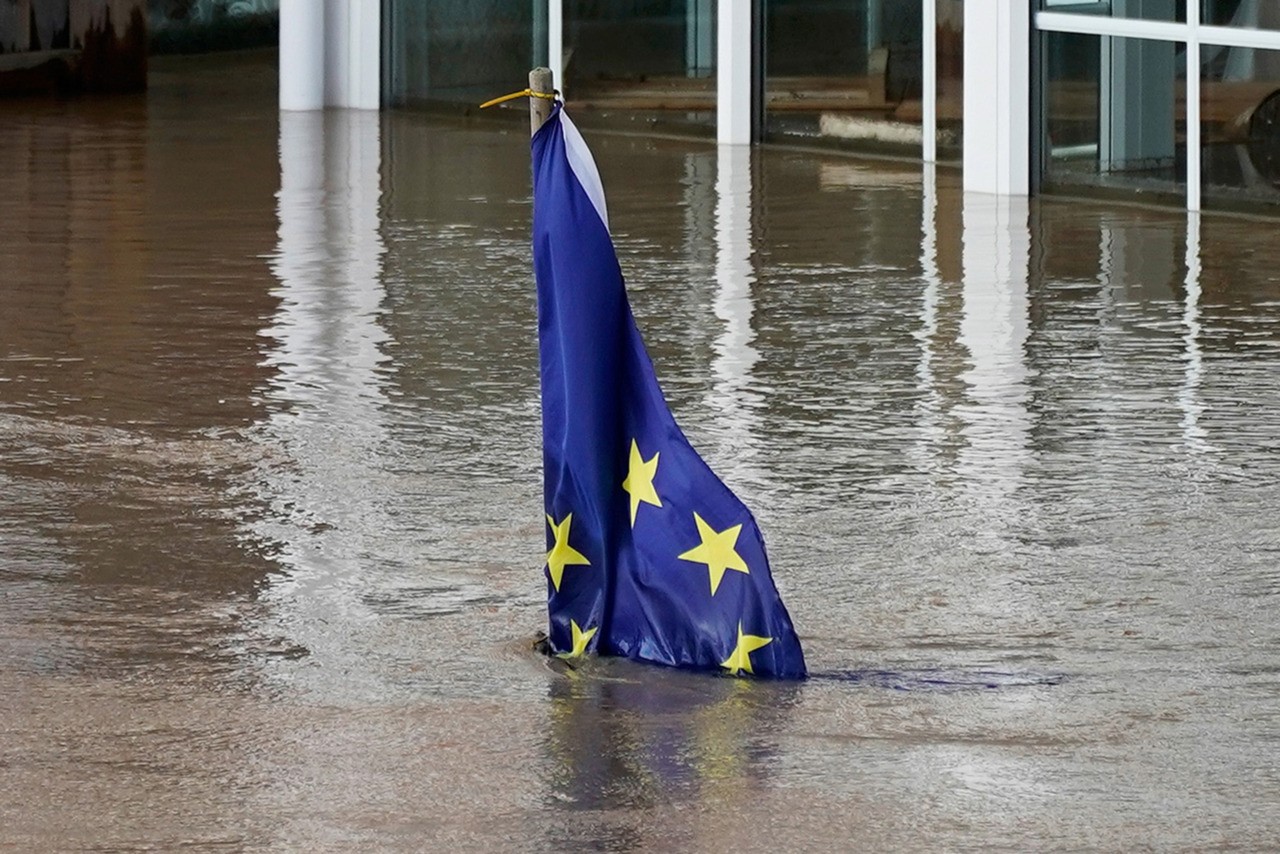 HEREFORD, ENGLAND – FEBRUARY 17: An EU flag flying outside a house is partially covered by the flooding of the River Wye following Storm Dennis on February 17, 2020 in Hereford, England. Storm Dennis is the second named storm to bring extreme weather in a week and follows in the aftermath of Storm Ciara. (Photo by Christopher Furlong/Getty Images)

In a piece headlined No Flooding In Somerset Levels, Thanks to Owen Paterson Homewood notes that there is ‘only one red flood warning on the Somerset levels, despite the pummelling Storm Dennis. In general terms, however, the Somerset Levels are free of floods. A reminder that dredging and other maintenance work can be effective in preventing flooding, providing it is properly coordinated.’

I wonder what my late friend Christopher Booker would make of all this. He reported regularly on the absurdities of EU-driven environmental policy which was unnecessarily exacerbated Britain’s flooding problem.

While I’m sure he would have applauded the piece in his old paper the Telegraph by Jamie Blackett headlined ‘Defeatist officials need to stop hiding behind climate change and take action on floods’, I think he would have been more disheartened by the commentary written on the subject by the paper’s new Environment Editor Emma Gatten.

“Climate change is making the storms hitting Britain more extreme and we are not adequately prepared for what is coming our way.”

But what do you expect when her go-to source of expertise is none other than the discredited and ridiculous Lord Deben, chairman of the Climate Change Committee, who — despite his discreditedness and ridiculousness — has a profound influence on current government policy?

Climate change is not making the storms hitting Britain more extreme: this is pure nonsense.

Nor is there any evidence that the current floods are in any way abnormal or unprecedented.

Homewood again has a good summary of this, including records of floods in the Calder Valley:

There is a useful website, Eye on Calderdale, which has a detailed list of historical floods in the Valley, back to 1615:

Naturally, some of the earlier events were never documented, but a quick count reveals 22 floods in Calder Valley between 1830 and 1895. Dozens more are listed in the 20thC.

Most are what we would regard as “serious”.

There is also a timely report from the Global Warming Policy Forum, pointing out that if even a fraction of the tens of billions the government has spent since 2017 on subsidising renewable electricity had instead been spent on flood defences, Britain would now be a lot more resilient in the face of this latest weather event.

Time for the Govt to get its act together and rebalance its foolish climate policy. People will have to get much more angry, though, before @BorisJohnson is likely to listen. https://t.co/6yAlYexjLB

The UK obviously has the balance of adaptation and mitigation very badly wrong.

As a direct result of costly and ineffective climate change mitigation policies the country has underinvested in adaptation measures. These measures are very effective and “no regrets” policies because they yield dividends immediately and protect citizens against flooding and other natural disasters whether they are related to climate change or not.

All political parties must take a share of the blame for this costly failure. It should be noted, however, that the fixation with climate change mitigation via renewable energy is largely the result of decisions taken by the European Union. That can now change.

The opportunity of rebalancing UK climate policy is one of the most significant Brexit dividends and should be seized without delay.

Indeed. But no one with any influence in the government appears to be listening.