Nigel Farage has condemned Black Lives Matter in the United Kingdom as a “dangerous, Marxist organisation” backed by the likes of George Soros and “Hell-bent” on overturning society.

The Brexit Party leader said he was “utterly appalled” by the violence across the United Kingdom over the weekend.

“[T]he tearing down of the Edward Colston statue in Bristol… for the second day in a row, Winston Churchill’s statue in Parliament Square being defaced… a mob around the statue screaming ‘Churchill was a racist’; we saw another assault on the Cenotaph, this time with some yob climbing up there and trying to set fire with a cigarette lighter to the Union Flag — these were just some of the highlights from what happened in the United Kingdom,” he observed in the message posted to his YouTube channel.

The veteran campaigner poured scorn on the BBC for portraying the Black Lives Matter as “so peaceful and so wonderful” after multiple “violent and ugly” protests, with “over 50 Metropolitan Police officers” injured — “some of them seriously”.

“And yet, my argument here isn’t against equality of opportunity,” he explained.

“It’s not to say there aren’t still things in society that aren’t perfectly fair — but it is to say this, and to say it very, very clearly: this Black Lives Matter movement is a dangerous, Marxist organisation, hell-bent on anarchy, and we need to wake up, get some facts into our heads, and understand what it is we’re fighting.”

The slogan ACAB (All Cops are Bastards) is deeply offensive to the hard working officers that keep us safe in this city.

Communism is an ideology that has murdered millions and seeing its symbol graffitied in our city is frankly vile. pic.twitter.com/SKuTQTxh29

Farage stressed that that “main agenda” of the movement “is the defunding of the police force — that’s right, they want to effectively close down the established police force in the United States of America, and that’s what the key activists in this country want to do as well.”

“They’re aiming at a radical redistribution of wealth, they’re hinting at assets being taken from private companies and put into the hands of workers — I mean, look, this is a little bit like the 1917 Lenin manifesto which saw the communist revolution in Russia,” he said.

“That’s the kind of thing that we’re dealing with here, and it’s very heavily funded — they’re not short of money; they’ve got some big backers, Soros, others… who want to fundamentally overturn the norms of society as we see them today,” he alleged.

“It’s not about equality of opportunity, it’s about an organisation that is Hell-bent on changing society and is prepared to use violence and anarchy to do so,” he insisted — before condemning Prime Minister Boris Johnson’s near-silence throughout the crisis, and the state’s “policy of appeasement” in general.

Farage also had harsh words for the “idiot” police leader in Bristol who made the conscious decision to let activists rip down a historic statue of Edward Colston, the once-beloved mega-philanthropist who founded almshouses, hospitals, and schools across the country who has now been transformed into a hate figure for his business ties to the slave trade in the 1600s.

“For minorities of all kinds through centuries, this has been one of the greatest and freest countries of the world to live in, and that’s why so many people still want to come here… this historical revisionism is now incredibly dangerous,” he warned.

“There’s not a single statue, is there, up anywhere in this country that doesn’t relate to a time when women didn’t have votes, when we had a British empire — indeed there are lots of statues up to people because of their military prowess,” he observed.

“Who is next? Is it Oliver Cromwell because of what happened in Ireland? There is no limit to this. As soon as you begin to redraw, repaint history, you’re on a very dangerous slope.”

Farage also questioned the case for protests — all unlawful, as the anti-coronavirus regulations remain in place — given the evidence does not support allegations of racially-aggravated police brutality on any appreciable scale in the United Kingdom.

“The numbers don’t really stack up. You know, over the course of the last ten years, just over 160 people have died in police custody in this country, and only 13 of them were back,” he claimed.

“So you put that against the number of black people arrested compared to the number of white people being arrested, and actually, statistically, there’s nothing is nothin in the argument — you could even argue, in this country, you’re more likely to die in police custody if you’re white,” he added. 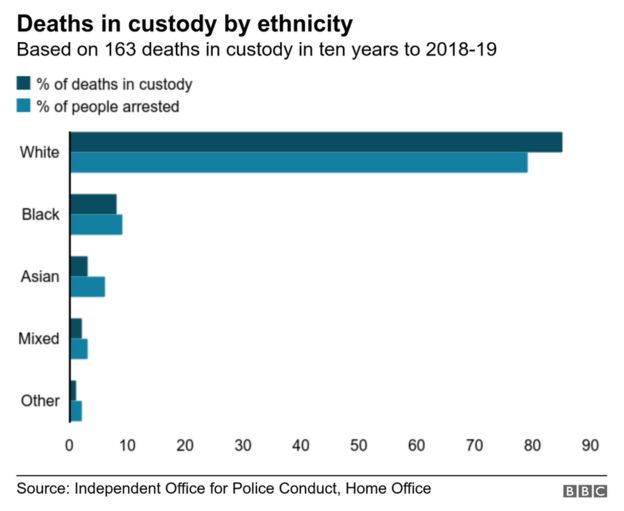