The statue of Scotland’s most famous ruler, Robert the Bruce, has been vandalised with graffiti branding him a “racist king”.

Vandals daubed “racist King” and “BLM” on the plinth of the Scots ruler’s equestrian statue, which shows him mounted upon the little war pony which carried him when he slew the English knight Sir Henry de Bohun in single combat at the Battle of Bannockburn.

They also wrote out the “BLACK LIVES MATTER” slogan in full on the ground in front of the statue, and “robert was a racist / bring down the statue” on a nearby rotunda, according to reports.

“We are disappointed to see the statue of Bruce vandalised in this way and are liaising with the National Trust for Scotland and our local heritage partners,” commented Scott Farmer, who leads the council responsible for local government in the area.

“To see such gratuitous vandalism against one of Scotland’s landmark statues is a senseless attack on a strong community and its history. This statue has no connection to the Black Lives Matter campaign and this attack could very well undermine the legitimate concerns raised by BLM.” 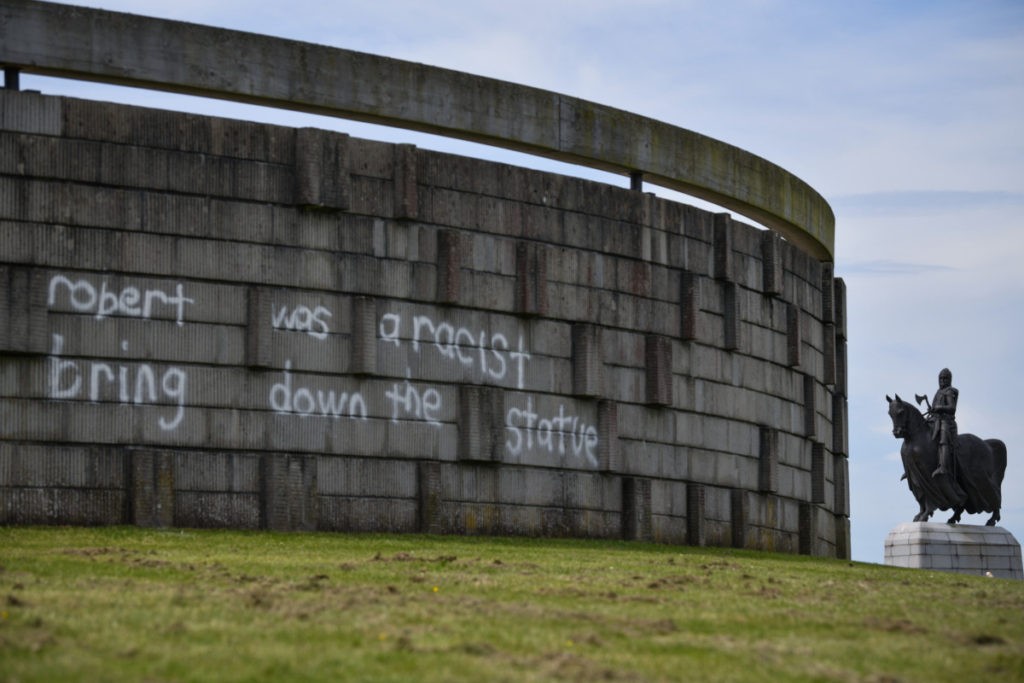 BANNOCKBURN, SCOTLAND – JUNE 12: Workers clean the Robert the Bruce Statue which has been defaced with graffiti stating “Robert was a racist bring down the statue” on June 12, 2020 in Bannockburn, Scotland. Following the removal of the Edward Colston statue during a Black Lives Matter protest in Bristol, a selection of statues across the UK have received increased scrutiny due to their links to racism and the slave trade. (Photo by Jeff J Mitchell/Getty Images)

Breitbart London is not aware of any evidence that Robert, who was born in 1274 and reigned from 1306 to 1329, harboured racist prejudices.

Certainly his rule preceded the British peoples’ period of colonial expansion — indeed, preceded the union of the British home nations — by several centuries, and any British involvement in the African slave trade. Indeed, the vast majority of Scots, including those of Robert’s noble class, would be likely to live their entire lives without encountering someone with sub-Saharan African heritage during the period.

Robert did have a long-standing desire to go on Crusade, and after his death his great friend and lieutenant James Douglas — remembered by history, somewhat ironically, as the Black Douglas — did carry his heart into battle against the Muslim Moors in Spain, although this was motivated by religious rather than racial animus, and the Moors were largely of North African and Arab heritage. 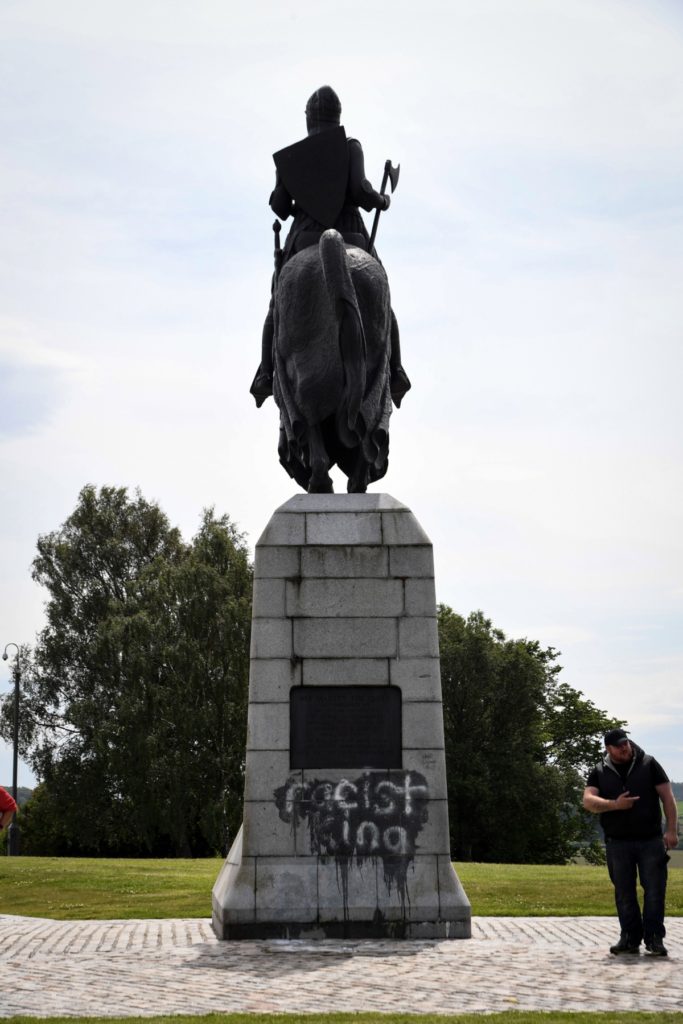 A statue of Robert The Bruce, which was defaced by Black Lives Matter graffiti, is pictured at the Battle Of Bannockburn Visitor Centre, near Stirling in Scotland on June 12, 2020. – Authorities in London boarded up memorials including a statue of British wartime leader Winston Churchill on Friday amid fears of clashes between anti-racism protesters and far-right groups. (Photo by Andy Buchanan / AFP) (Photo by ANDY BUCHANAN/AFP via Getty Images)