Britain’s Electoral Commission has rejected efforts to register Black Lives Matter as a political party on grounds that it would be “likely to mislead voters”.

“The application to register Black Lives Matter as a political party was refused by the Commission on the basis that the proposed name is likely to mislead a voter as to the effect of their vote,” said a spokesman for the controversial regulator in comments reported by MailOnline.

“As part of our considerations we examined the existing groups by the same or similar names in the UK. Having contacted a number of groups, they confirmed that the party was not associated with them,” the spokesman explained.

“Our assessment concluded that, whilst the BLM movement is a grassroots movement, it was still likely that the proposed name would mislead a voter as to the effect of their vote. This was on the basis that a reasonable voter could assume that the party represents, or is in some way associated with, these groups when that is not the case.

“If a name cannot be accepted, the associated application must be rejected. In addition, other elements of the application were rejected, including the constitution and financial scheme.”

The problems with the constitution were not enumerated, however.

The Black Lives Matter UK organisation confirmed that is was not behind the efforts to register a BLM political party to contest elections, telling the MailOnline that it had “absolutely no connection, affiliations or other and no individual or group has informed or made us aware of their intentions of forming a political party under the name of Black Lives Matter. It is not us.”

BLM UK added: “Those of all ethnicities and from all nations who believe in racial equality are anti-racists, we stand together… Some content published on [our] website may have political elements by the nature of a society and state governed under a system of democracy; however we operate in a humanitarian capacity and concern before all else.”

BLM UK is not without its own controversies, however, having been accused of antisemitism after attacking the “settler colonial pursuits” of Israeli Jews and declaring that “we loudly and clearly stand beside our Palestinian comrades” in 2020.

Brexit champion and Reform UK party leader Nigel Farage has also condemned Black Lives Matter as “a dangerous, Marxist organisation, hell-bent on anarchy” which wants to defund the police and has backing from the likes of George Soros.

The people who are behind the failed effort to register a BLM party is undisclosed, according to the MailOnline, but Sasha Johnson, a prominent BLM activist and self-styled Black Panther, has already launched her own Taking the Initiative Party, which among other things wants the state to create a Race Offenders Register in which people who express views they consider problematic would be officially listed, like sex offenders.

“A lot of racism happens at work and places of education in a micro-aggressive way. If you exhibit an element of bias at work, you should probably receive a warning first [before later being added to the register] so people know in future that you hold these views,” said Johnson, who also believe the police are “no different from the KKK“ and wants black people to receive Holocaust-style reparations. 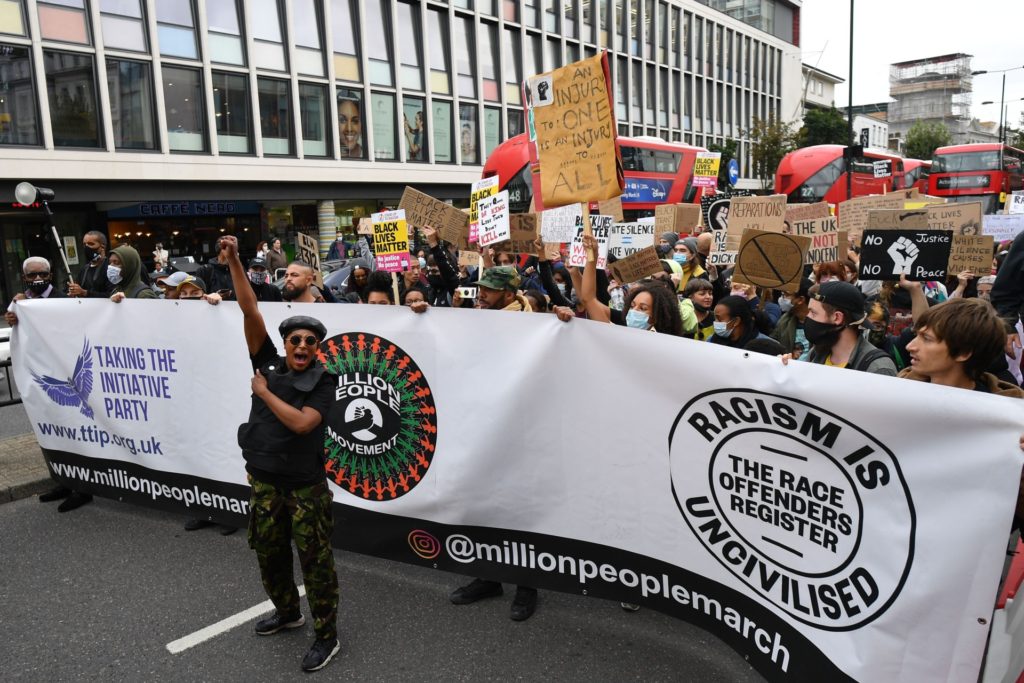 People gather in Westbourne Park to take part in the inaugural Million People March march from Notting Hill to Hyde Park in London on August 30, 2020, to put pressure on the UK Government into changing the “UK’s institutional and systemic racism”. – The march is organised by The Million People Movement, and takes place on the bank holiday weekend usually associated with the Notting Hill Carnival, this year cancelled due to the coronavirus covid-19 pandemic. (Photo by JUSTIN TALLIS / AFP) (Photo by JUSTIN TALLIS/AFP via Getty Images)