U.S. President Joe Biden and others in his administration allegedly pressured the Canadian government to shut down the ‘Freedom Convoy’ protests in February.

According to testimony in the public inquiry into Prime Minister Justin Trudeau’s use of the Emergency Act against the trucker-led protest against lockdown restrictions in February, U.S. President Joe Biden and U.S. Transport Secretary Pete Buttigieg, among others, urged the Canadian government to clamp down on the peaceful protests.

On February 14th, Mr Trudeau took the unprecedented action of using emergency powers to clear the truck blockades in downtown Ottawa, by using extreme measures such as freezing the bank accounts of protesters and ordering the forceful removal of trucks from the streets.

A live stream of the police moving in on protesters after securing Wellington and Metcalfe, shows one officer kneeing a man four times, while he is held on the ground by two other officers #cdnpoli #ottnews pic.twitter.com/aMlYqSlx0T

According to the inquiry, which was established to determine if the drastic measures were justified, the decision to implement the Emergencies Act came just three days after Trudeau spoke over the phone with President Biden, who reportedly expressed his concerns over the potential for the trucker protests to spread to the United States, highlighting possible disruptions of the Super Bowl and on the streets of Washington D.C., POLITICO reports.

For his part, Mr Trudeau complained about the alleged American impact on the Freedom Convoy, such as “money, people, and political/media support.”

The day before the Biden-Trudeau call, Canadian Finance Minister Chrystia Freeland wrote in an email to her subordinates of the sentiment among her American counterparts: “They are very, very, very worried,” she said.

“If this is not sorted out in the next 12 hours, all of their northeastern car plants will shut down.” 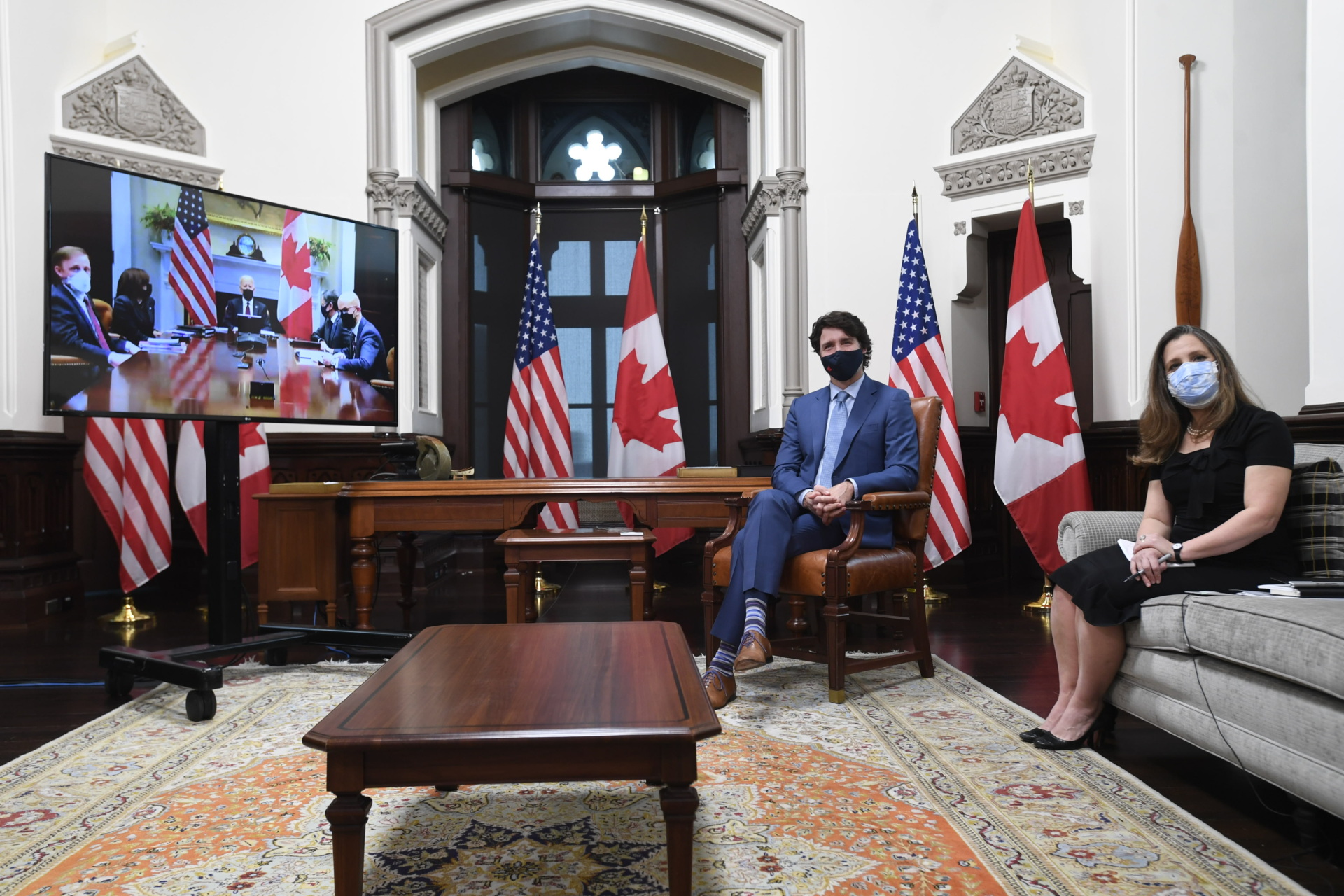 Justin Trudeau, Canada’s prime minister, and Chrystia Freeland, Canada’s deputy prime minister and minister of finance, attend a virtual meeting with U.S. President Joe Biden in Ottawa, Ontario, Canada, on Tuesday, Feb. 23rd, 2021. Biden will seek to repair relations with Canada that have been strained by disputes over trade and an oil pipeline as he meets virtually with Trudeau on Tuesday. (Photographer: Adrian Wyld/Canadian Press/Bloomberg via Getty Images)

During the public inquiry, Freeland said that the protests made her concerned that Canada was “in the process of doing long-term and possibly irreparable harm to our trading relationship with the United States,” explaining that there were many Democrats and Republicans in Congress who could use the event to introduce more protectionist trade barriers against Canada.

On Thursday, she said that the White House had also relayed concerns over Canadian protesters blocking the Ambassador Bridge which connects Canada to Detroit and serves as a key border crossing for automakers.

Canadian Transport Minister Omar Alghabra also claimed that U.S. Transportation Secretary Pete Buttigieg made the “unusual” step of calling him to question whether there was “a plan to resolve” the protests.

Appearing before the inquiry on Friday, Prime Minister Justin Trudeau defended his use of the emergency powers by invoking the potential of violence and death at the largely peaceful protests: “When there’s a national emergency and serious threats of violence to Canadians, and you have a tool that you should use, how would I explain it to the family of a police officer who was killed?

“Or a grandmother who got run over trying to stop a truck or … a protester who was killed?”

The comments were ironic, given that the public inquiry also revealed that Mr Trudeau’s own government ministers allegedly raised the idea of deploying military tanks to disperse the protest movement. 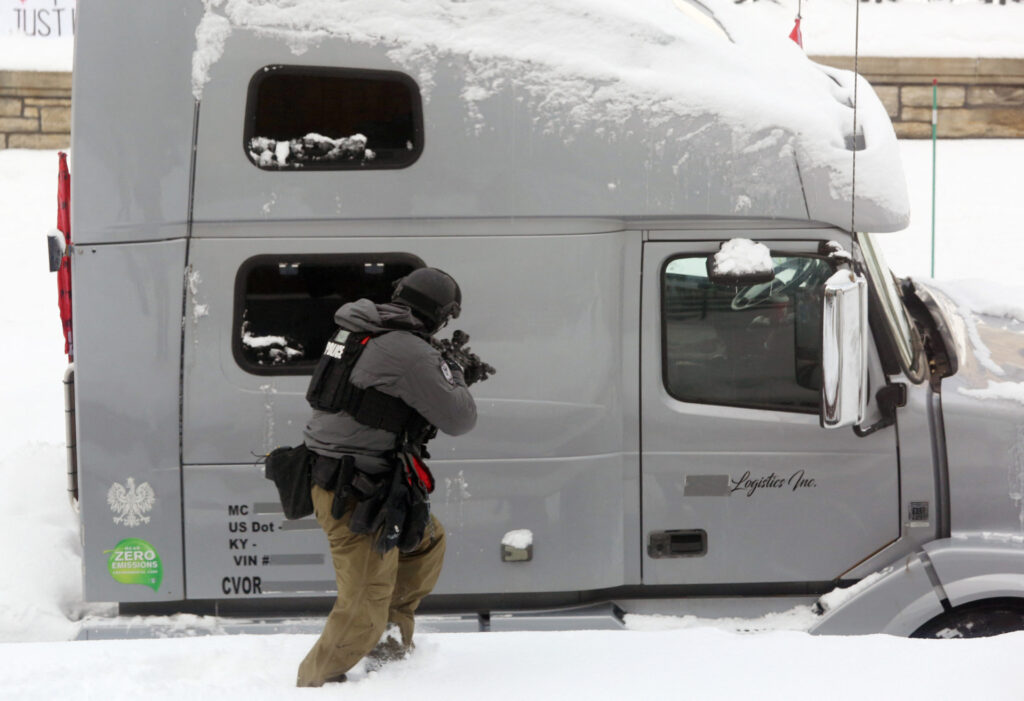 A police officer approaches a truck as they deploy to remove protesters on February 19th, 2022 in Ottawa, Canada. (Photo by DAVE CHAN/AFP via Getty Images)

Mr Trudeau went on to — somewhat confusingly — say that protests should not be used to try to “demand changes to public policy… something that I think is worrisome.”

The Liberal Party leader went on to clarify, however, that he acknowledged the role of protesting on public policy, saying that if protesters demonstrated against a decision to close down a “safe injection site” that would be a justified attempt to influence government policy.

“But there is a difference between occupations and, you know, saying we’re not going until this has changed in a way that is massively disruptive and potentially dangerous,” Trudeau said.