The military quickly mobilized troops and called up reserves, setting the stage for a potential major conflagration shortly before Israel’s upcoming elections.

The rocket destroyed a residential home in the farming community of Mishmeret, north of the city of Kfar Saba, wounding six members of a family. The Magen David Adom rescue service said it treated seven people overall, including two women who were moderately wounded. The others, including two children and an infant, had minor wounds.

The sounds of air raid sirens jolted residents of the Sharon area, northeast of Tel Aviv, from their sleep shortly after 5 a.m., sending them scurrying to bomb shelters. A strong sound of an explosion followed.

The Israeli military said militants from Gaza’s ruling Hamas movement fired the rocket from one of their launching pads in southern Gaza Strip, near Rafah. Maj. Mika Lifshitz, a military spokeswoman, said it was a self-manufactured rocket with a range of 120 kilometers (75 miles). She added that two armor and infantry brigades were being mobilized to the Gaza front and that a limited drafting of reserves was also taking place.

The family home in Mishmeret was left in ruins, with tiles, broken furniture and debris scattered about. A shattered baby’s crib lay among the rubble and two family dogs died in the explosion.

“It’s a miracle that nobody got killed,” said Assi Dvilanski, a Magen David Adom paramedic who was one of the first responders at the scene.

Netanyahu, in Washington to meet President Donald Trump, held emergency consultations with military officials back in Israel and decided to cut his visit short, cancelling a planned address to the AIPAC conference and meetings with congressional leaders.

“There has been a criminal attack on the State of Israel and we will respond forcefully,” he said. “In a few hours I will meet with President Trump. I will return to Israel immediately afterward.” 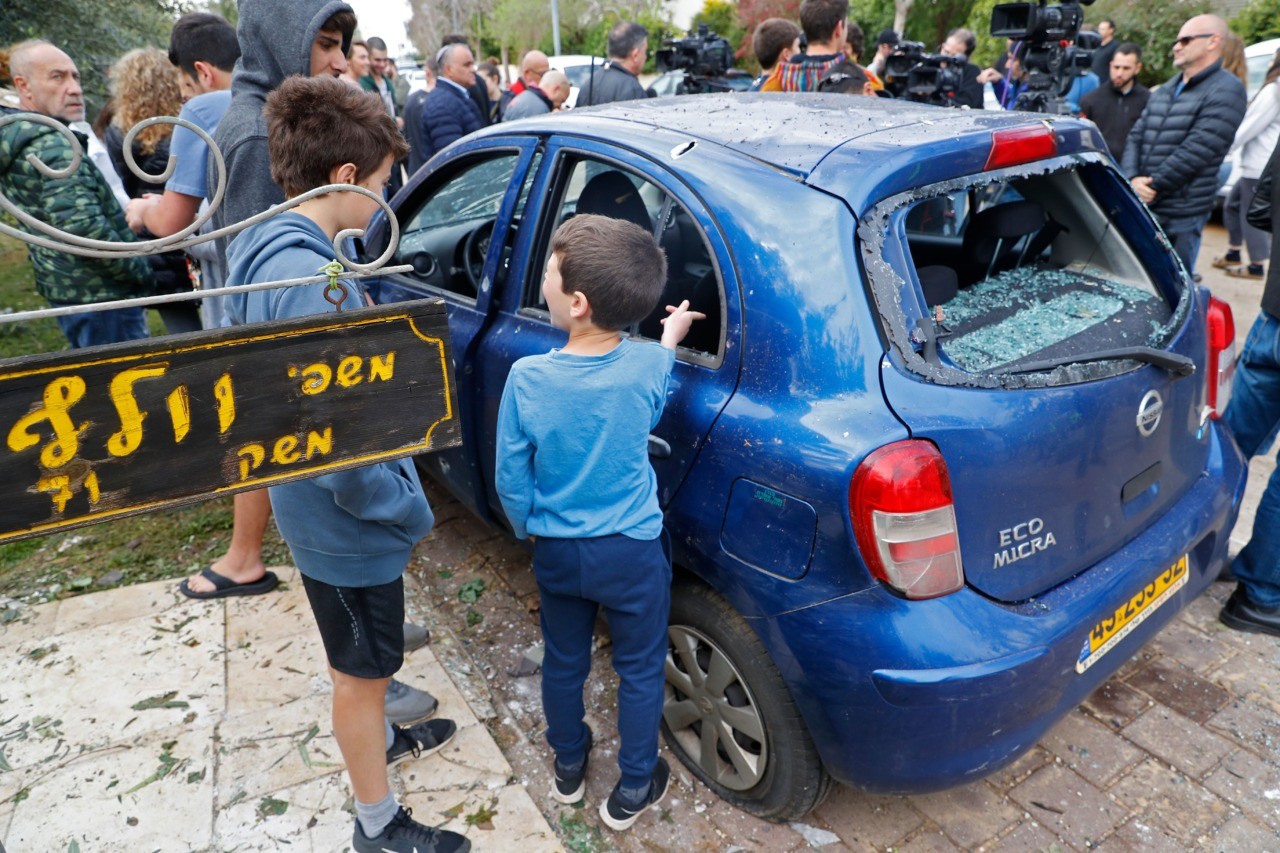 People gather around a damaged car next to a house that was damaged after it was hit by a rocket in the village of Mishmeret, north of Tel Aviv on March 25, 2019. – A rocket hit a house in a community north of Tel Aviv and caused it to catch fire on Monday, wounding five Israelis, police and medics said. (JACK GUEZ/AFP/Getty Images)

Monday’s attack came 10 days after rockets were fired from Gaza toward Israel’s densely populated commercial capital of Tel Aviv. The Israeli military at the time struck back and the sides appeared to be hurtling toward another confrontation. But Gaza’s Hamas leaders said the rocket was fired accidently and calm was quickly restored.

There was no immediate claim of responsibility for Monday’s attack, but it would seem to be much harder to dismiss the latest incident as another misfire.

A possible trigger could be a prison riot late Sunday when Hamas-affiliated prisoners stabbed an Israeli guard in the neck in southern Israel. Israeli guards moved in to subdue the rioters, wounding about a dozen prisoners, three of them seriously. In a statement, Hamas called for an end to the crackdown.

“We do not yet have a full understanding of who exactly ordered the firing of the rocket,” said Eran Lerman, a former deputy director at Israel’s National Security Council. “But clearly this is no longer something that can be explained away as a mistake or a technical failure.”

Gaza is controlled by Hamas, an Islamic militant Palestinian group that seeks Israel’s destruction and possesses a large arsenal of rockets and missiles capable of striking deep inside Israel. The territory is home to other Palestinian militant groups, including Islamic Jihad, an Iranian-backed armed organization that also has a formidable rocket arsenal. 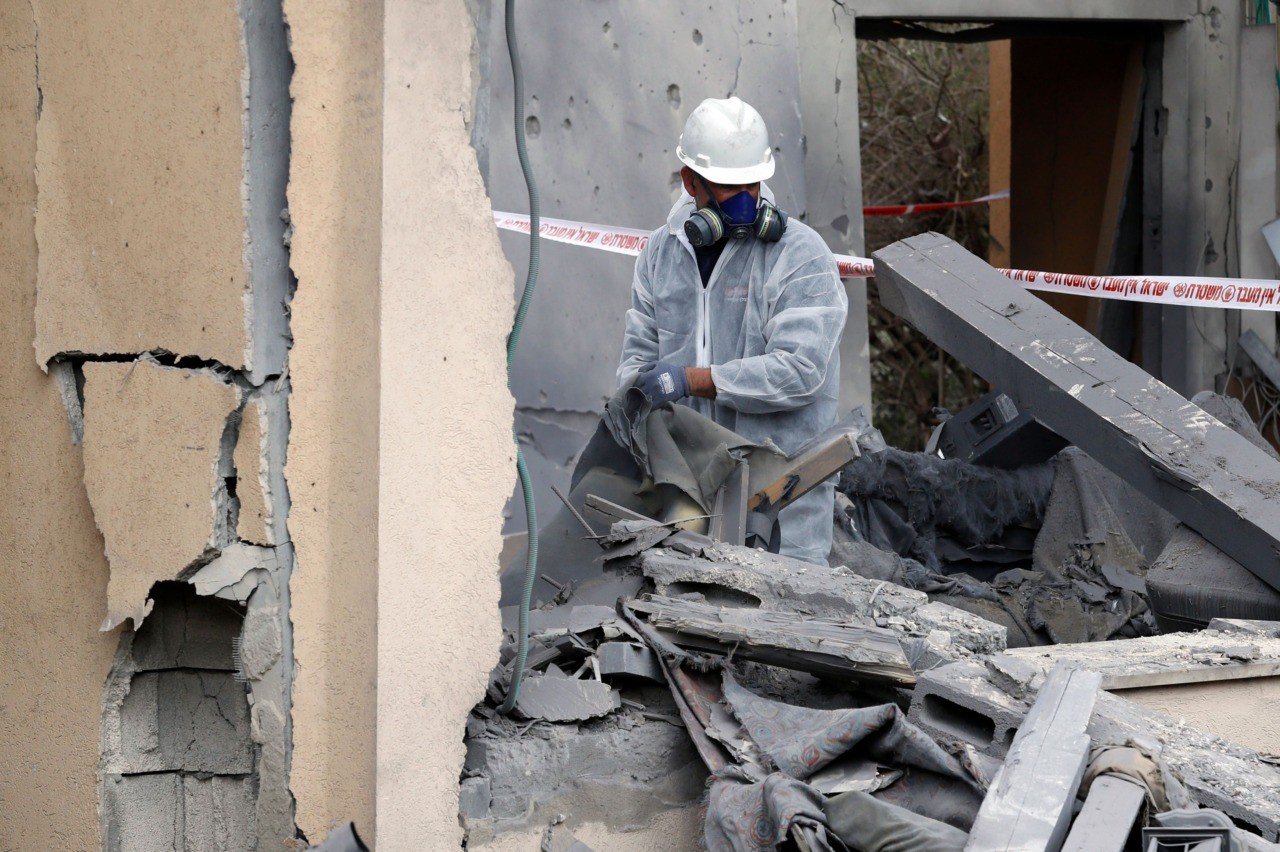 A general view shows an emergency responder inspecting a damaged house after it was hit by a rocket in the village of Mishmeret, north of Tel Aviv on March 25, 2019. – A rocket hit a house in a community north of Tel Aviv and caused it to catch fire on Monday, wounding five Israelis, police and medics said. (JACK GUEZ/AFP/Getty Images)

Israel and Hamas are bitter enemies and have fought three wars since the group seized power in the strip in 2007. Smaller flare-ups have occurred sporadically since Israel and Hamas fought their last war in 2014. Israel says it holds Hamas responsible for all fire coming out of the coastal territory.

The outburst comes at a sensitive time for both sides. Israel is holding national elections in 15 days. Netanyahu, who also served as defense minister, is locked in a tight fight for re-election and has faced heavy criticism from his opponents for what they say has been an ineffective response to Gaza militants.

“The reality in which Hamas turned Israel into a hostage is unprecedented and unfathomable,” his chief challenger, Benny Gantz, wrote on Twitter on Monday.

Netanyahu has also come under attack from his own nationalistic camp.

“Israel’s deterrence has collapsed, and it has to be said in all honesty Netanyahu has failed against Hamas,” said Education Minister Naftali Bennett, head of the Yamin HeHadash faction in Netanyahu’s coalition. “Netanyahu is a good prime minister but a failed defense minister.”

In Gaza, Hamas has come under rare public criticism for the harsh conditions in the territory. An Israel-Egyptian blockade, combined with sanctions by the rival Palestinian Authority and mismanagement by the Hamas government have fueled an economic crisis. The territory’s residents have little desire for another war with Israel. 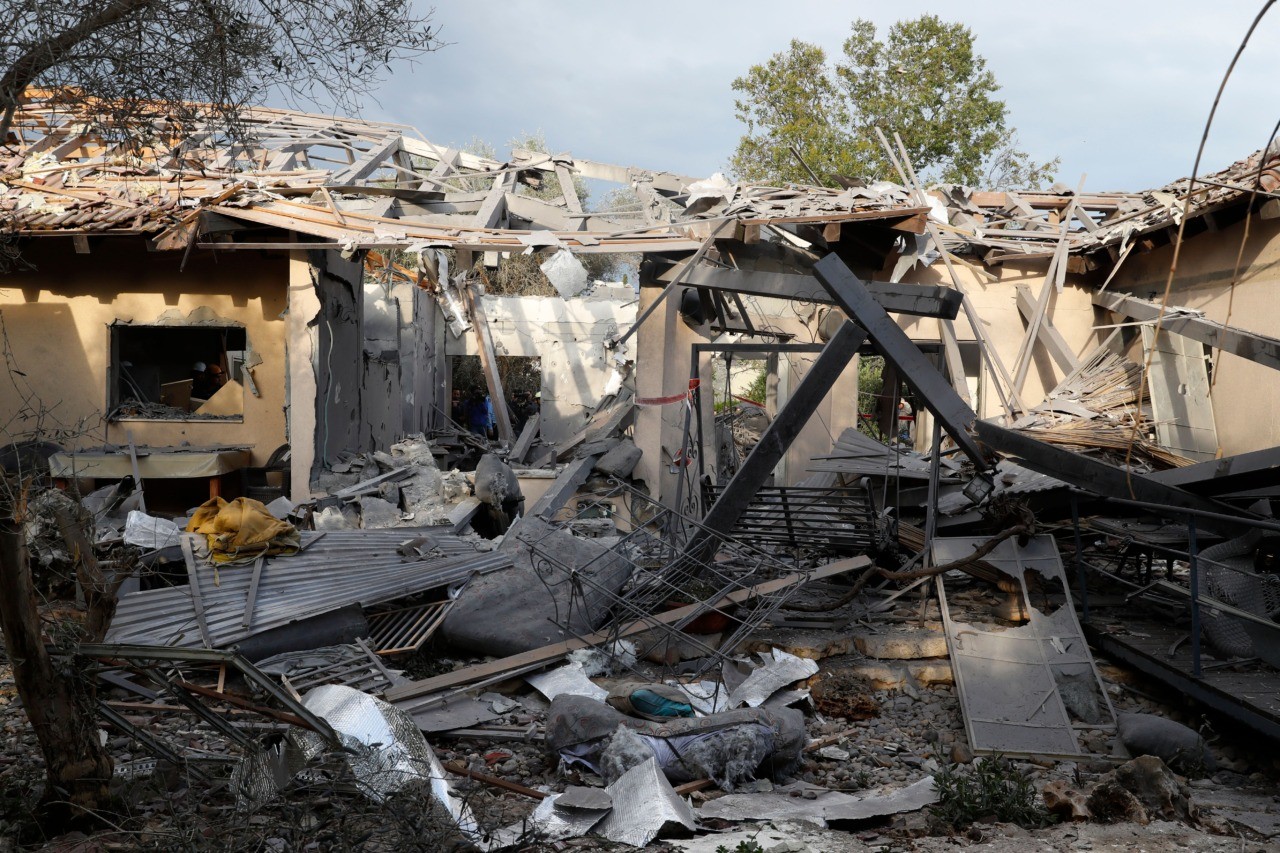 A general view shows a damaged house after it was hit by a rocket in the village of Mishmeret, north of Tel Aviv on March 25, 2019. – A rocket hit a house in a community north of Tel Aviv and caused it to catch fire on Monday, wounding five Israelis, police and medics said. (JACK GUEZ/AFP/Getty Images)

Instead of a full-fledged conflict, Hamas has tried to end the blockade through a violent weekly protest movement along the Israel-Gaza border fence that it launched a year ago. It too has largely failed. About 190 Palestinians and an Israeli soldier have been killed during the weekly rallies.

Egypt, Qatar and United Nations are trying to broker a long-term truce between Israel and Hamas but that effort has yet to bring about an agreement. At the same time, there has been an uptick in violence in the West Bank over the past week, with a stabbing and shooting attack that left two Israelis dead near a West Bank settlement and Israel’s killing of two Palestinians it said attacked troops.