Beirut (AFP) — The huge explosion at Beirut’s port last month laid bare a dockside institution riddled with graft which critics say is a microcosm of a corrupt Lebanese state.

Smuggling, customs tax evasion and widespread bribery are just a few common violations at the port, which like all public institutions is riddled with the kind of corruption that has become characteristic of Lebanon’s under-fire ruling elite.

The powerful Iran-backed Shiite Hezbollah movement has a “free pass” there because of its ties to customs and port officials, according to a former judicial official. But Hezbollah is not alone.

“The port is one of the (state’s) most corrupt institutions, both within the management and the customs service,” said Mohammad Chamseddine of the Beirut-based research and consultancy firm Information International.

After Lebanon’s 1975-1990 civil war, the port’s management was handed to a temporary public commission that was never replaced. To this day, it runs the seaport as if it were a “private business,” Chamseddine said.

As is the common practice in the multi-confessional country, Lebanon’s political parties shared out the commission’s seven seats among themselves in line with a broader power-sharing arrangement.

Direct links between the political elite and members of the commission have allowed for the port to be managed in the same corrupt way as the state.

“There is no efficient government oversight, whether on income or expenses,” Chamseddine told AFP.

“Everybody profits because the system of sharing the spoils of government also applies to the port.”

The port’s management has come under increased scrutiny after the August 4 blast, which killed more than 190 people, wounded thousands and ripped through large parts of the capital, making it the country’s deadliest peacetime disaster.

Lebanese at home and abroad were outraged when it emerged authorities had been aware for years of the huge stockpile of ammonium nitrate that blew up.

A month later, it is still unclear what started the initial blaze that set the highly explosive fertiliser alight, but an ongoing probe has led to the arrest of the head of the port commission and its customs director.

Commission chief Hassan Koraytem is linked to the Future Movement, while customs chief Badri Daher is allied with the FPM.

The powerful Shiite Hezbollah movement, designated by the US as a terrorist group, exerts sizable influence over the port to help it ship and receive its own cargos, multiple sources confirmed to AFP.

Shukri Sader, a judge who used to head the State Shura Council, a government legal body, said that it is “well known that there are goods belonging to The Resistance (Hezbollah) that pass through the port and airport”.

Hezbollah gets a “free pass” to transport goods thanks to its ties with customs officials and port employees, he added.

Hezbollah security official Wafiq Safa, who serves as a Hezbollah interlocutor to the Lebanese security forces, was sanctioned in 2019 by the US Treasury because he used this network of ties to facilitate smuggling.

“Safa has exploited Lebanon’s ports and border crossings to smuggle contraband,” including “illegal drugs and weapons,” the Treasury said at the time. 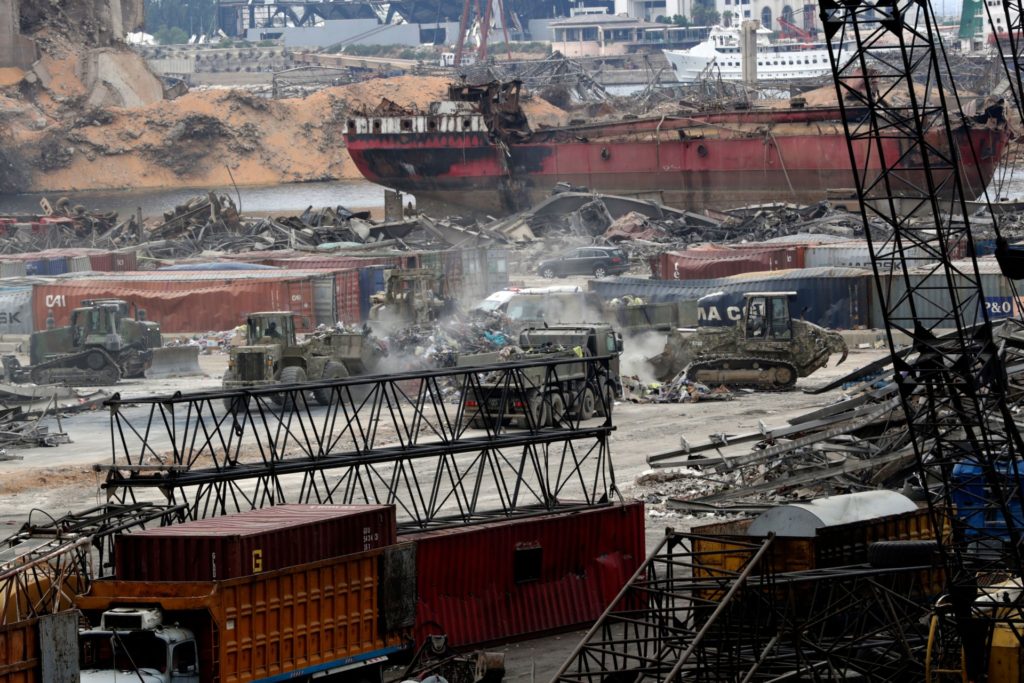 A Lebanese army earth mover prepares to pile debris into the back of a pickup truck amidst clean-up efforts near the damaged grain silos at the port of Beirut on September 1, 2020, almost a month after a monster explosion there which ravaged Lebanon’s capital. (ANWAR AMRO/AFP via Getty Images)

Hezbollah chief Hassan Nasrallah has denied his movement has any illicit involvement at the port.

But it would not be the only one.

Sader said that corruption at the dockside institution is so ubiquitous that “there is no need for evidence”.

A recent report by a state security agency, seen by AFP, names five customs inspectors it says “cannot be replaced” because of their political ties.

Each of them is either backed by the FPM, the Future Movement, the Amal Movement and Hezbollah, or Samir Geagea’s Lebanese Forces, the report said.

Built in 1894, Beirut’s port was a crucial hub for a country that relies heavily on imports, including for 85 percent of its food needs.

Up to 70 percent of Lebanon’s imports transited through the port before the explosion, but only a fraction of its revenues ever reached state coffers, Chamseddine said.

“The rest is supposed to go towards salaries and port development… but we really don’t know where it ends up,” he said.

An estimated one to two billion dollars is lost in evasion of customs duties each year in Lebanon, mostly at the port, Chamseddine added.

Had it been collected, that money could have gone toward balancing the country’s vast public debt.

Chamseddine said businessmen affiliated with parties in control at the port smuggle goods, including “through imaginary charitable associations exempted from paying customs fees”, he said.

“Everybody knows what’s going on.”

According to the security agency report, port employees at every level, as well as state security officers, regularly receive bribes to speed up shipments, slash customs fees or simply pretend they never saw them.

Allowing in counterfeit luxury goods, waving through drones without permits, ignoring a blatant hidden compartment in a container: everything has a price.

The more illicit the goods are, the more spoils the port barons have to share among themselves.

The report cited an example of a bribe worth 200,000 Lebanese pounds (around $130 at the official exchange rate), paid to officials overseeing the main entry of the port, to speed up the clearance of used imported vehicles.

Customs officials also take bribes to lower those vehicles’ valuations so as to slash duties on them, the report said. 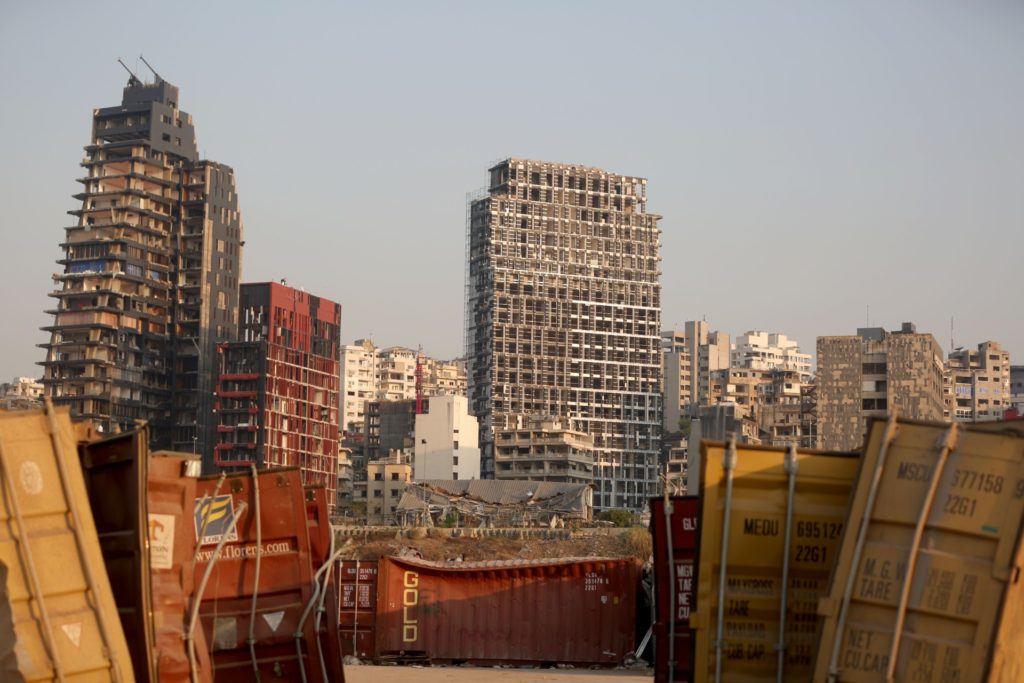 Heavily damaged buildings in the Beirut neighbourhood of Mar Mikhail overlooking the city’s port following the August 4 massive chemical explosion at the port which that caused severe damage across swathes of the Lebanese capital. (PATRICK BAZ/AFP via Getty Images)

When imported vehicles contain illicit goods like arms and drugs, officials are bribed to limit inspections to manual searches, ensuring the goods are not found, said the security report.

But for more than a year, manual searches have become the norm because the port’s only scanner is out of service.

“The scanner has been out of service since April 2019 because of a technical failure,” said a customs official, who asked not to be named because he is not authorised to speak on the issue.

The scanner “is very old and the cost of repairing it and replacing its parts exceeds its original value,” he told AFP.

It was not replaced due to political wrangling over which party would get the contract, he added.

“Customs is the most corrupt institution, and its biggest operations take place in the port,” he told AFP.

“All they care about are the Benjamins,” he said: dollars.

Smuggling, bribe-taking and selling abandoned imports in shady auctions are just a few of the violations committed by customs authorities there, he added.

In one video Kobaissi published on the Al Jadeed TV station this year, customs chief Badri Daher appears standing near containers of home supplies at the port as a crowd of men around him cast bids.

Daher strikes a deal with a man who agrees to pay half the highest bid and forget about 23 motorcycles owed to him by the customs authority from a previous auction.

But given the amount of shady dealings at the port, Kobaissi said, “this is only one simple example.”