The United States “should prioritize” providing military support to Iraqi Christian militias that have joined forces to retake their homeland in northern Iraq from the Islamic State (ISIS/ISIL), urges Rep. Jeff Fortenberry (R-NE).

Fortenberry, a member of the House Appropriations Subcommittee on State and Foreign Operations, spoke to Breitbart News on Tuesday, a day after the Chaldean Syrian Assyrian political parties, backed by their religious leaders, reached an agreement to unify their armed groups in an effort to seize and secure their homeland in Iraq, which was captured by the ISIS in 2014.

That means all Christian armed groups in Iraq have come together as an integrated force to combat ISIS. 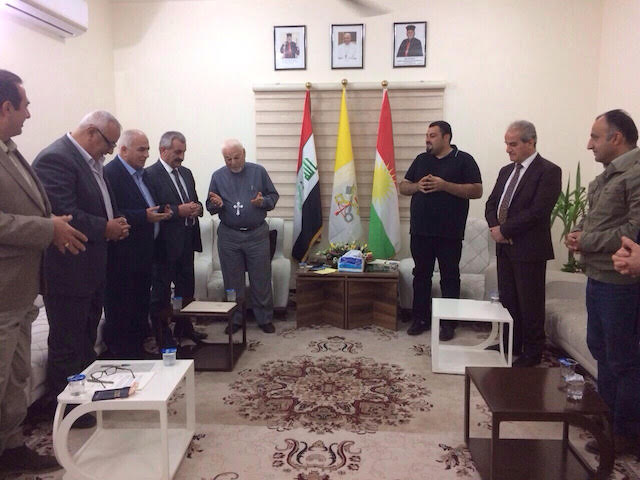 “Even if we have different views or different ideas, we all agree with the goals to save and secure our heritage and region and strengthen our faith for the next generations,” Ashur Eskrya, the president of the Assyrian Aid Society who worked along with other Iraqi Christian leaders to make the unification of the militias a reality, told Breitbart News.

“The United States should prioritize providing the integrated security forces of communities that have been victimized by [ISIS perpetrated] genocide, including Christian and Yezidi groups, with the military support they need to enable internally displaced persons and refugees to return to their homes in safety,” added Fortenberry.

The Nineveh Plains, a region outside Mosul in northern Iraq’s Nineveh province, is the historical homeland of the region’s Christian community.

Iraq’s Nineveh province was once home to the largest concentration of Christians and other ethno-religious minorities in Iraq, such as the Yazidis.

Christian political leaders and militia have praised the unprecedented pact, telling Breitbart News it is essential to ensure the ongoing existence of the Iraqi Christian community, one of the oldest in the world.

The unity statement issued by the Chaldean Syriac Assyrian parties, is a positive step towards uniting and coordinating all of our military efforts to avoid security gaps in the future.

Ultimately, we want to direct our own security efforts to protect our people in the Nineveh Plains. The indigenous people of the region no longer trust other groups, so it’s important for them to have their own role in protecting themselves. This role can be achieved through the Nineveh Plain Protection Units as an official force in the country in addition to other forces.

Rep. Fortenberry has also commended the decision by Assyrian Chaldean Syriac political parties and religious leaders to integrate all the Christian militias in Iraq.

At this time when their indigenous peoples face a number of grave challenges in the region – most pressing among them the re-securitization, repatriation, and revitalization of the Nineveh Plain – one important outcome is the decision to work to unify all Christian security forces operating in the region. It is a little known fact that Christians, Yezidis, and other minorities are fighting for their homeland.

In large part due to efforts by Rep. Fortenberry, the United States has officially acknowledged that Christians, along other minorities in Iraq, have been victims of genocide at the hands of ISIS.

Earlier this year, the congressman introduced a bipartisan resolution to officially recognize the ISIS atrocities against Christians and other minority group as “genocide.” The resolution was overwhelmingly approved by the House of Representatives.

“This legislative maneuver was critical to further policy considerations that will end the horror of ISIS, provide justice for the minorities, and restore pluralism to a fragile Middle East,” Fortenberry told Breitbart News.

“As a next step, in September I introduced another resolution in Congress that follows on the government of Iraq’s own initiative to create a province in the Nineveh Plain region, with the goal of restoring the ancestral homeland of so many suffering peoples. The European Parliament last week passed a similar resolution,” he added.

On Monday, various political leaders of the Assyrian Chaldean Syriac signed a joint statement announcing the integration of the various Christian militias in Iraq.

“The signing of the joint statement is a very important first step to establishing the future of Nineveh Plain and opens the doors for the indigenous people to protect themselves without influence of others,” Eskrya told Breitbart News.

Emmanuel Khoshaba Youkhanna, one of the Christian leaders who signed the statement, explained, “This is the first step to unify all our forces under one leadership.”

Youkhanna, who also serves as the commander of the independent Christian militia known as Dwekh Nawsha (“self-sacrifice”), noted that the unified Christian force is seeking official recognition from the U.S.-backed, Shiite-led Iraqi government in Baghdad, emphasizing, “We don’t want to be an outlaw militia.”