In the coming days and months our unbiased, objective mainstream media is going to ensure you know all about Josh Duggar, a 27 year-old reality star who just resigned from the Family Research Council after allegations surfaced that, as a teenager, he molested underage girls, including his own sisters. The reason you’re going to know everything about this pig is because he is a Christian, a conservative, and has associated with the Republican Party, including a number of 2016 presidential candidates.

You are going to hear so much about Josh Duggar because the story benefits Democrats, especially Hillary Clinton.

Yep, all weekend long, the media will be dusting off and studying the Todd Akin Playbook.

How good do Democrats have it? This good…

You will almost certainly never learn anything from our media about Bill Clinton’s pedophile pal, a billionaire scumbag Democrat named Jeffrey Epstein who, in 2008, pleaded guilty to soliciting an underage prostitute. He appears to have gotten off pretty easy:

In 2005, police in Palm Beach, Florida began investigating Epstein for trafficking in high school-aged girls. Epstein hired a dream team of lawyers who successfully fought all charges except for one count of soliciting prostitution. He was sentenced to 18 months in prison, of which he only served 13 months.

More from The Smoking Gun:

But the secretive Epstein–who paid scores of underage girls to give him naked massages in his Palm Beach mansion while he masturbated and poked at them with a vibrator–somehow remains welcome in society, academic, and philanthropic circles.

“I remember asking Jeffrey, ‘What’s Bill Clinton doing here?’” Roberts said in 2011. The former president, she added, was accompanied by four young girls during his stay — two of whom were among Epstein’s regular sex partners. “And [Jeffrey] laughed it off and said, ‘Well, he owes me a favor.’ He never told me what favors they were.”

A civil suit between Epstein and Brad Edwards, a lawyer representing women who allege they were Epstein’s victims, resulted in flight logs that confirm the two did indeed travel together, and on “numerous occasions.” 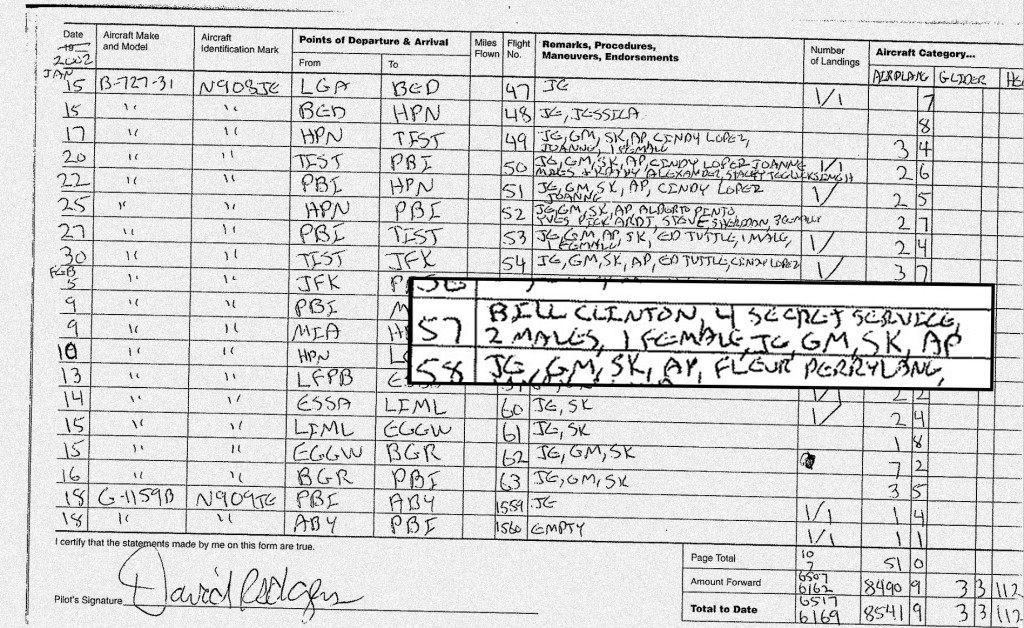 The Daily Caller reports that when asked about his friendship with Clinton, Epstein pleaded the Fifth Amendment to protect the man who might be America’s very first First Gentleman:

Court documents (p. 34) reviewed by The Daily Caller reveal that Epstein took the Fifth to avoid self-incrimination in a deposition when directly asked, “Do you know former President Clinton personally?” Epstein made the plea in a 2010-2011 civil case between Epstein and Florida lawyer Brad Edwards, who sued Epstein on behalf of some of Epstein’s alleged victims. …

The reasons for Clinton’s potential testimony, according to the undisputed facts, included:

“(a) Clinton was friends with Ghislaine Maxwell who was Epstein’s longtime companion and helped to run Epstein’s companies, kept images of naked underage children on her computer, helped to recruit underage children for Epstein, engaged in lesbian sex with underage females that she procured for Epstein, and photographed underage females in sexually explicit poses and kept child pornography on her computer;”

“(b) it was national news when Clinton traveled with Epstein aboard Epstein’s private plane to Africa and the news articles classified Clinton as Epstein’s friend. (c) the complaint filed on behalf of Jane Doe No. 102 stated generally that she was required by Epstein to be sexually exploited by not only Epstein but also Epstein’s “adult male peers, including royalty, politicians, academicians, businessmen, andlor other professional and personal acquaintances” — categories Clinton and acquaintances of Clinton fall into. The flight logs showed Clinton traveling on Epstein’s plane on numerous occasions between 2002 and 2005.”

“Epstein’s personal phone directory from his computer contains e-mail addresses for Clinton along with 21 phone numbers for him, including those for his assistant [Doug Band], his schedulers, and what appear to be Clinton’s personal numbers[.]

Naturally, after Epstein’s trouble with the law began in 2005, Clinton said he distanced himself from the pedophile.

Naturally, that wasn’t at all true:

Thanks to our unbiased, objective media, in just a few short hours the American people already know more about Josh Duggar and the GOP than they do Jeffrey Epstein’s much more personal relationship with Bill Clinton.