A “terrorist troll” arrested today by the FBI, with whom I once had fleeting but unproductive contact, posed as a feminist with a parody identity called Tanya Cohen with which he posted a column at feminist blog Feministing.com that outed game developer Brianna Wu as transgender.

Joshua Goldberg has been called a “white supremacist” troll by the media today, and as a “GamerGate supporter” by Wu, but it would be more accurate to describe him as simply chaotic. Wu, together with other critics of Breitbart’s Shaun King reporting, desperate to unpick holes in our story, attempted to suggest that Goldberg was our source in an exclusive story about King’s ethnicity. They were wrong.

But, even worse, they purposefully omitted to mention that Brianna Wu herself was a victim of the same troll, even going so far as to follow him on Twitter and ask him to DM her. In other words, Wu had private communication with a man arrested by the FBI today for terrorism. She then tried to use him to attack her opponents. 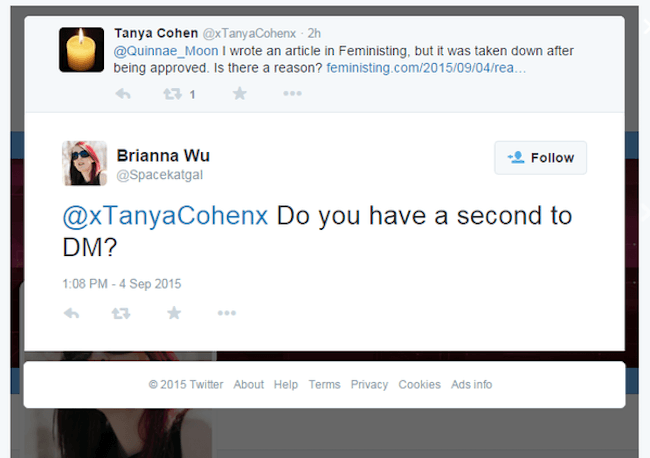 Goldberg, writing as Tanya Cohen, outed Wu in a column since removed from Feministing.com’s website, which you can still read here. The Cohen parody identity was almost comically obvious, but Feministing editors did not pick up on the joke. Wu explained the communication as follows:

For the people asking: My communication with that person was to tell them their work was not up to professional standards of sourcing.

To be clear: I privately contacted a writer to tell them their sourcing was unacceptable, and to hold themselves to higher standards.

If anything, this speaks to my professional credit. I saw someone writing something that was unethical – stepped in to privately correct it.

Progressive campaigners today wrongly accused Breitbart of giving a platform to a terrorist troll. It was in fact they who did – and one of their own got burned as a result.

A moderator on GamerGhazi, a ferociously pro-feminist subreddit, noted that the Feministing.com post “violat[ed] rules on outing.”

Brianna Wu has been known to be trangender for some time, but has not acknowledged her past herself. Her outing at the hands of an apparent ally – a feminist blog – will be acutely embarrassing for the blog, in particular its executive director Jos Truitt. Truitt did not respond to a request for comment.

Joshua Goldberg legitimized one sockpuppet (@xTanyaCohenx) by making it argue with another sockpuppet (@MoonMetropolis). #theplotthickens

Joshua Goldberg had Twitter arguments with himself. For that alone, he should get a life sentence. https://t.co/n4FsVBgFVd

It's absolutely good that Joshua Goldberg will spend time behind bars. Keep an eye out for anyone who uses him to demonize their opponents.