Newly-revealed evidence shows that a political team headed up by Stu Spencer, now a top adviser to Gov. John Kasich’s presidential campaign, was trying to draft former President Gerald Ford to challenge Ronald Reagan for the GOP nomination for President.

Breitbart News has obtained a photograph of an original document from 1980 that has never been made public. It is a form issued by the Ohio Secretary of State’s office, and was apparently signed by former President Ford on March 13, 1980. The form was witnessed by former top aide Robert Barrett and future Reagan acting press secretary Larry Speakes, and it declares Ford’s intention to run as a candidate for President in the 1980 Ohio GOP primary.

A source says the document was one of two dozen copies of the same form he personally obtained from the offices of the Ohio Secretary of State in March 1980, transported to Washington, D.C. and gave, unsigned, to a Ford operative. He then received the form, apparently signed by Ford, half an hour later and has kept it unknown to the public for 36 years.

Titled “Consent for Use of Name as First Choice for the Presidency,” it contains the following subtitle “(Several Candidates) Revised Code Sec. 3513.12.” At the very top left in small print it is labeled “Form No. 2-M. Prescribed by the Secretary of State. (11-75).”

The photograph of the original document, provided by our source, is included below. 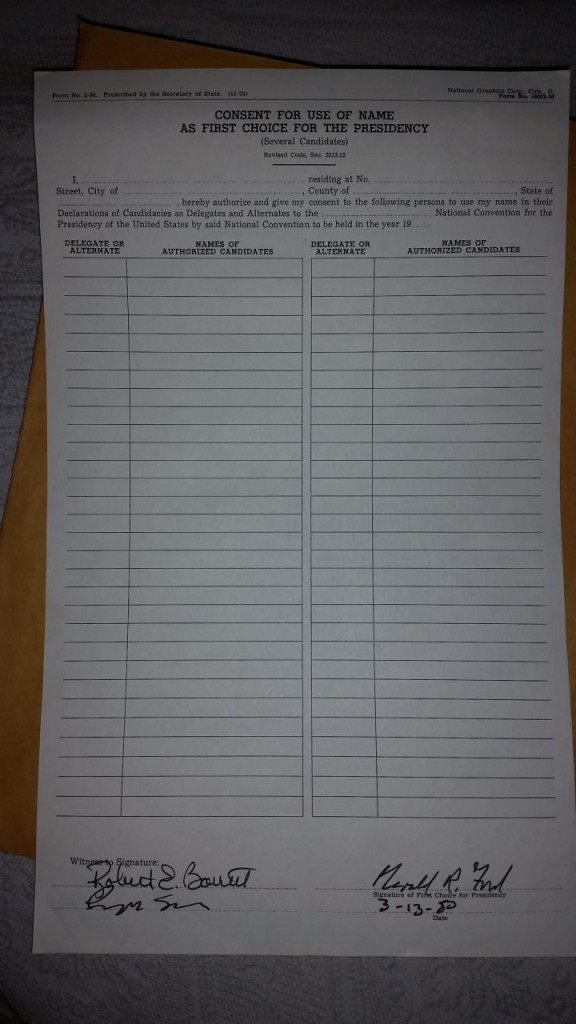 Our source has also provided a photograph of another document, dated March 10, 1980, which shows the first page of the state-by-state delegate calculus he put together during his brief employment by the “Draft Ford” effort he says was led by Spencer.

That photograph of the document, which references the delegate status of 10 states, is included below: 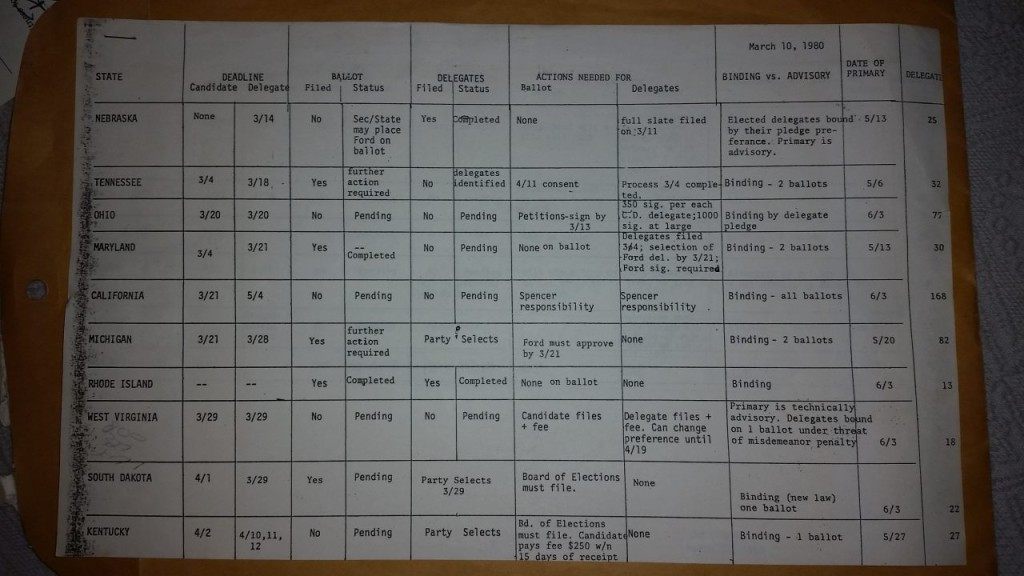 “We had placed him [former President Ford] on the ballot with his knowledge in every state we could without his signature. He actually got in before he got out,” our source says of Ford’s potential 1980 candidacy.

Note that the document would support this statement, as it shows the “Draft Ford” effort had placed Ford’s name on the ballot in Tennessee, Maryland, Michigan, Rhode Island, and South Dakota, or six out of the ten states on the page.

In Ohio, the ballot status listed on the spreadsheet says “Petitions-sign by 3-13” under “Actions Needed for Ballot.” The date of the primary is listed as 6/3.

“My role was to find out about the deadlines [for filing to run by state], and report back,” our source says.

The new documents would indicate that Ford, encouraged by current Kasich operative Spencer, may have been closer to announcing his candidacy than was previously known.

The man working to stop Reagan in 1980 is now using his behind-the-scenes political skills to “Stop Trump” through the Kasich campaign.

“This is not the first time the Empire has tried to strike back,” our source says of the current efforts to “Stop Trump.”

For his part, former President Ford wanted no evidence of his plan to challenge Reagan in 1980 to survive.

“You have to make sure if we don’t do this, these documents don’t ever see the light of day,” Ford said to another person at the time, according to our source.

The race for the GOP nomination in March 1980 was still undecided. Reagan and George H.W. Bush were competing vigorously, and Sen. Howard Baker had just dropped out.

The establishment was concerned that Reagan would win the nomination, but lose the general election, as polls at the time showed Jimmy Carter with a 15-point lead.

As Shirley wrote in Rendezvous With Destiny:

Although Bush was drawing big crowds in Florida, the volatility of the GOP contest fueled speculation that former President Ford might–or should–get in the race. Campaign Maestro Stu Spencer made several probing calls around the country to Republicans, taking soundings as to how they felt about Ford jumping in… He complained privately that Reagan was too conservative to be president…

[On March 7, 1980] Ford went down to Eckerd College in Florida to give a speech…Spencer coyly told reporters “I think you can look for a news story next week.” …

If Ford was going to take the plunge, he would have to do so quickly. Filing deadlines were looming in many states…

Ford aides began drawing up a campaign plan. In early March, a group led by Thomas Reed, Ford’s former secretary of the air force, and Leonard Firestone, Ford’s wealthy next door neighbor in California, formally created the Draft Ford Committee. Reed, like Spencer, had once worked for Reagan. A young former White House aide, Larry Speakes, was recruited as the committee’s spokesman.

“Also, Bob Teeter was meeting with Ford and the Draft Ford committee even though he was already working for Bush for President!” author Shirley tells Breitbart News.

Shirley’s account corroborates our source’s story, who says he waited in the lobby of a Washington, D.C. hotel on March 13 where Ford later that night delivered a speech to a fundraiser for GOP House members and senators.

“The guy I reported to reported directly to Thomas Reed,” our source says.

“You knew that Spencer was involved. I just personally did not have direct contact with him,” our source adds.

“It was very compartmentalized,” our source notes.

The spreadsheet confirms the importance of March 13. “Last date intent of candidacy must be signed” it read. The forms did not have to be filed with the Secretary of State in Ohio until March 20.

Spencer had worked for Reagan from the beginning, starting in the 1966 California Governor’s race. He had been on the outs with Reagan for several years at the time of the “Draft Ford” effort, but would, later in 1980, go back to work for him, and would be on Reagan’s team through much of his administration.

Twenty eight years later, when he “was interviewed for the Gerald R. Ford Oral History Project on December 2 and 3, 2008 by Richard Norton Smith,” Spencer tells a somewhat revisionist story of the degree to which he was involved in the “Draft Ford” effort:

Spencer: There was always, by people you might call Ford people, whether he ran or not in 1980 – there was always talk and speculation that he might go seek it. He never really tipped his hand during all these things. Then you get down to, it’s the fall of 1979, I think it’s the early fall, and a lot of his friends in the east are calling him and encouraging him, some asking him, but a lot encouraging him. There was still this animosity toward Reagan, this belief that Reagan wasn’t a heavyweight – that Reagan couldn’t do it. This still persisted in the eastern establishment types. So he was getting those phone calls, people coming out and sitting here and talking to him and telling him, and I had a conversation with him early in that period. What I basically said, there are periods of opportunity, you’ve passed two of them – to get him prepared to do this. So you’ve got to make a decision. I don’t think he’d made a decision yet, otherwise our openings – things that have to get accomplished at this point in time, at this point in time and this point in time.

Spencer: Organizationally, although the whole thing. And Reagan was doing them all. I told him the window of opportunity was going to close, without saying do it or don’t do it. It was, “Hey, these are the facts, Mister.” He listened as I went through all this. So he called a meeting. Held it in his conference room over here, of which, you’ve probably got the list somewhere, I don’t know if you’ve got it.

The eastern crowd was here, Bailey was here, Deardourff was here, I think Jack was here, Marsh and Teeter and Cheney was here, I was here, I think Phil Buchen might have been here. People like that. These in the group really wanted him to run. I mean, they have him a pitch to run. Cheney shared my thoughts at the time. I put a damper in the meeting, I’m sure. I just said, “Hey, we missed too many opportunities to do it.” I was still the only one who said, “Hey, Ronald Reagan’s one tough candidate. He’s one of the best, you’re not running against a patsy. He basically today owns the party. To me, guys, this is not a realistic decision. It could be a suicide mission.” But I said, “It’s his decision to make.” He listens, he always listened and listened and listened and kept his own counsel, but I definitely left the meeting and Cheney and I had stayed overnight at the Racquet Club and then came over here and then he was flying out, I was driving back to Newport.

We left the meeting, we were convinced he wasn’t going to do it. I think it was two days later, 48 hours later, I get a phone call. “We’re going to have another meeting to talk about the presidency.” Barrett calls me. I said, “You’re nuts.” He says, “Yeah, he’s got another meeting. We can’t find Dick. Can you get him?” I says, “I’ll get him.” So I called Dick and he said, “I ain’t coming to another meeting. They know my position.” He was right. “I’m not flying back out there for another meeting.” He was not a Reagan guy at all, he never thought very highly of Reagan, Mr. Cheney didn’t. The second meeting was held. I don’t know what transpired, but I think Betty got in the act. I could smell it. By the time he went home and Betty said, “I ain’t going to do it.” It was pretty much pronouncement at that second meeting that, “I’m not going to do it.”

Smith: She had just come off the intervention, and had a whole new life out here.

Spencer: Oh, yeah. Whole new world. I don’t know what she said to him – she said something and that was the end of that game.

Spencer: No. It only would have made sense if on January 1, ’77, he would have said, “I think I’m going to do it,” and gone out there and started working his butt off. Then it might have worked. But no, he wanted to make the money – you couldn’t have them both.

On March 16, 1980, Ford publicly announced he would not be running for the 1980 GOP nomination, saying “America needs a new President. I have determined that I can best help that cause by not being a candidate for President, which might further divide my party.”

Shortly after that announcement, our source was summoned to the office of his superior to witness the destruction of all two dozen copies of the Ohio Secretary of State form, all signed by Ford.

All but two of the identical documents were shredded.

With a grin and a wink, our source’s superior handed one of the two documents to our source, keeping the other.

“Hold on to that,” he told our source. “Someday that may pay for your kid’s college.”

Our source provided a copy of the document to Breitbart News free of charge.

The Kasich campaign “is a client of Shirley & Banister though I am not personally involved,” author Shirley tells Breitbart News.