In a 30-second ad, Diamond and Silk declare that “Nehlen puts the American workers first,” whereas “Lyin’ Ryan cripples the American people and the middle class by shipping our jobs overseas– jobs like GM, Chrysler and Oscar Mayer Weiner.”

“We want to elect a businessman, Paul Nehlen, who worked in manufacturing and earned his MBA,” the duo say. “Vote for Paul Nehlen August 9th. Remember this is an open primary so Democrats, you can vote too.”

Since Paul Ryan took office in 1999, Wisconsin has lost one-fifth of its total manufacturing jobs.

As the elected representative of Wisconsin’s first Congressional District, Ryan has presided over the shuttering of factories that had previously been fixtures of the community for decades–a fact that the Nehlen campaign has highlighted. 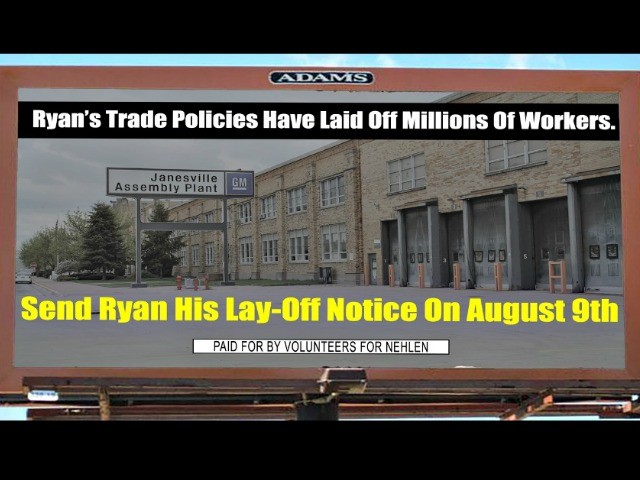 The GM plant, mentioned by Diamond and Silk, had been a part of Janesville’s community for nearly a century. At the time of its closing, the Janesville facility was the oldest GM plant in the nation. Opened in 1919, the plant once employed more than 7,000 Wisconsin workers.

Yet “between 1998 and 2007, auto manufacturers and suppliers cut more than 7,400 jobs in the state,” according to the Milwaukee Journal Sentinel.

Then in 2008, Janesville saw 5,000 jobs at GM and other auto-related companies disappear from the community, the Journal Sentinel reports.

In 2009, the Chrysler plant in Kenosha closed its doors, as well—reportedly sending the jobs of 850 Wisconsin workers to Mexico. The move represented the “end of more than a century of auto production in Kenosha, where Ramblers first came off the line in 1902,” the Milwaukee Journal Sentinel wrote.

Last November, Oscar Mayer announced that it was shutting down its headquarters in Madison, “wiping out hundreds of jobs at a company that has been a part of the community’s fabric since 1919,” the Associated Press wrote.

Yet Paul Ryan has been one of Congress’ leading champions for globalist trade policies that impact American jobs and American workers.

Last year, Ryan served as President Obama’s “partner” in his effort to fast track the Trans-Pacific Partnership—even though Wisconsin suffered a net loss of nearly 40,000 jobs in 2015 alone due to the U.S. trade deficit with TPP countries, according to the Economic Policy Institute.

Soon after arriving in Washington, Ryan voted to give China permanent normal trade relations status with the U.S.

In 2010, Ryan voted against a proposal to crack down on Chinese currency cheating, even though he has admitted that China manipulates its currency.

In 2015, Ryan pushed to fast track the Trans-Pacific Partnership even as President Obama was indicating that China could eventually join the TPP.

Now that he is facing a heated primary challenge, Ryan has sought to distance himself from his record of pushing to fast track TPP–even though, as CNN has noted, Ryan’s work to fast track TPP represents a critical part of Ryan and Obama’s shared “legacy.”

Nehlen has argued that Ryan “owns” TPP because he was Congress’s greatest champion for fast tracking the deal. Fast track eliminates the ability for senators and congressmen to offer any amendments to the deal, eliminates the Senate filibuster, kills the ability for a treaty vote, and authorizes the President to finalize and sign the agreement. As a result, no deal placed on a fast track has ever been blocked.