An iconic American company, McDonald’s, has quietly outsourced the jobs of 70 white-collar professionals in Ohio to foreign H-1B workers.

The H-1B outsourcing in the nation’s heartland showcases the growing corporate use of foreign H-1B workers to replace American white-collar professionals, and it comes after companies have used waves of legal and illegal migrants to slash blue-collar jobs and wages in Ohio and around the country.

Also, the 70 Ohio jobs that McDonalds outsourced to lower wage foreign graduates are not Silicon Valley technology and software jobs — they’re white-collar accounting jobs performed by graduates from mainstream business schools. That outsourcing of mainstream business jobs spotlights the growing movement of foreign workers into all corners of the nation’s white-collar professional economy.

White-collar outsourcing “is not just a Silicon Valley thing anymore, it is happening all over” the country, said Steve Camarota, head of research at the Center for Immigration Studies.

The outsourcing in Columbus, Ohio, was explained as a cost saving effort by a McDonald’s spokeswoman. “To deliver $500 million in savings, the vast majority by the end of 2017, we are restructuring many aspects of our business, including an accounting function,” said spokeswoman Terri Hickey.

The outside contractor is Genpact, a New York-based firm that outsources work to Indians who are allowed to work in the United States for several years once they get an H-1B visa. The company is a spinoff from General Electric, and its biggest owner is Bain Capital. “Thank you for your inquiry but we are unable to comment on details of our client engagements due to confidentiality,” Gail Marold, the Genpact spokeswoman, told Breitbart News. A map of Genpact’s H-1B outsourcing contracts can be found here.

The outsourcing deal was revealed when McDonalds sought federal taxpayers’ funds to compensate the 70 fired Americans.

The outsourcing news comes as Donald Trump campaigns on the popular promise to reform the H-1B and immigration programs and while Hillary Clinton is promising to expand companies’ hiring of foreign blue-collar and white-collar workers.

Over the last 20 years, many Americans companies have outsourced their computer and software departments, often to Indian firms such as Tata Consulting. The foreign companies use the H-1B guest worker program to bring their lower wage foreign graduates to work in American office parks. That expanding trend has been extensively documented by specialist publications, such as ComputerWorld, and there’s little or no evidence the H-1B workers create patents, raise productivity or generate additional jobs.

American companies are now trying to outsource more varieties of jobs, including accounting, healthcare and design jobs. For example, American universities have hired H-1Bs for 100,000 prestigious jobs, including professors, lecturers, doctors, therapists, scientists and researchers. Engineering giant Caterpillar continues to hire H-1B workers in Illinois as it fires hundreds of American engineers and other white-collar workers, DeLoitte and other U.S. accounting firms have asked for more than 20,000 H-1B visas to replace American business-school graduates. 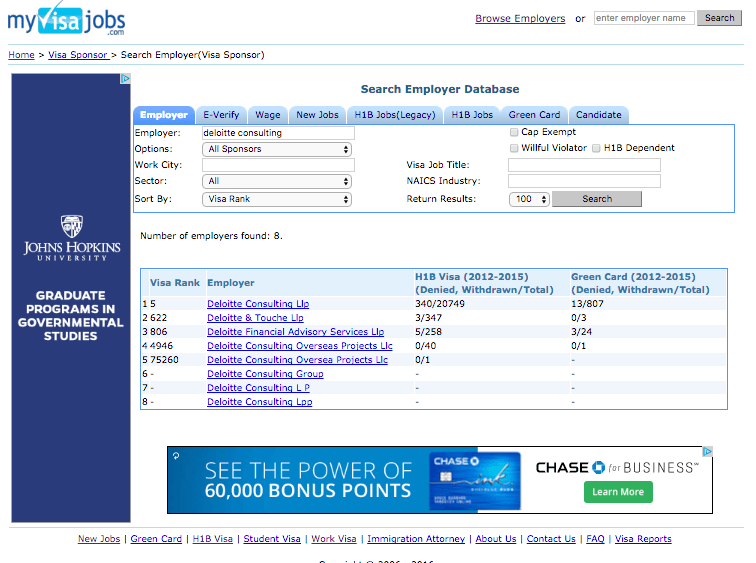 That growth and expansion is repeating the pattern among blue-collar workers, where millions of American farm-workers, meat-packers, janitors, hotel workers, groundskeepers, and restaurant workers have been gradually replaced by millions of legal or illegal, temporary or permanent, foreign workers since the 1980s. That blue-collar outsourcing began in the farm fields of Texas and California, and then expanded to Wisconsin dairies, Milwaukee bakeries, Nebraska slaughterhouses, Oregon apple orchards, New York supermarkets, and all of the nation’s major cities. During the same period, blue-collar wages stalled and the resulting rise in profits exploded stock values.

Ohio, for example, is now home to roughly 13,000 H-1Bs, of which roughly 4,000 are employed at universities which can get an unlimited number of “cap exempt” H-1B visas.

The H-1Bs are being sought to work in Ohio as designers and business forecasters at Abercrombie & Fitch, credit analysts at JP Morgan, accountants at Accenture, scientists at Abbott Laboratories, researchers at Ohio State University, and also as therapists, software programmers and business analysts at many other firms. 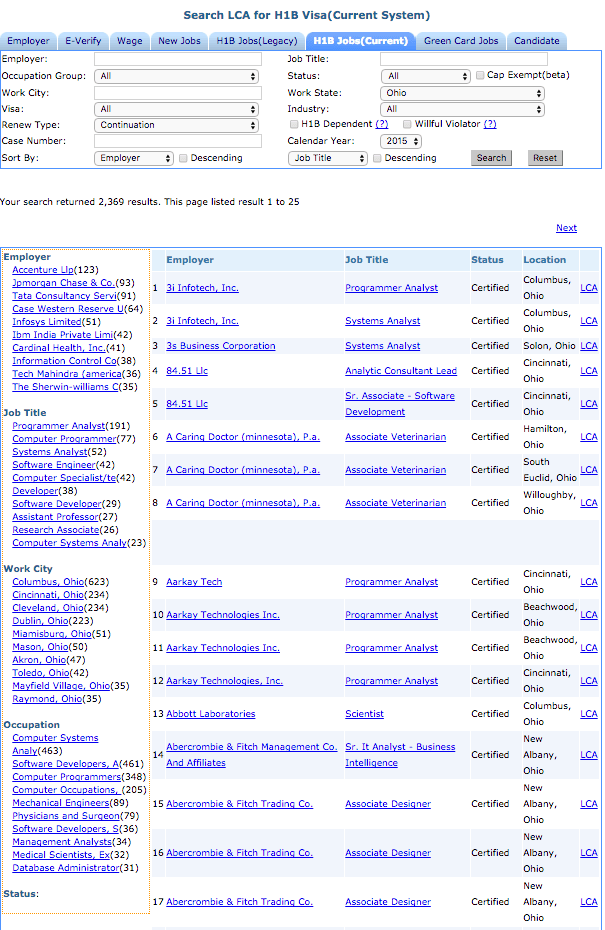 Nationwide, roughly 650,000 H-1Bs are working for companies in the United States, alongside many other hundreds of thousands of guest workers with L-1, B-1 and other white collar visas.

In Ohio, roughly 1,200 foreign post-graduate students are working in prestigious white-collar jobs, via the ‘Optional Practical Training’ visa. Without that visa program, most of those jobs would have gone to new graduates born in Ohio. Nationwide, at least 120,000 foreign college grads are working in jobs sought by Americans graduates, and this OPT outsourcing channel will sharply increase in the next few years because the visa was expanded by President Barack Obama.

Federal rules do not set any limits on the supply of H-1Bs or OPTs, nor do they require that Americans be interviewed for or be told about the jobs that are being outsourced. Similarly, the federal rules for paying H-1Bs allow them to be be paid far less than the Americans they replace.

Several states are also allowing illegals to work in licensed professional jobs, including as teachers, lawyers and doctors.

Generally, the impact of this outsourcing trend on ordinary Americans has been underplayed by the university-trained reporters who are hired by establishment media outlets. Most reporters prefer to focus on the concerns of diverse migrants now living in the United States, in part, because the migrants increase the social and political clout of the journalists and their political allies in the Democratic Party. In effect, the reporters’ self-image as defenders of the Little Guy against Big Corporations has been globalized, so that most journalists now view themselves as defenders of vibrant immigrants against white-bread Americans.

“There is never, ever a reporter in Ohio who honestly covers how open immigration negatively affects Ohioans,” says local activist Julia Aldrich, who works with the Federation for American immigration Reform. “If they ever give any coverage [about Americans] at all it is a one-sentence quote verses the rest of the article’s support for how great illegal aliens or refugees, etc. are for Ohioans,” she told Breitbart.

“Wages are being suppressed because so many people are using the visa program,” said Hughey Newsome, a consultant with degrees from Harvard and Stanford who worked as technology consultant in Ohio in 2012. “This is something a lot of people don’t understand,” he told Breitbart.

“I’ve seen it in Ohio,” he said, when he worked for a company that helps manufacturers. “Definitely more and more in Ohio and throughout the Midwest, in the manufacturing center and through the business sector,  a lot of multinationals are using a ‘shared served service model,’” in which many support tasks are outsourced to subcontractors, he said.

“They’re doing it because it is cheaper,” he added. But “they’ll hire more Americans if the cost of H-1Bs goes up” in line with reforms proposed by Donald Trump, he said.

Several other professionals in Ohio who were contacted by Breitbart about the outsourcing trend declined to talk on the record, fearing they could be identified and blackballed by hiring companies.

Throughout Ohio, the population of foreign-born adults has risen rapidly over the last few years. This state-wide population include the H-1B and OPT guest workers, plus legal immigrants and illegal migrants, plus refugees and asylum recipients. For example, the number of foreign-born people in Ohio grew from 339,270 in 2000 up to 469,191 in 2014, according to the Center for Immigration Studies. Those numbers doesn’t count the children of immigrants, and it adds up to one immigrant for every four African-American in the state.

The state has also seen a huge inflow of lower-skilled refugees.

In addition, the government allows Ohio companies to hire blue-collar guest workers from outside the country. The blue-collar version of the H-1B program is called the H-2B program, and it is used to recruit people for landscaping, forest, restaurant and hotel work. In 2015, for example the federal government provided visas to 25 companies and labor brokers to bring in hundreds of foreign workers instead of hiring local Americans. 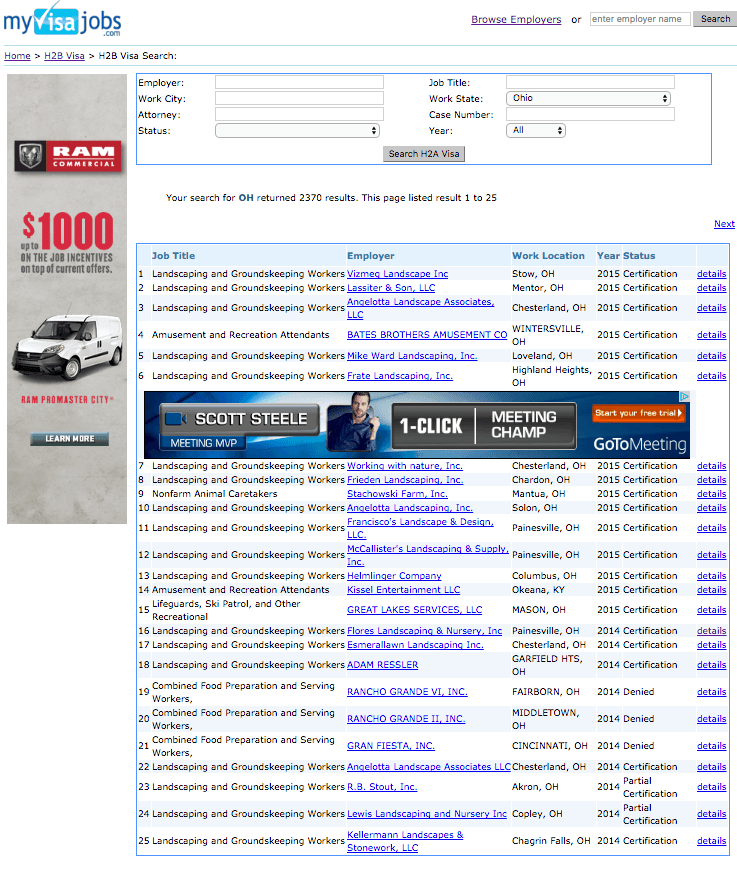 The flood of skilled and unskilled immigrants has been great for Ohio employers, including universities and major companies such as McDonalds. They’re now able to outsource more work, or hire more lower-wage foreign workers in place of many middle-age Americans, who seek decent wages to cover the cost of American education, housing, families and a normal American lifestyle.

The inflow is also good for merchants who sell more food, lodging, autos, and much else to the imported customers. That’s especially beneficial to shareholders because many of those sales are funded by ordinary Americans’ taxes, via welfare programs that are used extensively by lower-skilled immigrants.

But the extra labor has shifted wages and opportunities away from Ohioans, including both the white-collar salary earners at McDonalds and the blue-collar wage earners in low skill jobs.

In Ohio, for example, the Brookings Institute calculated that wages for African-Americans in six out of seven largest counties have crashed by 11 percent from 2009 to 2014, while wages for white people grew by an average of 3.5 percent. 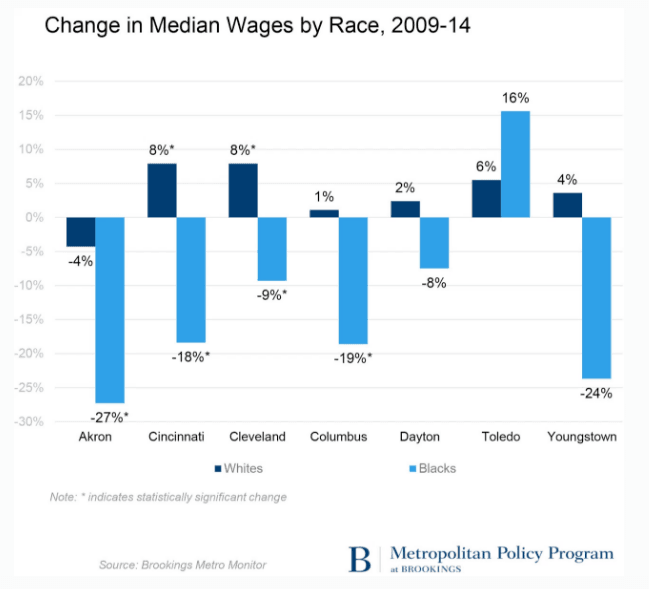 In Columbus, for example, wages for African-Americans crashed by 19 percent from 2009 to 2014 according to Brookings. Meanwhile, data from the Census Department shows that that city’s population of adults born overseas rose from 57,000 in 2000 to 102,000 in 2004, boosting them from 7.1 percent of the adult population to 11.3 percent.

The same pattern is repeated in Akron, Cincinnati, Cleveland, Dayton and Youngstown, where Brookings’ data shows drops in African-Americans wages averages a 17 percent drop amid an average income rise of 4.5 percent for the white population. That income shift while the state’s foreign-born adult population grew by roughy 16 percent between 2000 and 2014, according to a recent study by the Center for Immigration Studies.

This shift of work and money from Ohioans who compete against immigrants towards the immigrants and towards Americans who employ foreign workers, is just a small reflection of a huge national economic redistribution.

That redistribution, dubbed the “Diversity Tax,” is a $400 billion transfer that native-born Americans pay to immigrants and to employers, each and every year.

According to Harvard professor George Borjas,

The presence of all immigrant workers (legal and illegal) in the labor market makes the U.S. economy (GDP) an estimated 11 percent larger ($1.6 trillion) each year. This “contribution” to the aggregate economy, however, does not measure the net benefit to the native-born population.

Of the $1.6 trillion increase in GDP, 97.8 percent goes to the immigrants themselves in the form of wages and benefits; the remainder constitutes the “immigration surplus” — the benefit accruing to the native-born population, including both workers, owners of firms, and other users of the services provided by immigrants.

The standard textbook model of a competitive labor market yields an estimate of the immigration surplus equal to $35 billion a year — or about [an increase of] 0.2 percent of the total GDP in the United States — from both legal and illegal immigration.

Overall, the federal government invites roughly 800,000 guest-workers — plus 1 million legal immigrants plus a few hundred thousand illegal immigrants and “overstays” — into the country each year, where they compete for jobs sought by the 4 million young Americans who annually enter the workforce. That’s roughly two new foreign workers for every four Americans who enter the workforce, or, in economic terms, a federal policy of inflating the new labor supply by roughly 50 percent.

One result is that several million young American men simply have given up looking for jobs, and are falling through the floor of society.