“Scientists behind a bombshell new report revealing global warming to be worse than ever are now worried that the Trump administration may try to change or suppress it because it contradicts the president’s denialist agenda.”

Or so the New York Times has claimed. And also, in its wake, papers including the London Evening Standard and the Guardian.

This is worse than mere #fakenews.

This is #fakenews with icing and cherries on top, rings on its fingers, bells on its toes, a specially commissioned foreword by Al Gore and a rave review (“I love these lies. I could not have written better ones myself”) written from hell by the tormented shade of Josef Goebbels.

No, actually, it might even be worse than that.

First, the New York Times initially claimed — before being embarrassed by the Daily Caller into a retraction— that this draft report from a National Climate Assessment by scientists from 13 federal agencies had “not yet been made public.” 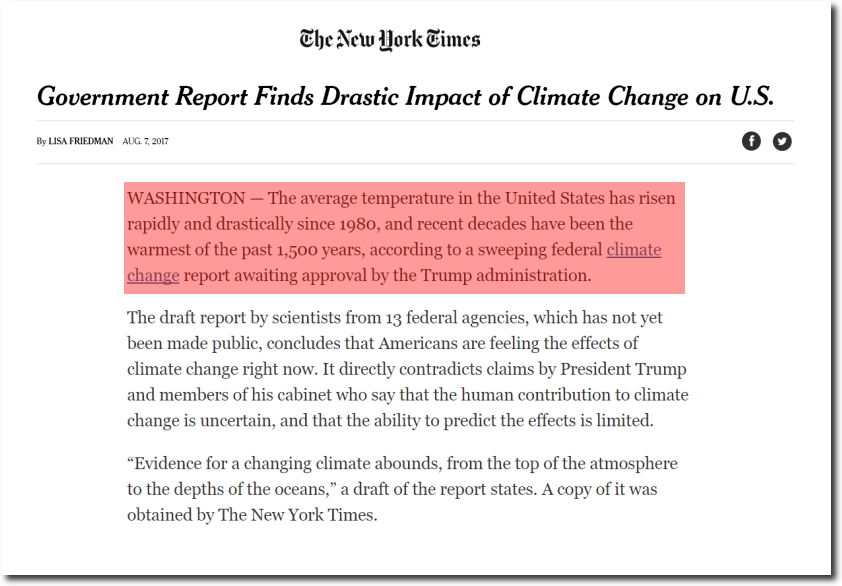 Nope. As even some of the scientists who had contributed to it had to admit, draft versions of this report had been available on the internet for months.

Important to point out that this report was already accessible to anyone who cared to read it during public review & comment time. Few did. https://t.co/eYgsj09Z97

Perhaps this was simply a mistake by the New York Times. But the suspicion arises that what it was actually doing was trying to sex up a tired old story as part of a concerted drive by the climate alarmist establishment to embarrass the Trump administration in the wake of its withdrawal from the Paris Climate Agreement.

Nonetheless, if you believe the New York Times version events, this is still dynamite:

It directly contradicts claims by President Trump and members of his cabinet who say that the human contribution to climate change is uncertain, and that the ability to predict the effects is limited.

The authors note that thousands of studies, conducted by tens of thousands of scientists, have documented climate changes on land and in the air. “Many lines of evidence demonstrate that human activities, especially emissions of greenhouse (heat-trapping) gases, are primarily responsible for recent observed climate change,” they wrote.

One government scientist who worked on the report, Katharine Hayhoe, a professor of political science at Texas Tech University, called the conclusions among “the most comprehensive climate science reports” to be published. Another scientist involved in the process, who spoke to The New York Times on the condition of anonymity, said he and others were concerned that it would be suppressed.

Yeah right. There’s only one plausible reason why anyone would wish to have this report “suppressed”: sheer ruddy embarrassment.

As both Steven Goddard and Paul Homewood have comprehensively demonstrated, the draft report is riddled with the most basic errors, lies, and distortions. It is a political document not a scientific one— thrown together in order to ramp up public hysteria about “global warming” and entrench the power of the climate mafia.

Here, Goddard points out one of its most outrageous cheats: 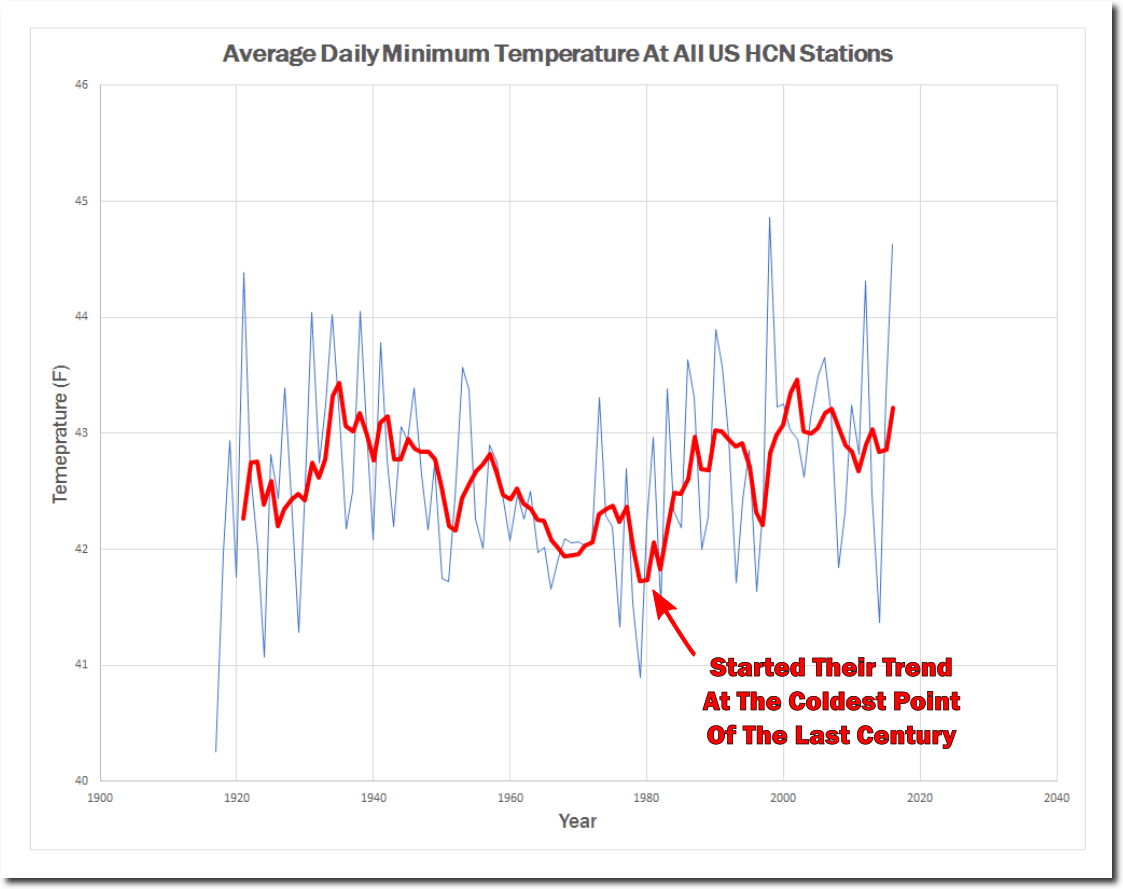 Yes, those federal scientists really are that brazen. They created a fake upward trend in temperatures by starting in 1980 — the coldest point of the last century. And they have such contempt for those outside their climate alarmist bubble they thought no one would notice.

In fact, as Homewood notes, it’s even worse than that.

The actual temperatures measured show that the US climate is no warmer now than prior to 1960.

It is only by adjusting the measured temperatures that NOAA can come up with their “hotter than ever” claims.

Homewood goes on to demonstrate that this doomsday report cobbled together by the politicised scientists of the National Climate Assessment is actually a farrago of wild claims backed up by no evidence.

No, current temperatures are NOT — as this report astoundingly claims — much higher than in “at least the last 1700 years.”

No, there have not been record droughts in the US recently: in fact quite the opposite is true.

No, there has not been dramatically increased recent rainfall in the US.

No, there have not been more hurricanes and tornadoes: again, quite the opposite, actually.

No, there has not been more extreme heat in the US – as even the report itself quietly admits. But only buried in the small print:

No the rate of sea level rise has not increased since the mid-19th century.

No, there has not been unprecedented Arctic warming.

Although the world has warmed up since the 19thC, evidence strongly shows that it is no warmer than other recent warm periods.

Far from temperatures becoming more extreme, the opposite appears to be the case.

Meanwhile weather is also not getting more extreme. Indeed, in the US evidence clearly shows that the weather has been more benign in recent decades.

When future historians write about the lunacy of the great global warming scare, one of the things they will marvel at is the fact that you could find more objective truth and scientific integrity in the work of two relatively obscure bloggers — Goddard and Homewood — than you could in either America’s most famous newspaper or, indeed, in a National Climate Assessment produced by some of the most expert scientists from 13 federal agencies.

There’s your swamp right there, Mr President. Get draining. Fast.