The “Bomb Cyclone” which ravaged the northeast U.S. this winter would have been much, much more damaging if it hadn’t been for coal-fired power.

This is the conclusion of a Department of Energy report demonstrating the vital importance of fossil fuels to the United States’ security and energy economy; vindicating President Trump’s avowed mission to revitalize the U.S. coal industry and calling into further question the need for more “clean” or renewable energy. 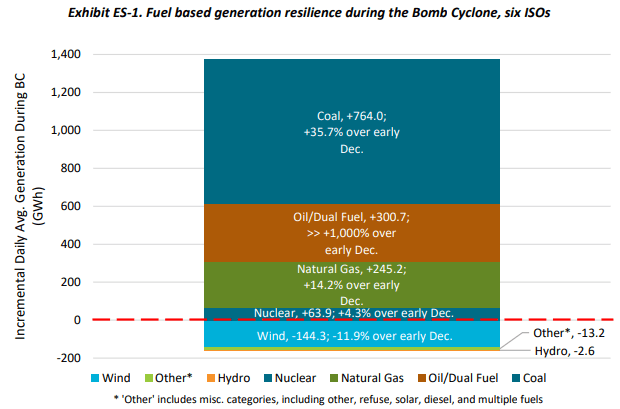 As the chart clearly shows, while coal stepped up to the plate to meet energy demand during the winter freeze, wind power was next to useless.

Energy analysts at DOE’s National Energy Technology Laboratory found that coal power kept the lights on for millions of Americans during the bomb cyclone that pummeled the eastern U.S. from late December to early January.

NETL analysts found that coal plants made up most of the incremental power utilities relied on to keep electricity flowing during the cold snap. Nuclear and oil power plants played a big role, NETL found, but coal provided 55 percent of extra power across six grid operators.

“During the worst of the storm from January 5-6, 2018, actual U.S. electricity market experience demonstrated that without the resilience of coal- and fuel oil/dual-firing plants … the eastern United States would have suffered severe electricity shortages, likely leading to widespread blackouts,” NETL researchers reported.

Yet, as Watts Up With That? notes, energy policy in New England – one of the regions hardest hit by the Bomb Cyclone – is currently doing the opposite of what is required to cope with future extreme winter weather events like this.

New England has become increasingly reliant on natural gas and renewable energy, stemming from state and federal policies to shutter coal and oil power plants. However, pipeline capacity has not kept up with demand, causing supply issues and high prices.

Two of the region’s four nuclear plants are set to retire in the coming years, along with coal and oil plants. More wind and solar power won’t be enough to support the grid during cold snaps, van Welie warned.

New England was so desperate for natural gas to keep the heat on it took two shipments containing liquefied natural gas from Russia.