Rep. Ilhan Omar (D-MN) was found Tuesday to have told a political opponent in the past that she needed to be deported — using a rhetorical tactic that Democrats have said is “un-American” and “racist.”

Last Sunday, President Donald Trump tweeted that Omar and three other far-left Democratic congresswomen in the so-called “Squad” should “go back and help fix the totally broken and crime infested places from which they came” and then “come back and show us how it is done.”

He did not call for them to be deported, and later clarified that he meant simply that if they did not like the U.S., they should leave.

Some members of a large rally crowd in North Carolina chanted “Send her back,” in reference to Omar, during Trump’s speech there last Wednesday. The president disavowed it the next day.

But Omar has, in fact, called for an opponent to be deported. Her tweet, from 2012, was unearthed as a similar tweet from Rep. Rashida Tlaib (D-MN) — one of the other “Squad” members — surfaced, in which she declared “Deport this asshole!” in 2015.

Omar’s tweet read: “we are citizens & can’t be deported, why don’t we deport you to where ever you came from.” 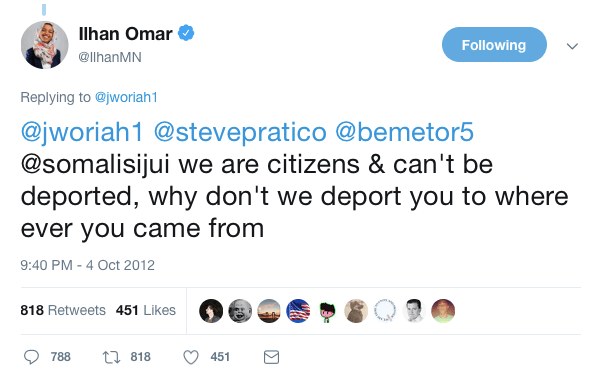 Omar was responding to a thread of comments on an article about how a mayor in Maine said that Somali immigrants to the community should “accept our culture and leave your culture at the door.”

During the course of the debate, Omar defended the right of Somalis not to assimilate: “Most people I know keep and maintain their culture,” she said, adding, “[d]on’t expect us to change either. We have as much right to be here as you.”

Nevertheless, she and Tlaib are guilty of the very thing they are accusing Trump of doing — and worse, since he specifically disagreed with calls for them to be sent “back” voluntarily.

(Tlaib, who has emphasized her family’s Palestinian origins, was born in Michigan.)

One observer suggested that telling opponents to leave the country was, in fact, a common tactic in heated political debate:

The old tweets from @IlhanMN and @RashidaTlaib show that "deport" and "go back" language was normal rhetoric in politics. It is only due the anti-Trump Corporate Media that it has been treated recently as an OMG moment; including by Never Trumpers who R dictated by MSM outrage. pic.twitter.com/ck3QZp7y3D

Tlaib also seemed to have used the phrase on other occasions:

Wallah someone deport these unAmerican ISISlike armed bikers. #PHXmosque. Because #NotMyAmerica to allow them to intimidate fellow Americans

Trump did not mention race or color in his tweets, but his opponents, including Speaker of the House Nancy Pelosi (D-CA), have specifically done so. Pelosi claimed that Trump wanted to “make America white again.”