Tokyo 2020 Olympic Games chief Yoshiro Mori is expected to resign Thursday after he sparked equal measures of outrage and blushes in Japan by claiming women talk too much in meetings.

The decision comes after a torrent of criticism from politicians to sports stars at a time the already delayed event is still under a cloud due to the global coronavirus pandemic.

As Breitbart News reported, Mori, an 83-year-old former prime minister known for public gaffes, allegedly told members of the Japanese Olympic Committee (JOC) “board of directors meetings with many women take a lot of time.”

“When you increase the number of female executive members, if their speaking time isn’t restricted to a certain extent, they have difficulty finishing, which is annoying,” he said, as some members of the council reportedly laughed.

He then went on to compound his observation.

“Women are competitive,” Mori reportedly added. “When one person raises a hand, others think they need to speak up as well. That’s why everyone speaks.”

He later retracted his words at a news conference, acknowledging it was inappropriate – but when pressed on whether he really thought women talked too much, he replied: “I don’t listen to women that much lately, so I don’t know.” 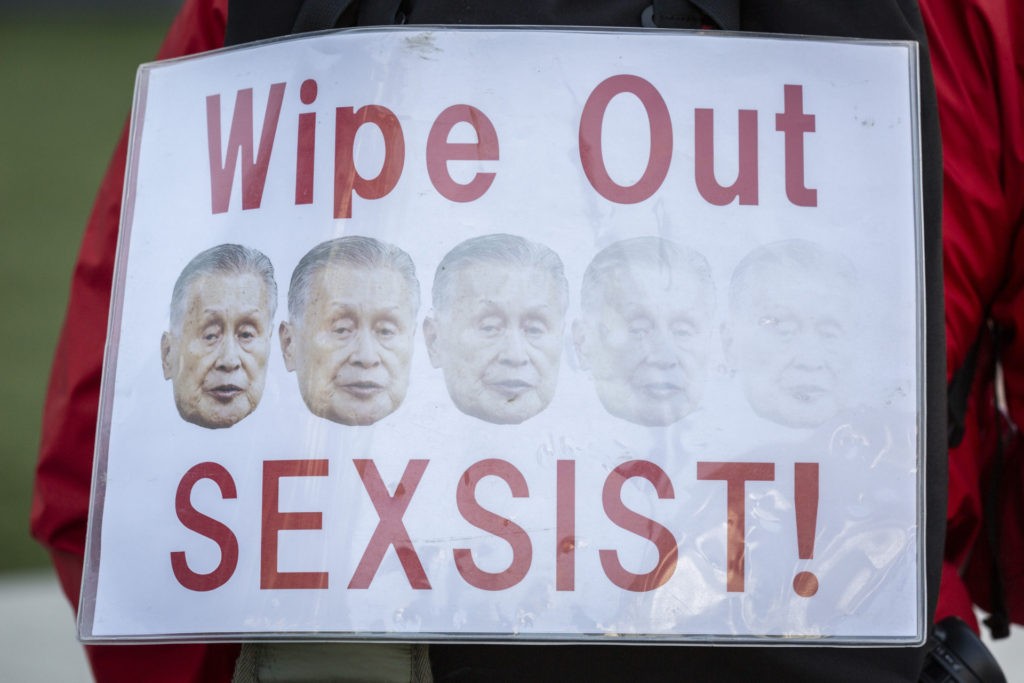 A man holds placard with pictures of Yoshiro Mori, president of the Tokyo Olympic and Paralympic organizing committee on February 11, 2021 in Tokyo, Japan. Yoshiro Mori, the head of the Tokyo Olympics and Paralympics Organising Committee, is widely expected to announce his resignation  following his sexist remarks at an earlier meeting that have been widely condemned in Japan and abroad. (Yuichi Yamazaki/Getty Images)

Public broadcaster NHK and other media said Mori met Kawabuchi Thursday to ask him to take on the top position, which will elevate him from his current symbolic role of Olympic Village mayor.

“If I am elected as president, I would make my utmost efforts,” NHK quoting him as saying after the talks.

A former footballer, Kawabuchi played a large part in popularising the game in Japan in the 1990s.

He played for Japan when the country last hosted the Olympics, in 1964, scoring a goal against Argentina.