Following Prime Minister Boris Johnson’s announcement that vaccine passports would be required for nightclubs and other public venues, thousands of Britons protested in London to demand a return to freedom.

Amid worldwide demonstrations against Chinese virus lockdowns and vaccine passports on Saturday, thousands of protesters gathered in London’s Trafalgar Square.

One protestor told Breitbart London that she had never attended a protest in her life until this year, saying: “The vaccine passport system is the final straw, it’s the thin end of the wedge”.

“The funny thing is, is that all the conspiracy theories that exist keep on coming true.”

“Deaths have dropped, people are getting vaccinated, and in theory, that’s supposed to protect us and here we still are. I see no end to it, they are never going to let go of the powers that they have stolen, they are loving it too much,” she said. 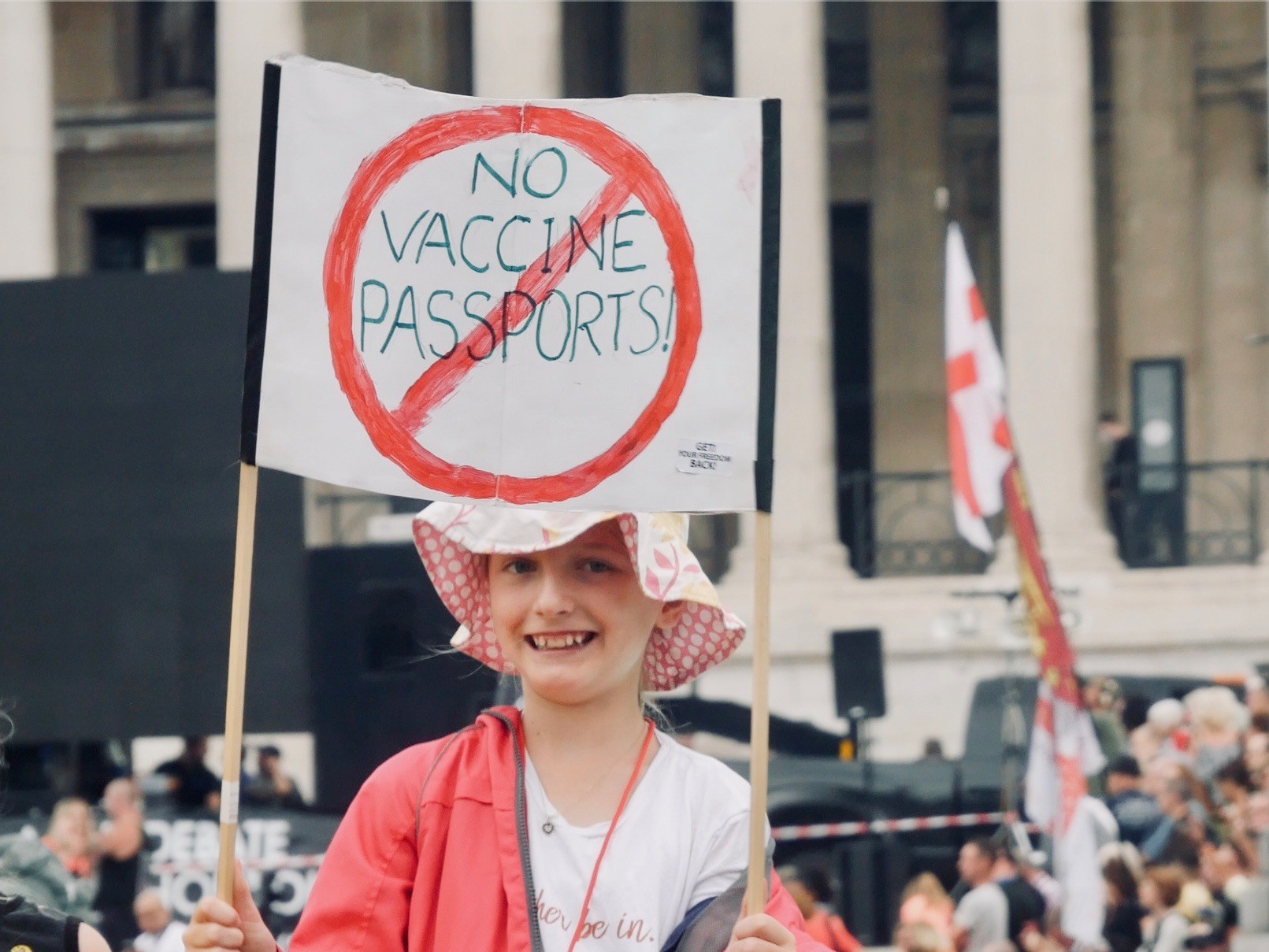 A young woman said that she was specifically motivated to join the protest because of Prime Minister Boris Johnson’s vaccine passport plan for nightclubs and public venues, saying: “You can’t strip us out of society, we are all humans here.”

Another protester told Breitbart London that he was not a so-called “anti-vaxxer” and had indeed already had one dose of a coronavirus vaccine — but he insisted that “I will not show my papers when the state asks for them because it has no right to do so.” 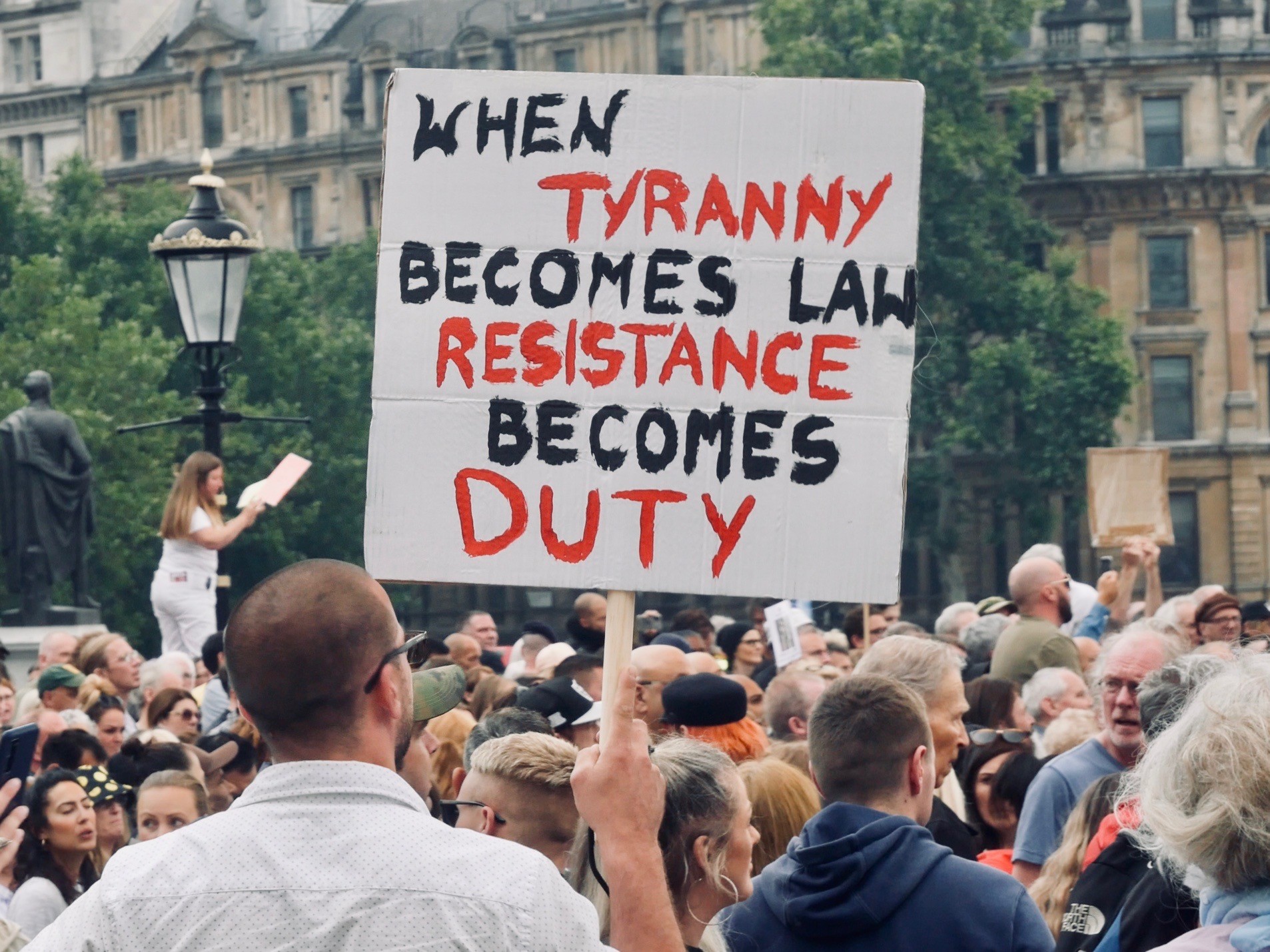 One woman said that she attended the protest to stand up for her freedoms and that she didn’t “believe the bullshit we have been fed for the last eighteen months.”

She said that vaccine passports are “fascistic”, questioning: “I thought we won the war?”

“I thought we won the Second World War but the Nazis still seem to be in power,” she lamented.

The mass demonstration in London on Saturday was mirrored throughout the world, with large-scale protests being staged in France and Australia.

An estimated 161,000 protesters demonstrated across France on Saturday against President Emmanuel Macron’s proposed vaccine passport plan, which would require health passes for many aspects of French life, including for pubs and restaurants.

The legislation, which is set to be approved this week, would also mandate that healthcare workers be vaccinated as a term of their employment.

In Sydney, Australia, riot cops once again clashed with protesters, who took to the streets of the city after its draconian lockdown restrictions were extended, despite only eight Covid-related deaths in the state of New South Wales having been reported during the latest outbreak of the Wuhan virus.

There has been growing opposition in Britain to the idea of mandating health papers domestically, with the opposition Labour Party actually coming out against the measure — a significant move, as the left-wing party has mostly backed the Tory government’s lockdown diktats throughout the pandemic.

Labour has said that they would favour public venues using rapid lateral flow testing rather than checking for vaccination status.

More than forty Conservative MPs have also rebelled against the government and signed a declaration from the civil liberties campaign group Big Brother Watch, declaring that they are opposed to “Covid status certification to deny individuals access to general services, businesses or jobs”.

Following the protest in London, Tory MP Tom Tugendhat wrote on social media: “Vaccine passports risk a social credit system of control. If we need a vaccine for events like a party conference or a nightclub — why not to travel by a train, or go to a university lecture or a shop? What other choices will result in denial of service?”

It remains to be seen, however, if the tentative alliance between the Labour Party and the rebel Tories will be enough to defeat Prime Minister Boris Johnson’s parliamentary majority and pass his vaccine passport plan.

But didn't happen, according to the BBC and the rest of the MSM (apart from the Express) https://t.co/oa49llcCcp