Former Trump chief strategist and current Breitbart Executive Chairman Steve Bannon hosted Saturday’s show on SiriusXM’s Patriot channel. As a former U.S. Navy Surface Warfare officer and the father of a West Point graduate and active duty Army officer, Bannon engaged callers in a discussion of the Army-Navy game and in praise for the current generation of men and women in uniform.

Caller Kevin from Pennsylvania shared a story about meeting a now-aging former Marine and Iwo Jima survivor, relaying the World War II veteran’s story and describing how in awe he was of the man’s tale from that day.

“Oh, my God! You’re such a hero,” Kevin said he told him, to which the older veteran responded, “I’m not a hero.” Kevin said the man told him, “The kids today that are going into the military, they are my heroes.”

Kevin said he was left in “disbelief,” but the World War II veteran elaborated, “You don’t understand. We had to go. We had no choice but to go. We were drafted, but these kids today, they see on TV and hear on the news every day what’s going on, and they’re signing up anyway to go over there.”

Bannon asked, “How do you think it’s such a misconception when you’ve got really the greatest generation, really the bravest of the brave, toughest of the tough, the people who were there at the tip of the spear in World War II and some of the toughest fighting in mankind’s history in the Pacific, when they’re saying that, how has the millennials’ brand been so misconstrued by their own countrymen?”

Kevin blamed this on the media’s focus on showing America the so-called “snowflakes” among today’s millennials while ignoring the vast majority doing what they have to do every day without complaint. “The greasy wheel always gets the grease,” he said.

The audio of Kevin’s call is available below:

Special guest U.S. Army Capt. Maureen Bannon, a 2010 West Point graduate and daughter of SiriusXM host and Breitbart Executive Chairman Steve Bannon, also discussed the competitive tradition between the various branches of service behind the game and other sports, as well.

“It’s America’s game, so it’s a great honor to be a part of it no matter who wins or loses,” she said. 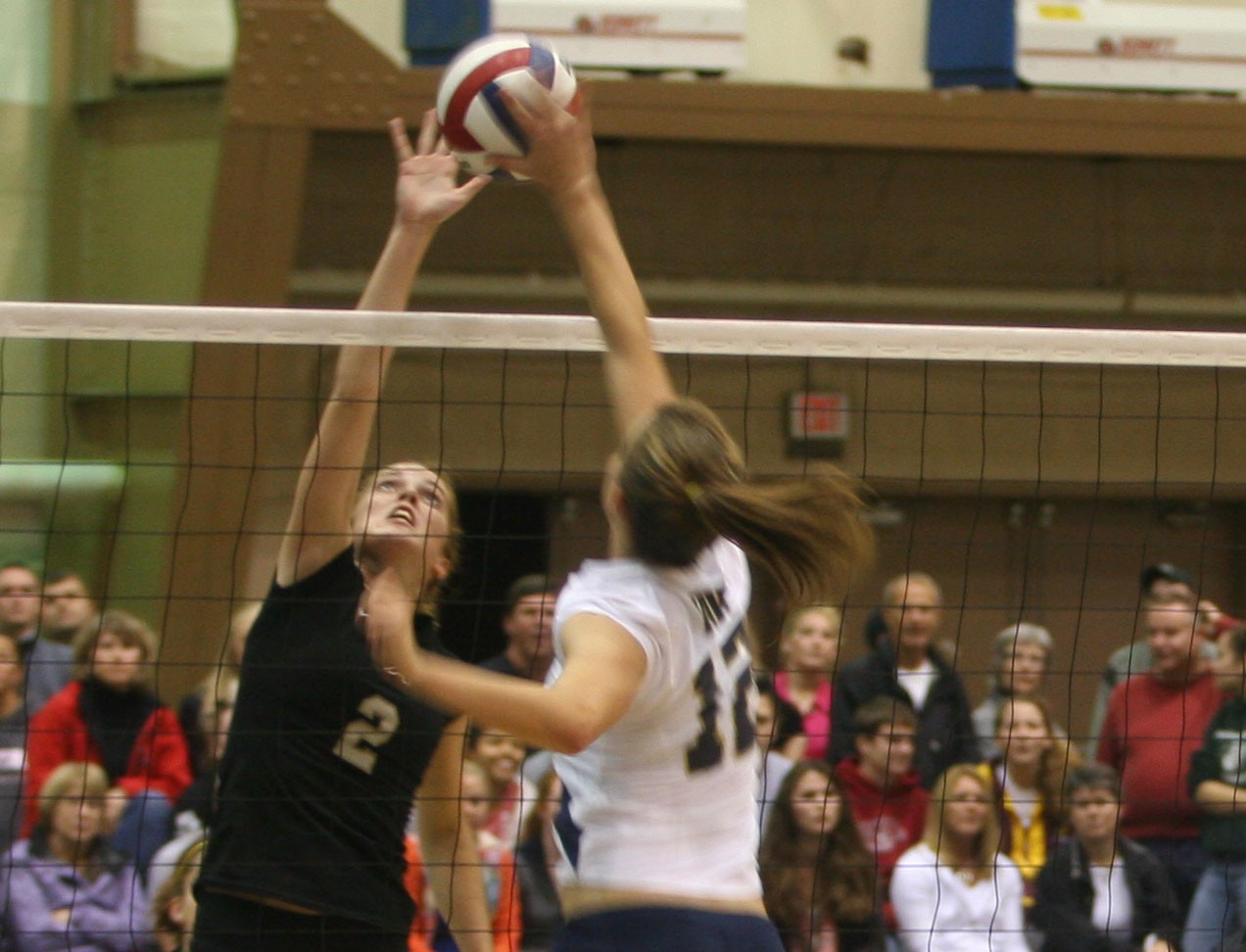 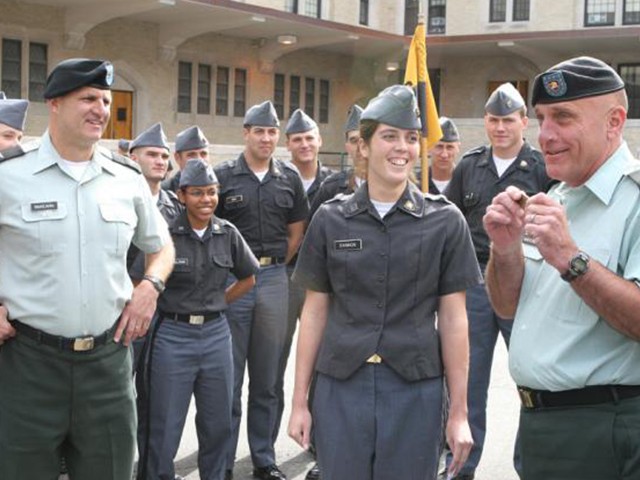 Cadet Maureen Bannon in 2009, receiving an award for recognition of her leadership in Army Women’s Volleyball (Photo: Sgt. Vincent Fusco/PAO)

Asked for her thoughts about what would happen if someone took a knee at the Army-Navy game akin to what has been happening in the NFL, Capt. Bannon replied, “As an active duty Army officer, I can’t really say much about it, but I can say that I don’t think that either team will be taking a knee. The national anthem and the flag is something that we fight for every day, so I don’t think that either team will take a knee. I have seen Army play since the NFL started taking a knee, and I didn’t see anyone on Army’s team taking a knee. So I think that that will be the same today.”

Capt. Bannon is a logistics officer who served in Iraq with the 326 Engineer Battalion under the 20th Engineer Brigade. She also served as a quartermaster officer in the 101st Airborne Division.

In speaking to this next greatest generation, Capt. Bannon said, “I’m truly honored to be part of that generation. I am very grateful for the people that have fought before me because I wouldn’t be allowed to fight today, especially the females in the military, if they hadn’t paved the way.”

“My peers, we do see on TV what is going on overseas,” she continued, “and we continuously choose to sign up, enlist, commission, and then stay in, knowing this is the future.” She went on to praise previous service members who had called into the show Saturday, adding, “I’m truly honored to be in the military.”

The audio of Capt. Bannon’s interview is available below:

Additional guests included brothers Kevin, Tim, and Tom Dunn, all former West Pointers, who also discussed the traditional Army-Navy rivalry and some of its history, including last year when current President Donald Trump attended the game.

They also each described their own service histories after graduation, which included service in Afghanistan, Iraq, and Korea. 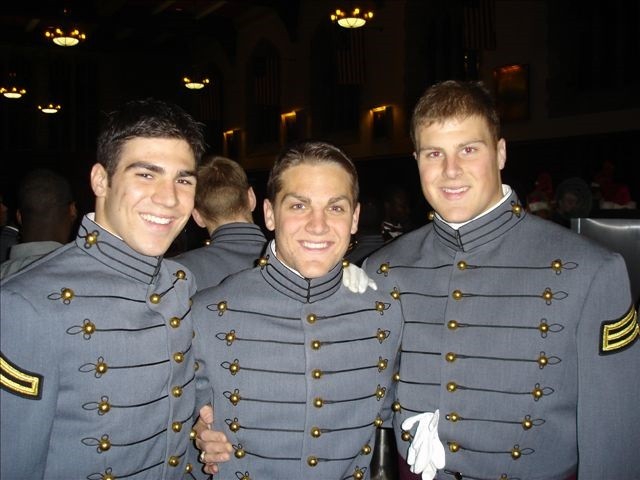 From left to right: Kevin, Tom, and Tim Dunn (Photo courtesy of the Dunn family).

One brother, Tom, discussed his time in the infantry, “which is very much boots on the ground, kicking down doors type of thing” and his Airborne and air assault training, saying he wanted to make himself “as trained and proficient as possible” because, he said, “I knew I was going in harm’s way, not just for me but also for the soldiers that I would be leading.” He also mentioned how sobering was his time in Afghanistan encountering a wide range of people, “both good and bad.”

“It was a very eye-opening experience, and I wouldn’t trade that for the world,” he said.

After leaving the service, Tom attended Harvard Business School and is now an associate at McKinsey & Company. 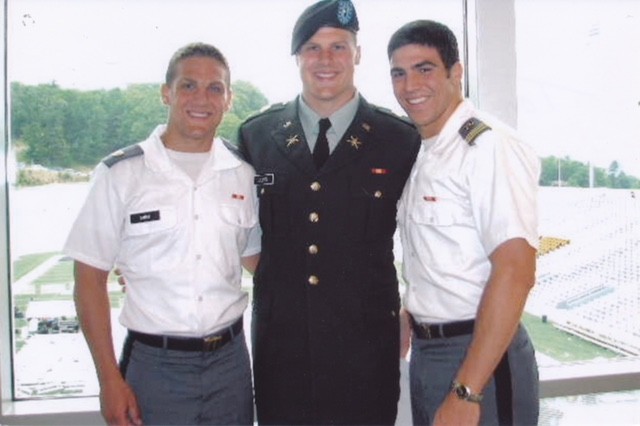 From left to right: Tom, Tim, and Kevin Dunn (Photo courtesy of the Dunn family).

Kevin Dunn, like his brothers, also went through Airborne and Ranger school. “It kind of runs in the family. Once one does it, we all have to do it,” he said. He was deployed to Iraq in Operation Iraqi Freedom before working with the joint task force in South Korea. He is currently a medical school student in Philadelphia.

Brother Tim Dunn said he was deployed to Basra, Iraq, during Operation Iraqi Freedom, as well — at the same time his brother Kevin was there. “Though our paths never crossed, it was nice knowing that my brother, my blood brother, was in the country with me,” he said. “I did over 200 combat missions in Basra, Iraq,” he added. Basra is Iraq’s second largest city and near the border with Iran.

Now out of the service, he is completing his MBA at the Wharton School of Business. 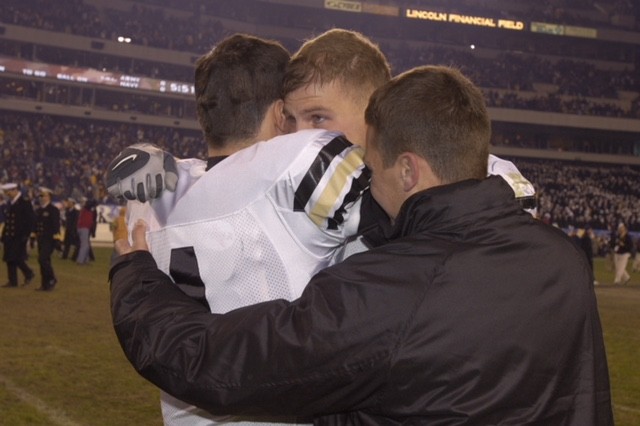 Tom Dunn (in black jacket) embraces his brothers Kevin and Tim, both in football uniforms for the 2006 Army-Navy game. Tim scored the final touchdown for Army with two seconds left on the clock, but Army lost to Navy that day (Photo courtesy of the Dunn family).

The audio of the Dunns’ interview is available below:

Follow Breitbart News on Twitter for live updates during the show. Listeners may call into the show at 866-957-2874.