Campana has served as the Larimer County, Colorado GOP chair, and was nominated by President Donald Trump last year to serve on the Public Buildings Reform Board, a commission established in 2016 to sell off unused and underutilized federal real estate.

The Colorado conservative also served on the Fort Collins, Colorado, city council. During his time on the city council, he helped reduce the city’s debt by 36 percent over four years.

Now, Campana wants to run for the Senate to oust Bennet.

“They have taken the American dream and turned it into a socialist nightmare,” the Colorado conservative added.

Boyle noted that Bennet served as one of the members of the “Gang of Eight” that proposed an amnesty for illegal aliens during the second Barack Obama term.

“Nothing could hurt the American dream worse than with what’s happening at the southern border,” Campana said, calling it “lawlessness.” 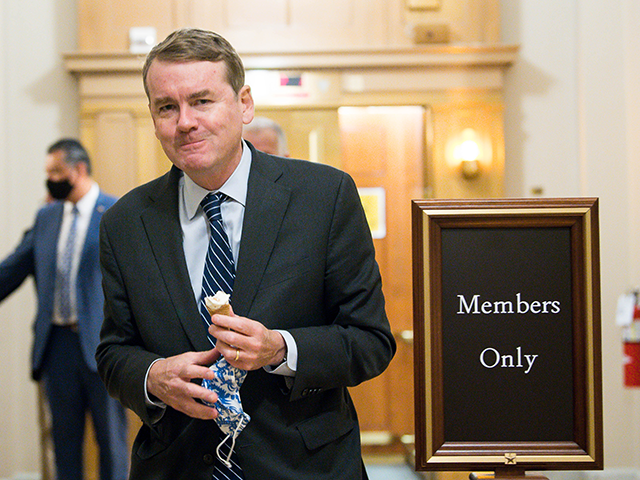 U.S. Sen. Michael Bennett (D-CO) (R) eats an ice cream cone while walking in the halls of the Capitol during the budget resolution proceedings on August 10, 2021 in Washington, DC. (Photo by Liz Lynch/Getty Images)

Campana said that former President Donald Trump was correct in implementing the “Remain in Mexico” policy, which he said helped reduce illegal immigration.

“What’s the incentive to do it legally if you have Democrat senators saying go ahead and do it illegally and get a free pass,” Campana asked rhetorically.

“My parents are immigrants let’s a pathway for people to immigrate here legally,” he said.

He said, “His voting record is aligned with Bernie Sanders 95 percent of the time.”

Campana said, “I will fight for the American dream and I will represent Colorado values.”