In a continuation of the mass social justice protests that have become commonplace at NFL games in 2020, both the Giants and the Steelers made large social justice statements prior to the first of Monday Night Football’s season-opening double-header.

The Steelers stood as a team and held a banner which read, “STEELERS AGAINST RACISM.”

Pittsburgh displayed a "Steelers Against Racism" banner ahead of their matchup with the Giants. 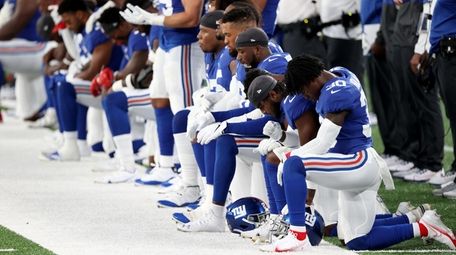 Earlier this month, when the anthem topic was brought up, Giants co-owner John Mara had said that his ‘preference is that everybody stand. But if you decide that in your conscience taking a knee is the right thing to do, I’m going to support your right to do that because I believe in the First Amendment and I believe in the right of people, especially players, to take a knee in silent protest if that is what they want to do.’

The Giants stayed on the field after pregame warm-ups and lined up on the goal line for ‘Lift Ev’ry Voice And Sing,’ known as the Black national anthem. Nobody kneeled. The Steelers remained in the locker room. Giants outside linebacker Lorenzo Carter, who has been outspoken about racial injustice, was clearly emotional and in tears.

For Week 1, the league directed every home game to play two songs during the pregame: “Lift Ev’ry Voice And Sing” and “The Star Spangled Banner.” The league does not require teams to be on the field during the anthem presentation, nor does it prohibit kneeling.