Basketball great Paul Pierce took a few shots at ESPN after being fired by the cable network, saying, “I was done with them, anyway,” and complaining that “you have to talk about LeBron all the time.”

In April, Pierce was let go from the cable sports network after posting an Instagram video recorded at a party where his friends were drinking and cavorting with strippers.

Now, on the verge of being inducted in the Basketball Hall of Fame, Pierce is saying he was about done working at ESPN regardless. But, in an interview with Sports Illustrated, Pierce stood defiant over the video.

The Celtics star was asked if he was sorry about the video that got him canned, but he replied, “for what?”

“Come on, I didn’t do anything illegal,” Pierce added.

“These motherf–kers in the Hall of Fame, some did [cocaine], f–king battery. What the f–k did I do? I was having a good time. All the people coming after me, half you motherf–kers do the same s–t. You’re just hiding it. And you all are married while you’re doing it. I’m divorced. I’m retired. I’m having fun,” he continued. 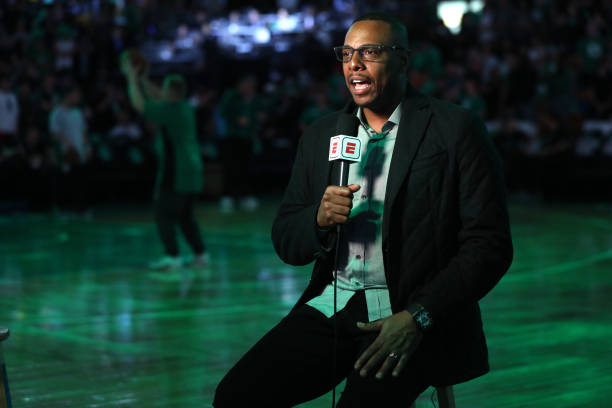 BOSTON, MA – MAY 27: Former NBA Player Paul Pierce before Game Seven of the 2018 NBA Eastern Conference Finals between the Boston Celtics and the Cleveland Cavaliers at TD Garden on May 27, 2018 in Boston, Massachusetts. (Photo by Maddie Meyer/Getty Images)
Still, as noted, Pierce said he didn’t feel comfortable at the cabler, especially with having to “talk about LeBron all the time.”

“I was done with them, anyway. It wasn’t a great fit. There’s a lot of stuff over there that you can’t say. And you have to talk about LeBron all the time,” he said.

The constant talk about LeBron James ESPN fits with the network’s financial interest since the network has a $2.6 billion deal to broadcast NBA games. And by some reports, the NBA is thinking of upping that fee to a whopping $8 billion during its next negotiation phase.

This all seems a bit out of focus, though, considering that the NBA is only the third biggest pro sports league out of America’s three major sports leagues, with both Major League Baseball and the NFL ahead by billions.