HOUSTON (AP) — Charlie Morton spun a curveball past Jose Altuve for a called third strike, his 16th pitch after taking a 102 mph comebacker off his right leg. Morton stumbled and started to fall. Turns out the leg was broken.

“I wouldn’t think it’s possible,” catcher Travis d’Arnaud said. “It’s incredible that he even like thought of going out there.”

Morton’s right fibula was fractured by Yuli Gurriel’s one-hop screamer leading off the second inning of Tuesday night’s World Series opener, a ball hit so hard it ricocheted to first baseman Freddie Freeman for an out.

By the time Morton faced Altuve leading off the third with a 5-0 lead, the leg had started to swell. Four relievers combined to pitch 6 2/3 innings and finish a 6-2 victory over the Houston Astros. 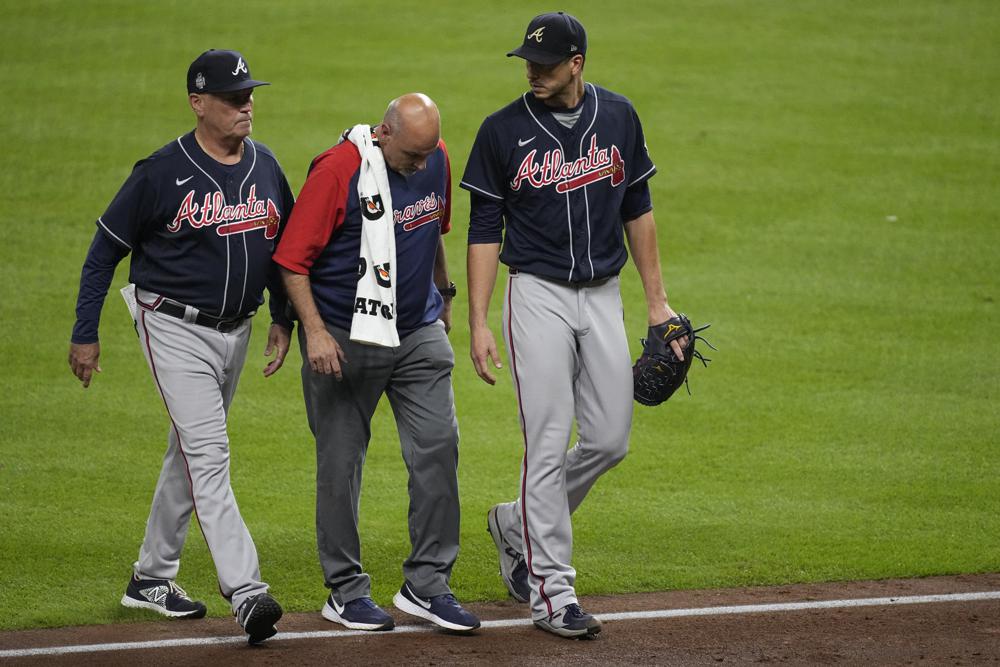 Atlanta Braves starting pitcher Charlie Morton, right, is helped off the field during the third inning of Game 1 in baseball’s World Series between the Houston Astros and the Atlanta Braves Tuesday, Oct. 26, 2021, in Houston. (AP Photo/Eric Gay)

Morton’s World Series was over soon after it started.

“You don’t wish bad on anybody,” Astros manager Dusty Baker said. “Charlie Morton is one of the best guys around, too.”

After Gurriel, Morton struck out Chas McCormick on four pitches, then retired Martín Maldonado on a liner to first base.

“When the inning was over, we meet and talk about what’s going on,” d’Arnaud recalled. “He said, `Oh, that one got me good.′ He was kind of walking a little funny. I didn’t think it was broken.”

Braves manager Brian Snitker said an initial X-ray after the second failed to show a break.

“He wanted to keep going, because he was down in the tunnel and he was throwing against the wall,” Snitker explained. “He said, `It kind of hurts more when I run. I feel good when I throw.’”

Morton went back out for the third. Still reaching up to 95.9 mph, he struck out Altuve. The 37-year-old right-hander braced himself with both arms after the pitch and grimaced as he popped back up, then rubbed at his right ankle. 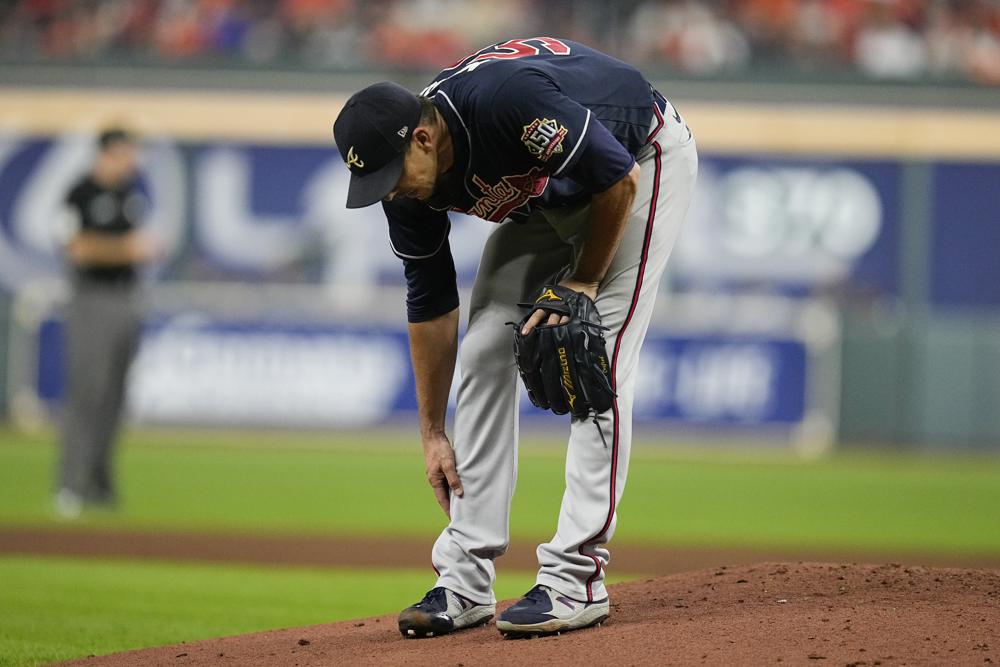 Atlanta Braves starting pitcher Charlie Morton rubs his leg before leaving the game during the third inning of Game 1 in baseball’s World Series between the Houston Astros and the Atlanta Braves Tuesday, Oct. 26, 2021, in Houston. (AP Photo/Ashley Landis)

“To go out there and strike out the next guy with a broken leg, it blows my mind,” d’Arnaud said, repeating for emphasis. “It blows my mind.”

Head athletic trainer George Poulis and manager Snitker came to the mound, and Morton walked back to the dugout, favoring a leg. By the fifth inning, the Braves said Morton’s next mound appearance was expected to be during spring training.

A.J. Minter came in and pitched 2 2/3 innings of one-run ball for the win.

“Whenever I got through with my first inning. I went up to the locker room real quick, and I heard the news,” Minter said. “You could tell he was devastated, but he wasn’t going to show it.”

Asked what was the longest he could envision someone throwing with a broken leg, d’Arnaud responded: “Maybe one pitch, and it probably went to the backstop.”

“It’s incredible that he even like thought of going out there, and I bet you it was so A.J. could have some more time to get ready. He sacrificed himself,” the catcher said. “I don’t think he knew it was broken right away, but he knew it was hurting. For him to sacrifice himself to make sure A.J. was ready and for him to strike out Altuve is incredible.”

Morton pitched the final four innings and got the win for Houston in its Game 7 victory at the Los Angeles Dodgers in the 2017 World Series. A calming, respected clubhouse presence, he was looking forward for a chance to take center stage in his former ballpark, before opponents he considers friends.

“He cares about everybody in the clubhouse,” d’Arnaud said. “Everybody knows his pedigree, and you wouldn’t expect somebody with that pedigree to be that humble and that down to earth, that caring about every little detail about everybody, not just baseball, but their lives, their families. So it’s definitely a tough, tough break for us. Like I said, I can’t wait to see him and give him a hug.”