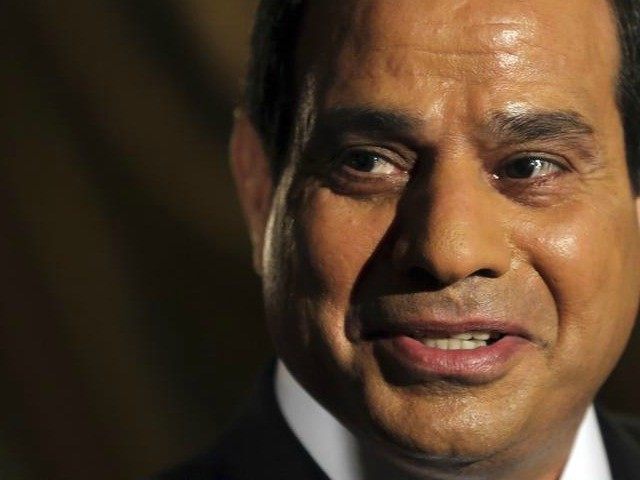 Could Egyptian President Abdel Fattah el-Sisi be the Ronald Reagan of the Middle East?

This is one of the most important questions that the Western world, excuse me, the world, should be asking itself.

I have mentioned el-Sisi before, on Neil Cavuto’s Fox News show more than six months ago, right here in a few of my past articles and even in a major newspaper column. But I bet most people don’t know about him.

How interesting that while the world is looking to America for leadership, moral clarity and a solution to the hijacking of a major religion whose by product is radical Islam we finally see a possible solution from the region itself.

The Egyptian president could someday go down in history as a leader whose courage help lift the Middle East out of the Middle Ages.

Besides his historic New Year’s Day speech at a Coptic Christian Church, being the first Middle Eastern leader who has ever attended a midnight mass, the sweeping economic changes he has made in his country, having a multitude of Mosques closed and calling for the suspension of extremist Islamic education, he is not afraid to admit that there is not a religion but a thinking that has hijacked a religion.

He has clearly defined what our president has not nor has the will to do. Notice that the recent conference that President Obama had did not have el -Sisi in attendance.

Like Israeli Prime Minister Benjamin Netanyahu, el-Sisi understands the existential threat radical Islam poses. It’s a threat our president and most on the left either do not see or just refuse to admit.

It is like when David Horowitz from the Freedom Center warned more than a decade ago about the rise of anti-Semitism on college campuses, and his words were met with skepticism and ridicule from the left. Well, if you watched MSNBC recently they ran an article that came from Joe Scarborough! You would have seen a story about what recently happened at UCLA, a clear indication of the tide of anti-Semitism being touted in the halls of higher education that is rising across the country.

A girl up for the student council was asked her religion, and when she said Jewish, a grilling began that led to her rejection. The whole of California’s higher education system must be exposed and held accountable.

The same is happening in universities across America. The flag has been taken down at UC Irvine by its student council for fear of offending illegals. What is going on? How can we all stand by while the foundation of our Republic is being dismantled?

A school that tax dollars helps support takes the American flag down from the lobby so not to offend illegals attending the school because it may act as a “trigger.”

Well, here is my trigger. If universities are endorsing anti-Semitism and the removal of the America flag then I say let’s de-fund them.

How can in 2015 students from a fraternity at an Oklahoma University still vomit the the poison of racial bigotry?

Our “One Nation under God” is being torn apart, much like what is happening to Islam. Education that is corrupting the minds of our youth. A plague that is infiltrating our country like a worm that can destroy and corrupt your computer has infected our educational system, much like that which has happened to the Middle East and Islam.

It has been through indoctrination and a way of “thinking” as al Sisi describes it that has given rise to Radical Islam. He sees this and is coalescing other Arab leaders to help define, reform and clarify what is a very dangerous situation.

El-Sisi asks for what he calls a “revolution” “urging moderate Muslims around the world to stand up to terrorists twisting their religion.” He battles and asks for a coalition of Arab countries to help with this, while in response to the beheadings of Christians he sent Egyptian airstrikes on ISIS targets in Libya.

While he does this America has neglected his pleas for more equipment that would help in combating radical Islam. After the Muslim brotherhood was defeated in Egypt the U.S. suspended shipments of much needed arms. The question is why has President Obama and his administration shown more support for the Muslim Brotherhood and Iran’s nuclear power deal than it has for el-Sisi, a man whose courage, ideas and vision for combating the hijacking of a religion, must be supported?

President Obama’s lack of being able to dig into his psyche and pull out a definition to this movement facing the world has been perplexing. When he was elected, even though my politics were not in lock-step with his, I was moved and wanted him to succeed. I wanted nothing more than for all the hoopla about his pastor Reverend Wright’s “God Damn America” speech to be just that, hoopla.

It appears it was not.

So while the world is wondering what has happened to America’s leadership, while we long for the moral clarity of an American leader that demands, “Mr. Gorbachev, tear down this wall” we see someone out of Egypt, the country that fathered Sayyid Qutb who is considered the father philosopher of “Political Islam,” who says no more to the wall of thinking that has given rise to Radical Islam. He’s a leader that hopefully can lead the world out of the darkness that has befallen us.

Below are some excerpts from el-Sisi’s New Year’s Day 2015 speech.

I am referring here to the religious clerics.  We have to think hard about what we are facing—and I have, in fact, addressed this topic a couple of times before.  It’s inconceivable that the thinking that we hold most sacred should cause the entire umma [Islamic world] to be a source of anxiety, danger, killing and destruction for the rest of the world.  Impossible!

Is it possible that 1.6 billion people [Muslims] should want to kill the rest of the world’s inhabitants—that is 7 billion—so that they themselves may live? Impossible!

I am saying these words here at Al Azhar, before this assembly of scholars and ulema—Allah Almighty be witness to your truth on Judgment Day concerning that which I’m talking about now.

All this that I am telling you, you cannot feel it if you remain trapped within this mindset. You need to step outside of yourselves to be able to observe it and reflect on it from a more enlightened perspective.