CNN cut away from speakers who spoke out against illegal immigration at the Republican National Convention in Cleveland on Monday night, turning instead to its daily stable of talking heads, and coming back for a conventional politician’s speech.

Mary Ann Mendoza, Sabine Durden, and Jamiel Shaw, who each lost a child through crimes committed by illegal aliens, spoke from the heart about why they supported Donald Trump’s proposal to enforce immigration law and build a border wall.

Shaw, who is black, told the tearful audience in Cleveland’s Quicken Loans Arena “You’d think Obama cared, and black lives mattered … Only Trump called me on the phone one day to see how I was doing … Trump will put America first.”

But CNN, which lately fought to rebuild its audience by including more conservative perspectives, filtered out those voices, returning to the speeches in time for Rep. Michael McCaul (R-TX), who gave a good but otherwise unremarkable address.

A purported screenshot spread through social media with CNN’s chyron apparently describing these speakers as “impacted by undocumented immigrants” — a cold whitewash of the fact that their family members were murdered. 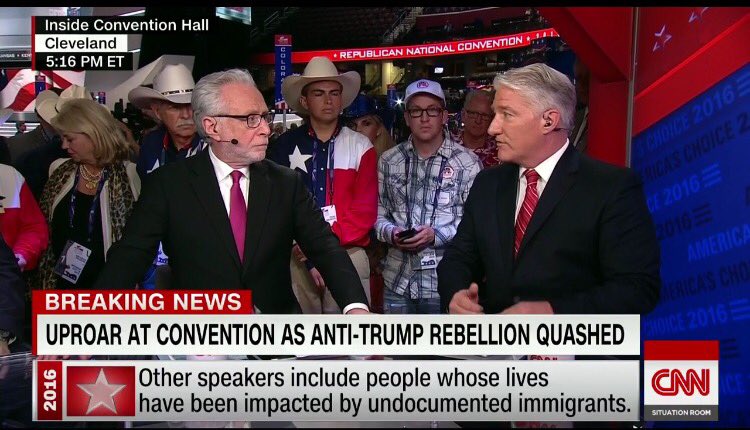 The network did carry the live speech of Pat Smith, mother of Benghazi victim Sean Smith. But it bracketed her speech with fact-checking, suggesting that despite her feelings that Hillary Clinton was to blame, there was no direct link to the former Secretary of State. CNN’s fact-checker later labeled the claim that Clinton was responsible for the Benghazi deaths as “false.” (Jake Tapper did push back, pointing out that the argument was that Clinton was responsible for her entire department.)

The fact that victims of crimes by illegal aliens have largely been ignored is part of the secret of Trump’s success. When Kate Steinle was murdered by an illegal alien — with multiple deportations and felony convictions — in San Francisco last July, it was Trump alone who took up the issue, and the cause of other bereaved families. That gesture helped propel him from the back of the Republican pack to the front.

But to see and hear the families of victims, you had to watch Breitbart or C-SPAN.