McALLEN, Texas — A Mexican gubernatorial candidate is the target of a money laundering probe by U.S. federal authorities in connection with a series of shell companies in Panama. The companies were exposed by the document leak known as the Panama Papers.

According to a series internal messages between the U.S. Department of Treasury and the U.S. Department of Homeland Security, Baltazar Hinojosa Ochoa is the subject of a probe by the two agencies for having sent money from U.S. bank accounts to some offshore shell companies in Panama under the control of his family.

As Breitbart News previously reported, the Panama Papers deal with a large document leak that revealed the inner workings of a firm named Mossack Fonseca. The firm was being used by many wealthy individuals to set up shell companies in order to hide large amounts of money and assets.

Hinojosa is the gubernatorial candidate for Mexico’s Revolutionary Institutional Party (PRI) for the state of Tamaulipas, Mexico. The candidate has been named in witness testimony in Mexican court documents as having been at meeting between politicians and drug lords when cartel bribes were being paid, as previously reported by Breitbart Texas. Those cartel cash bribes were paid to the PRI by key  figures within the Gulf Cartel and the Los Zetas cartel to finance elections in exchange for letting the criminal organizations operate freely throughout the state.

New information revealed that Hinojosa is also a target of investigation in the U.S. where law enforcement agencies have been exchanging information in connection with possible money laundering activity by the candidate.

The documents were initially published by Mexico’s Proceso and then independently obtained by Breitbart Texas.  The messages confirm that Hinojosa has an offshore company in Panama. 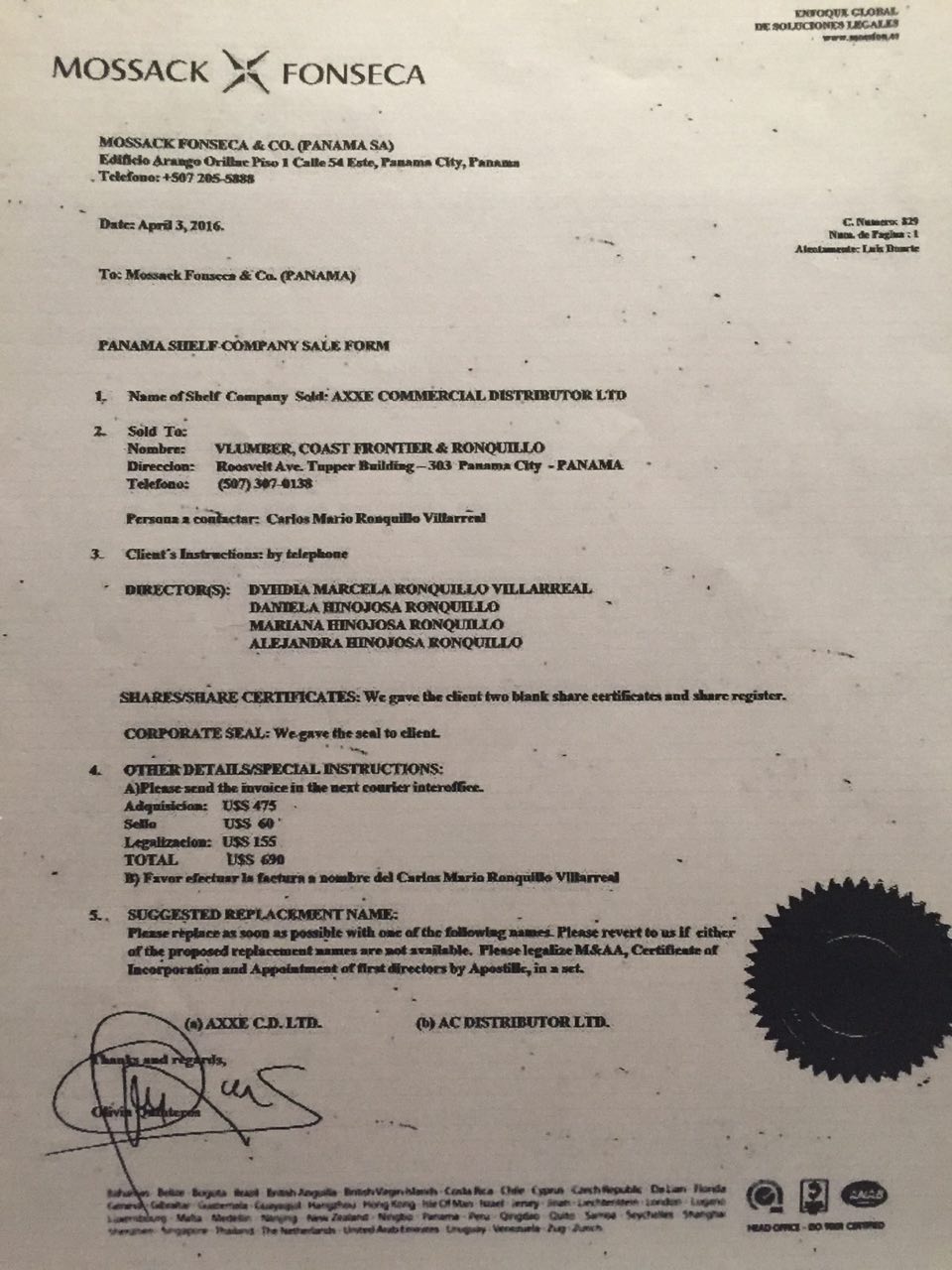 The leaked communication thread begins on April 20, when with a memo from the Treasury Department to U.S. Homeland Security in reference to requested information. In the document they mention “the candidate for governor of Tamaulipas” 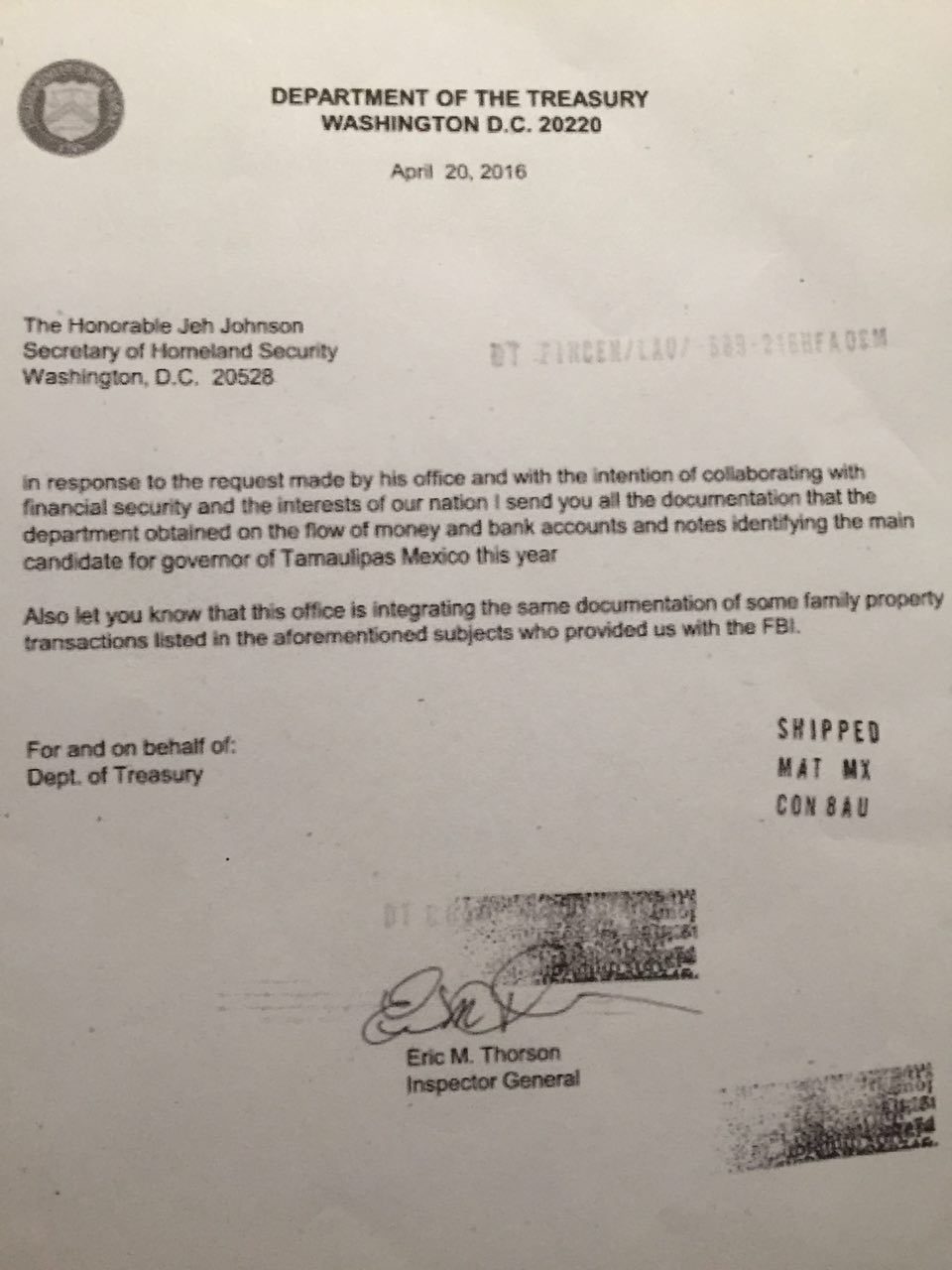 In a second message from the Treasury Department to U.S. Homeland Security dated May 2,  the department stated that it had provided all the relevant information they have on Baltazar Hinojosa. The department further tells DHS that Hinojosa already has a record in treasury for “possible money laundering.” In their memo, the Treasury Department further advises the result of research carried out by their officers in connection with all bank accounts connected to Hinojosa and his family. 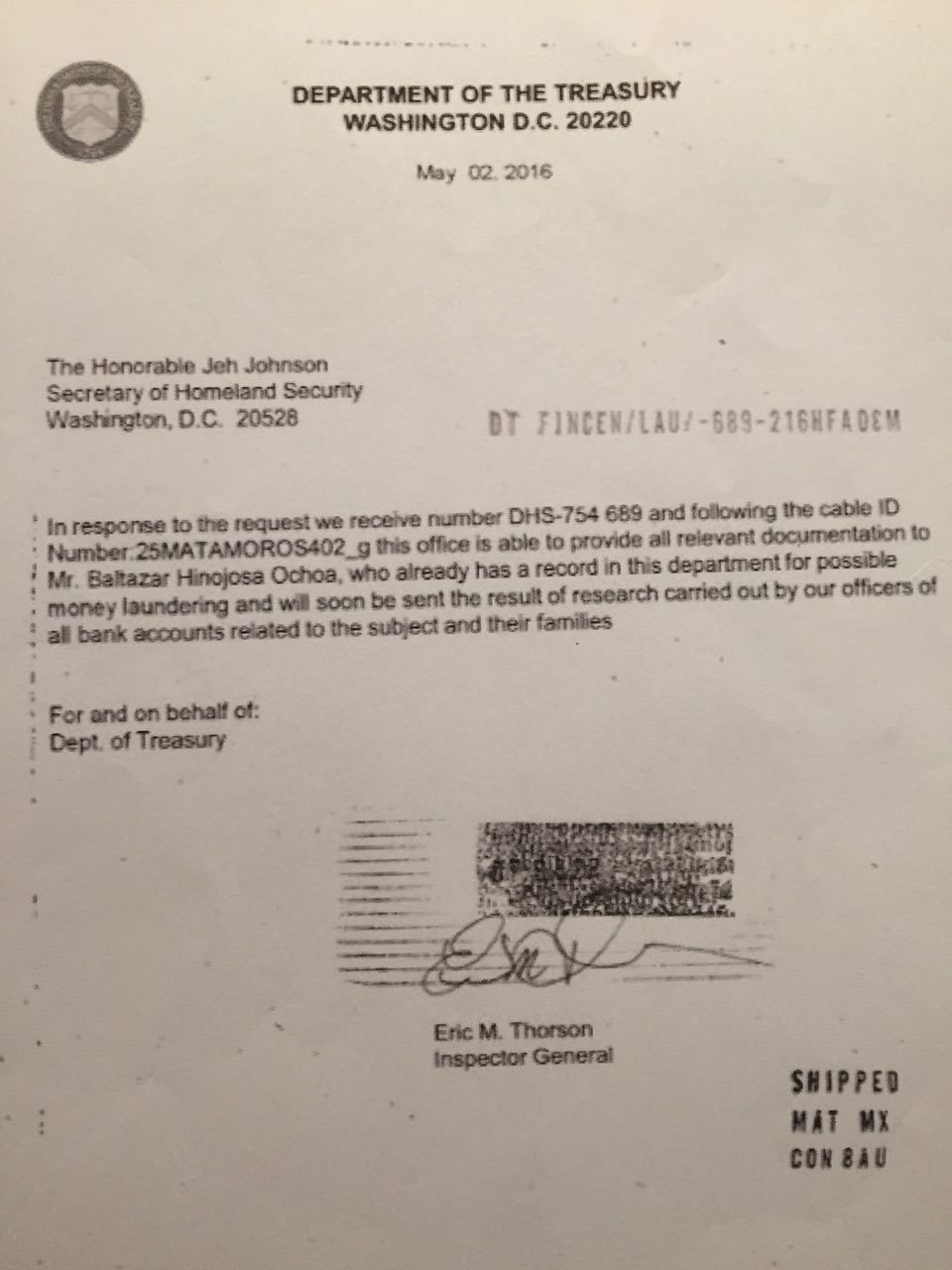 In the third document from May 17, the Treasury Department states that their research revealed that Hinojosa had his relatives hold an offshore company in Panama, and that the assets used to start the company originally came from U.S. bank accounts. 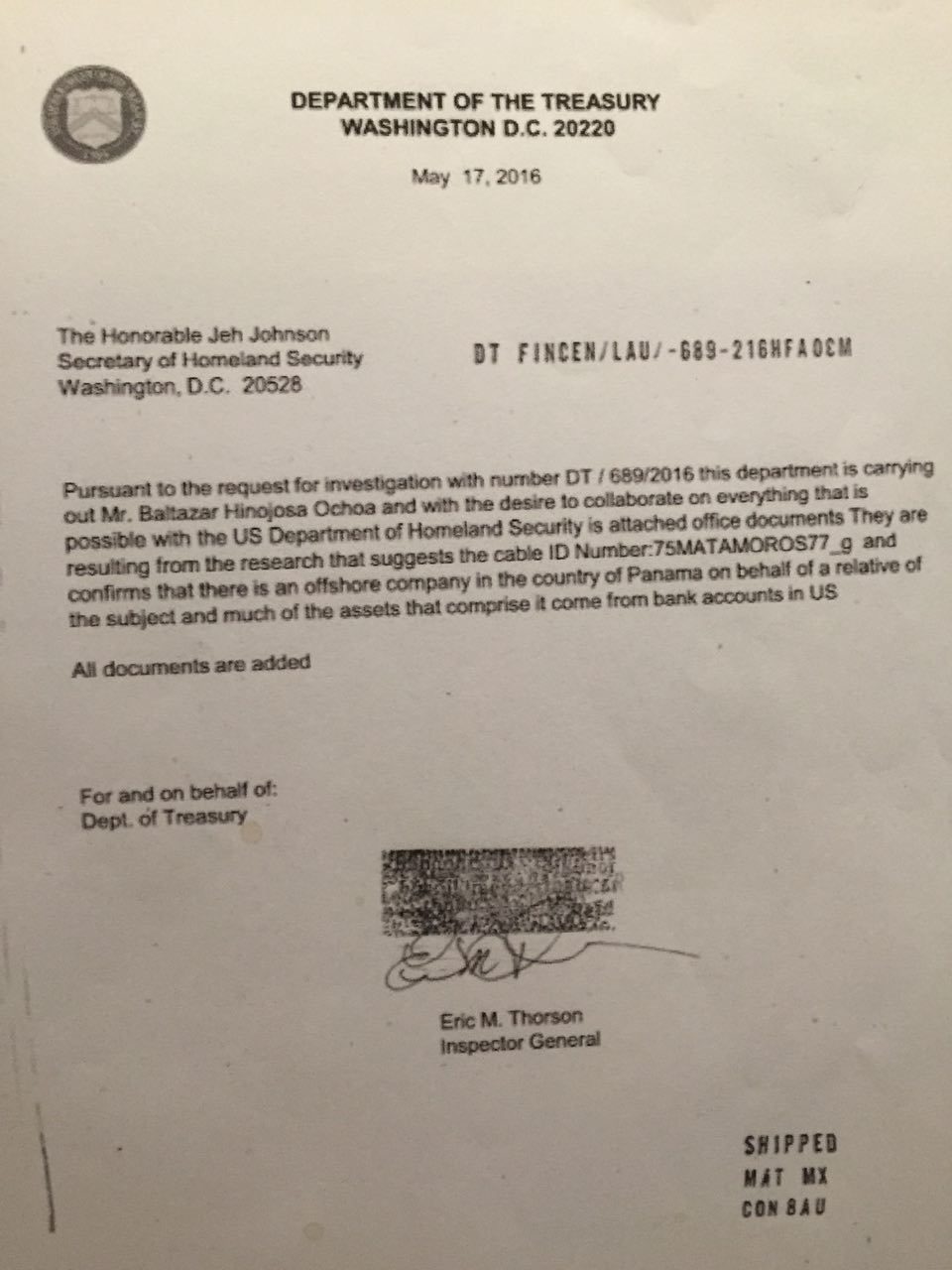 Breitbart Texas has previously reported on another former mayor of Matamoros who had been tied to off shore accounts and money laundering. Former mayor Erik Silva Santos, also from the PRI, is currently a fugitive of the U.S. Department of Justice after having been indicted on money laundering charges in federal court. The charges against Silva accuse him of taking bribes. He has also been accused of embezzling money from the city’s coffers, putting the proceeds into U.S. and offshore accounts as well as into the purchasing of properties.

As previously reported by Breitbart Texas, Hinojosa’s party, the PRI is the same party that has been in power for more than 80 years in Tamaulipas with some of its key figures being tied to various acts of corruption. Former Governors Tomas Yarrington and Eugenio Hernandez are also considered fugitives by the U.S. Department of Justice on money laundering charges. In the case of Yarrington he is also wanted on drug conspiracy charges for his alleged role in working closely with the Gulf Cartel, Los Zetas Cartel and the Beltran Leyva Cartel.