Leonardo DiCaprio delivered a career-best performance on Tuesday in the role of Whiny, Entitled, Millionaire Movie Star Who Can’t Accept That The President Won’t Take His Views On Climate Change Seriously.

DiCaprio was speaking at the Yale Climate Conference, where he took the podium to rehearse the usual litany of junk-science claims made by alarmists to justify their $1.5 trillion a year Enron-style scam.

“We have watched as storms, wildfires, and droughts have worsened, and as extinctions have become increasingly frequent. And some of us have also listened as the scientific community sounded alarm bells about climate change as far back as the early 1990s.”

Not a single word of that first sentence is true by the way – and that includes the “we” and the “ands.”

There is no evidence whatsoever that “extinctions have become increasingly frequent.”

Nor, have “storms, wildfires, and droughts” worsened as a result of climate change.

Having set out his stall of predictable and scientifically illiterate eco tosh, DiCaprio proceded to the most moving part of his peroration: the bit where he used his famed acting skills to deliver his “J’accuse” moment to evil, climate-denying President Trump and his wicked henchmen.

“Yet with all of this evidence – the independent scientific warnings, and the mounting economic price tag – there is still an astounding level of willful ignorance and inaction from the people who should be doing the most to protect us, and every other living thing on this planet.”

All this, despite the fact that, as DiCaprio petulantly noted, he had made a personal visit to “President-Elect Trump” last December, where he had outlined a “comprehensive plan to tackle climate while harnessing the economic potential of green jobs” which would give the U.S. “the potential to lead the world in clean energy manufacturing.”

Amazingly, this was an offer President Trump found easy to refuse. 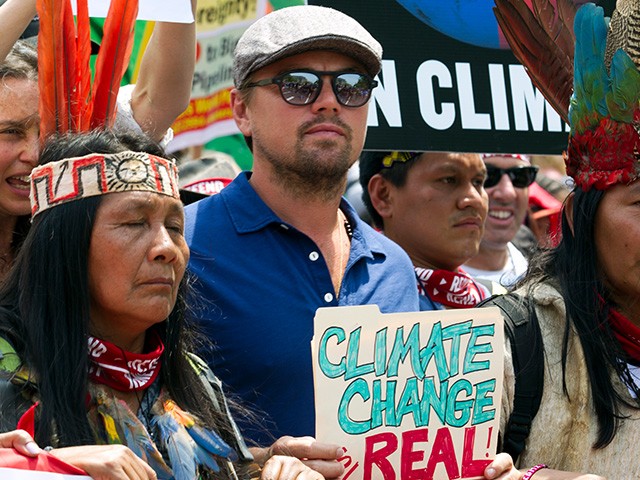 US actor Leonardo DiCaprio (2nd L) marches with a group of indigenous people from North and South America, during the People’s Climate March in Washington DC, on April, 29, 2017. (JOSE LUIS MAGANA/AFP/Getty Images) 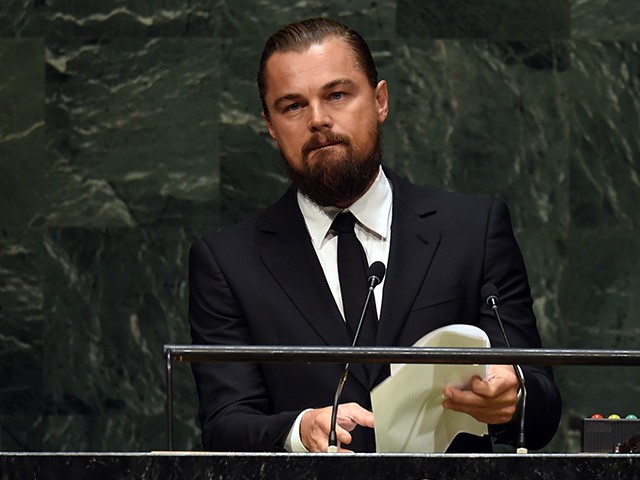 Leonardo DiCaprio, actor and UN Messenger of Peace speaks during the opening session of the Climate Change Summit at the United Nations in New York September 23, 2014, in New York. (TIMOTHY A. CLARY/AFP/Getty Images)

Perhaps it’s because he knows that green jobs are Potemkin jobs. They only exist through government subsidy; and they destroy jobs in the real economy.

Not, obviously, that DiCaprio would know this. He’s a mummer, not a thinker: brilliant at impersonating being raped by a bear; understanding science and economics, not so much.

Naturally, DiCaprio couldn’t resist dragging in the recent spate of hurricanes to bolster his argument about the menace of climate denialism.

Though they weren’t attributable to climate change, he said, they know “without doubt, in the science community, that it’s making them more extreme and more destructive.”

Again, there is no evidence for this. In fact, the most powerful hurricane year in the last century was 1933.

Maybe DiCaprio should consider a career in the movies. This climate nonsense is just a waste of good acting talent – and the scripts are risible.