Nigel Farage’s favourite London pub, the Westminster Arms, is under threat from corporate developers who are looking to turn half the pub, and the building next door, into luxury apartments.

Breitbart London can exclusively reveal that a planning application that has gone into Westminster Council shows that the company, GM Investment Trustees Limited, a subsidiary of the massive, American firm General Motors, is looking to turn the area fully residential. 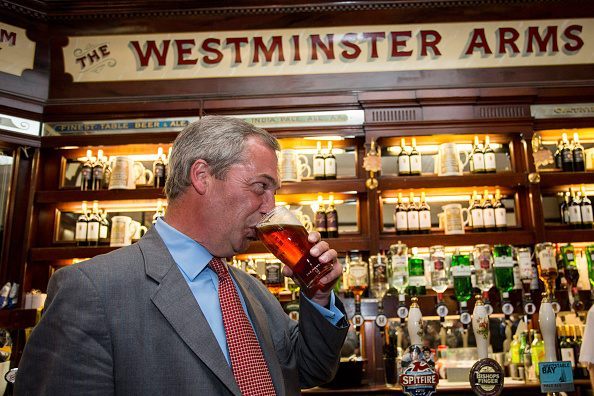 The Westminster Arms, where Mr Farage is often spotted with a pint of Master Brew, would be forced to close if the planning application is approved, as the Wine Bar downstairs forms a key part of its revenue stream. The ladies toilets are also in the same basement. The pub owners are concerned that if the next door building is turned into apartments, there would no longer be any drinking allowed on the street outside the Arms, which offers views of the Treasury, Westminster Abbey, Westminster Central (Methodist) Hall, and is just a few steps away from Parliament Square and the Palace of Westminster.

Mr Farage told Breitbart London this morning that he would do everything he can to save the pub – and supporters of the #upinarms campaign to save the pub have pointed to the fact that the House of Commons may have to move to the next-door Queen Elizabeth II conference centre – at which point the Westminster Arms would become MPs’ boozer of choice.

And it wouldn’t be the first time. The Westminster Arms was rebuilt in 1913, and still has an original ‘division bell’ inside, which was placed there to let boozing MPs know that there was a vote in the Commons chamber, and that they would have to leglessly hot-foot it across Parliament Square and into Parliament to vote.

A campaign page, called #upinarms, has been launched today, and is said to enjoy the full support of the UK Independence Party leader.

Those wishing to help save the Westminster Arms can visit the campaign page to help offer their support, but you only have until July 3rd to do so!

UPDATE: The Campaign for Real Ale has weighed in, with a spokesman telling Breitbart London, “Pubs across the capital are being threatened with closure as property values continue to rise and developers look to exploit weaknesses in the current planning system for their profit. We would urge Westminster council to do everything in their power to ensure this valued community pub remains open for the public, MPs and Government Ministers to enjoy a pint of real ale in – as they have done for many years.”

UPDATE 2: Mr Farage has been to the Westminster Arms today to pledge his support.