Sweden’s Migration Agency (Migrationsverket) received 11,743 applications for asylum in August, making a total of 48,774 so far this year. Having been 6,619 in June and 8,066 in July the number for August represents the highest number of asylum seekers in a decade.

Asked to predict figures for the year as a whole, however, Swedish authorities appear to be in a state of confusion. In November 2014 the prediction was that Sweden would receive 95,000 asylum seekers in 2015. Then in February this year the figure was revised down to 90,000 for the year, with The Local reporting that armed conflict in Northern Africa was making it more difficult for migrants to reach Europe.

The Migration Agency explained: “The main reason for the predicted number going down is that it has become more dangerous to travel through Africa to Europe. This leads to costs of smuggling people across borders going up, which affects people from a poorer background more than people from a wealthier background. So we are still seeing a lot of Syrians migrating to Sweden, but fewer Eritreans.”

Having reduced the number of asylum seekers expected for the year to 74,000 at the end of July, saying six month waiting times and overloaded bureaucracy were pushing people towards Germany instead, the numbers have now yet again been changed.

“We have had an unexpected sharp flow from Turkey into Greece and then north through [the Former Yugoslav Republic of] Macedonia and Serbia into Hungary. We had not forecast that level of increase. We are seeing rising numbers throughout Europe right now and it is then only natural that our own numbers increase.”

With the numbers revised upwards asylum applications are expected soon to accelerate past last year’s figures (as shown in the graph below from the Swedish Migration Agency). 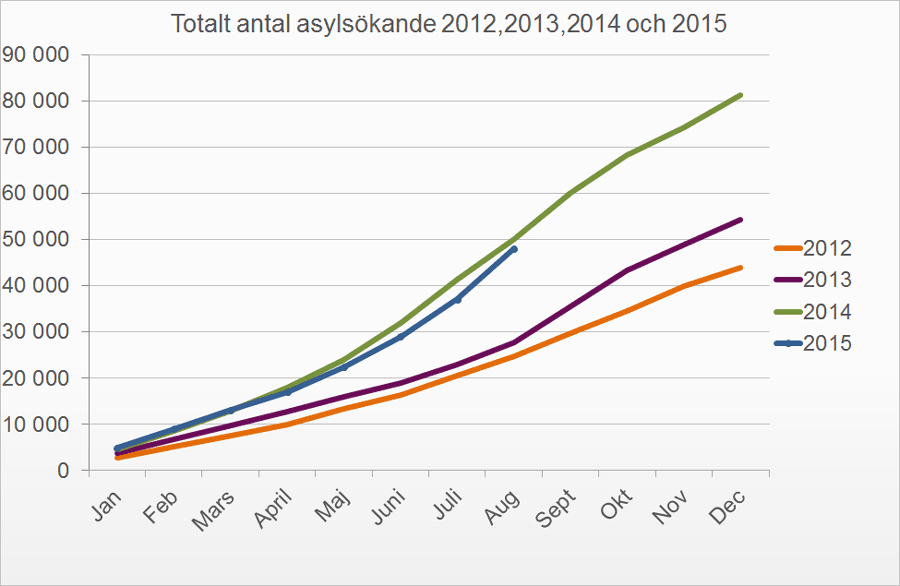 Sweden’s generous welcome to asylum seekers has fed the growth of political opposition in recent months. Recent opinion polls have shown the anti-mass migration Sweden Democrats gaining unprecedented levels of support. In fact the party’s leader, Jimmie Åkesson, has taken to speaking of preparing for government, as reported by Breitbart London.

At the same time, the reception for those asylum seekers actually reaching Sweden is still positive. Local charities and support groups note an increased willingness to help. The Local reports that when Stockholm’s city council put out a Facebook appeal for volunteers to support refugee children this week they were inundated with calls and donations to Save the Children doubled in May to August from the same period last year.

Relations between migrant groups are somewhat less cordial, however, creating a crime wave in parts of the country. The southern city of Malmö is becoming particularly notorious as stabbings and even grenade attacks become commonplace events.