Pro-migrant activists in Greece swam in font of a ferry as it attempted to returning migrants to Turkey, clinging to the anchor chain to stop the vessel moving off.

BBC Radio 4 this morning repeatedly claimed they were ‘migrants’, not Western activists. Yet pictures show the activists to be white, blonde, and sporting dreadlocks.

The incident happened as a group of 45 Pakistani migrants were preparing to leave the port of Mytilene on the Greek island of Lesbos last night. They required individual guards at one point to stop them absconding.

#Activists jumping in water as a protest against the deportation of #refugees from #Lesvos to #Turkey pic.twitter.com/9Cvth3tJVM

The boat was one of two carrying more than 120 migrants returned to Turkey from the Greek island of Lesbos on Friday, in the second round of deportations under an EU deal with Ankara to stem mass migration to Europe across the Aegean Sea.

A first group of 202 migrants, most from Pakistan and Afghanistan, arrived in Turkey on Monday. Turkey’s parliament approved overnight an agreement enabling Ankara to repatriate Pakistani migrants.

Images showing one guard for each migrant being deported from Greece to Turkey at dawn. Thanks @Baitona for sharing pic.twitter.com/1hVQZpwdUY

A total of 325 migrants have so far been sent back from the Greek islands under the deal, which the U.N. refugee agency (UNHCR) has condemned and rights advocates say may violate international law.

Meanwhile, other migrants continued to reach the Greek islands. Greek authorities said 149 had arrived in the past 24 hours on Lesbos, Samos and Chios, up from 76 the previous day.

In late March, Ankara and Brussels agreed to close the so-called Balkan route by which over a million migrants traveled through Greece and Macedonia north to the other EU member states during the past year. 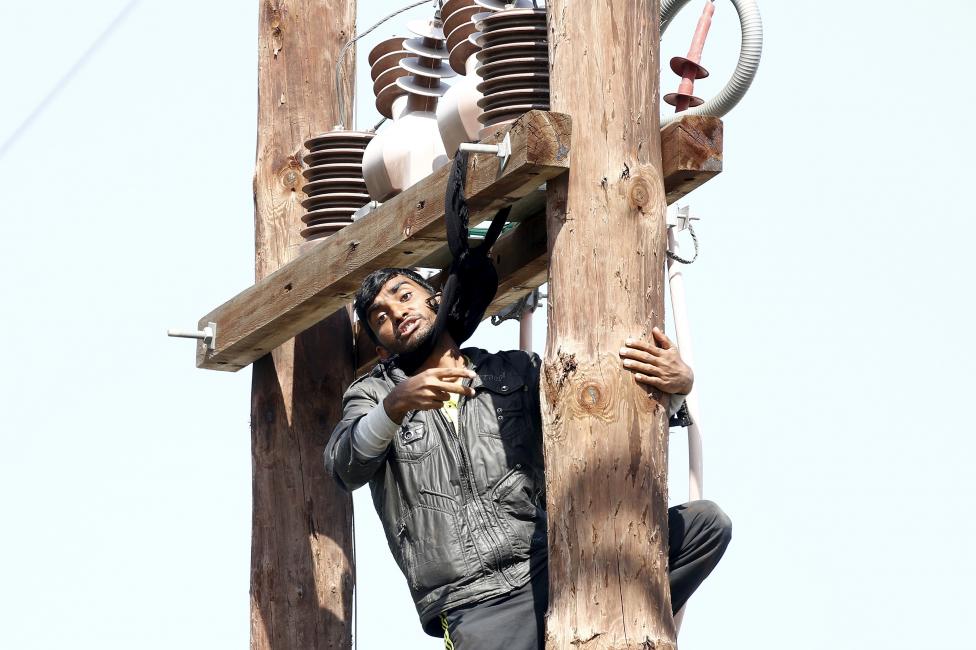 A Pakistani migrant threatens to hang himself from a utility pole during a demonstration inside the Moria registration centre on the Greek island of Lesbos, April 6, 2016.

According to the agreement, in exchange for financial and political favours, Turkey pledged to take back all the “irregular” migrants who cross into the European Union from its borders.

Brussels will provide €3 billion in aid to Ankara for the more than two million Syrian refugees residing in Turkey, with the option to increase aid by an additional €3 billion.

Turkey also expects visa liberalisation for its 75 million citizens traveling within the EU by June and fast tracked accession into the Union, one of its long-standing goals.

(Reuters contributed to this report)