UK Independence Party (UKIP) leader Nigel Farage is the most popular party leader in Britain, polling the highest out of the four largest parties for leader satisfaction in a final poll before the referendum.

UKIP leader Nigel Farage, who has has been arguing for the UK to leave the EU for more than 20 years and campaigning throughout the lead up to the referendum, has topped the poll in approval ratings.  Mr. Farage’s figures are double his closest rival, Liberal Democrat leader Tim Farron.

With a satisfaction rate of 38 per cent, Mr. Farage topped the table followed by Prime Minister David Cameron for the Conservatives at 35 per cent, Labour’s Jeremy Corbyn at 27 per cent, and the Liberal Democrat leader Tim Farron at 19 per cent.

Mr. Cameron has the highest dissatisfaction rating out of all four party leaders at 58 per cent.

A UKIP spokesman has said:

“It is a truth universally acknowledged that there would be no referendum without the work of Nigel Farage and UKIP over the years, and it must be acknowledged from these polling figures that he and the party have been and continue to be a major asset for those who wish the 24th of June to be the United Kingdom’s Independence Day.”

The results of the IPSOS MORI poll were released on the 22nd June — just one day before the British people vote on the country’s membership of the European Union (EU). 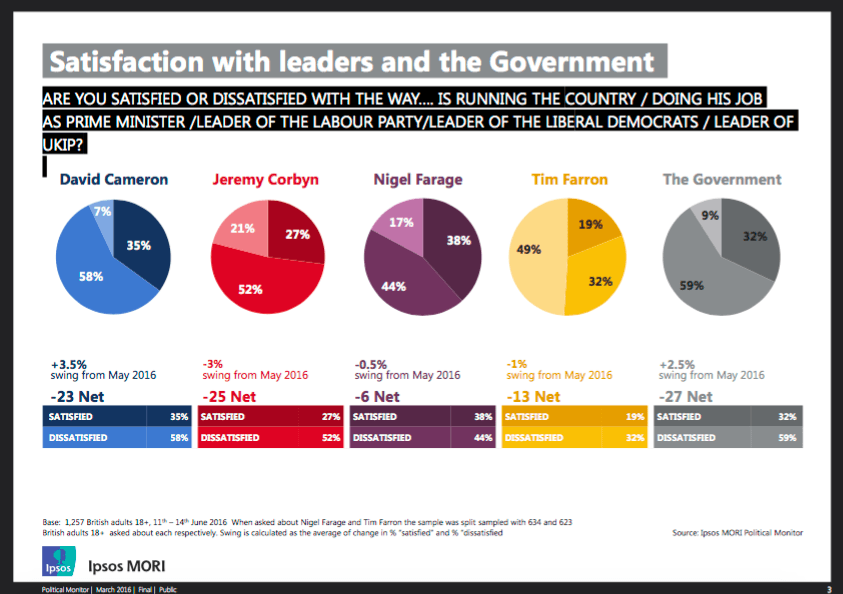