Truckers, dock workers, farmers and residents of Calais have shut down main roads into the port town in Northern France, promising to continue the blockade until the French government begins to dismantle the illegal ‘Jungle’ migrant camp.

Police recently declared large areas of the town “no-go zone” after dark as migrant violence “peaked”. Cars and trucks have been attacked with chainsaws and knifes, with migrants deliberately causing crashes so they can board vehicles.

The population of the camp is now at 10,000, the highest since French authorities agreed to “demolish” parts of it six months ago, claiming their goal was to reduce the number of camp inhabitants to about 1,500.

Update, 14:51 – BBC reporter Richard Galpin is talking to demonstrators live at the protest.

The BBC’s Richard Galpin is with protesters in Calais. Truckers, shop owners, farmers and police are blocking the motorway to the port and channel tunnel demanding the government find a solution to the problems caused by the migrant camp nearby. Watch Live and ask your questions to Richard and the protesters below

Update, 13:55 – The truckers and farmers are now having a BBQ on the motorway. 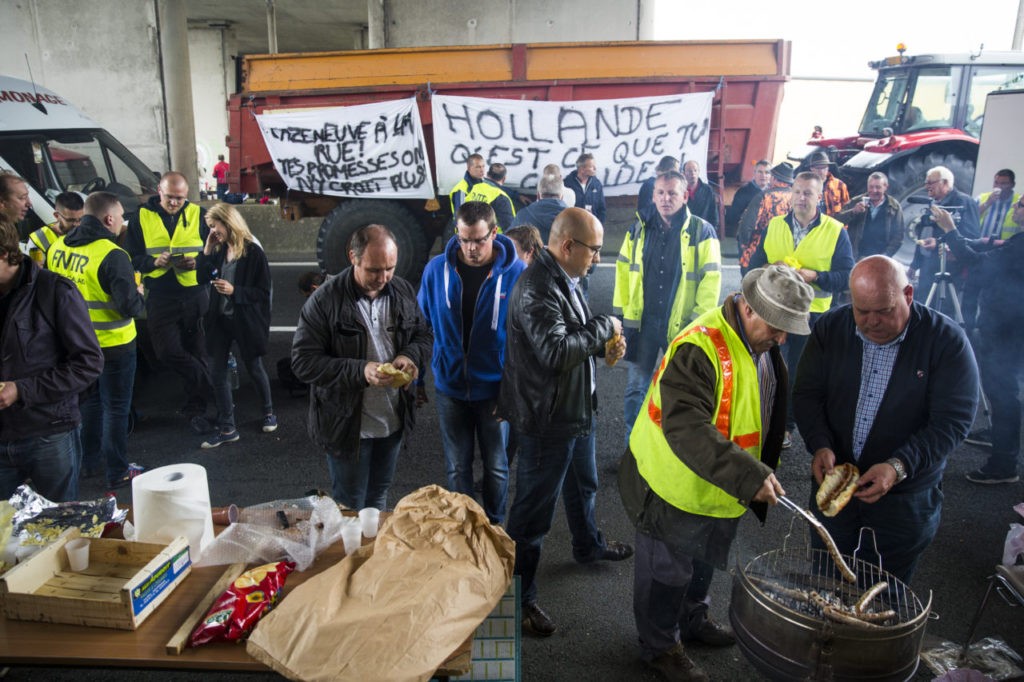 Farmers, french businesses owners and locals barbecue sausages during a blockade of the main road into the Port of Calais as they protest against The Jungle migrant camp on September 5, 2016 in Calais. (Jack Taylor/Getty Images) 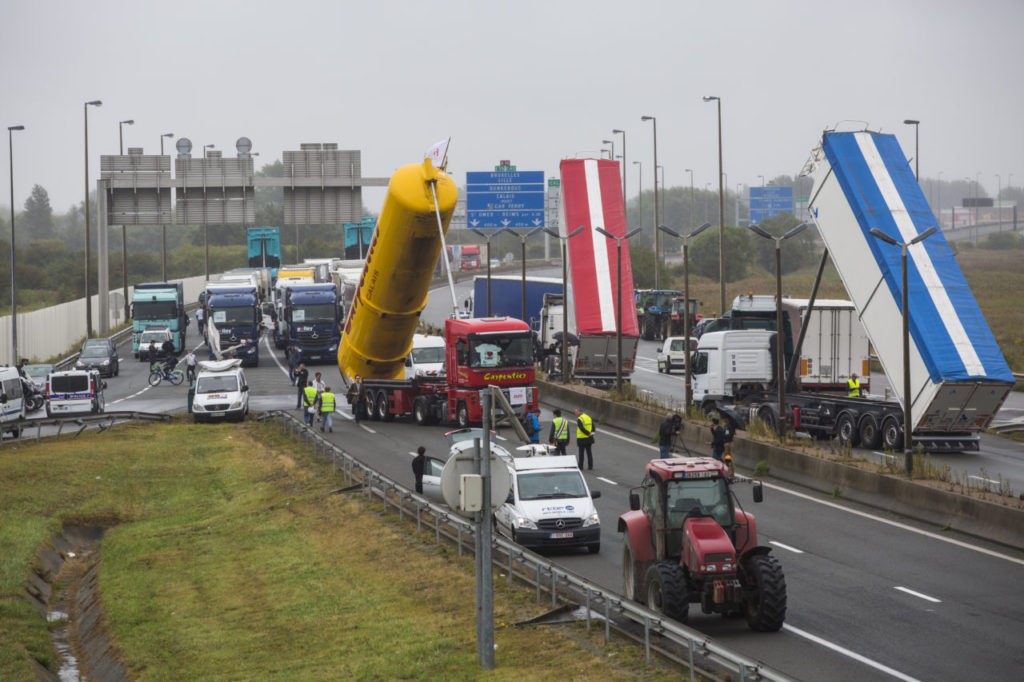 A convoy of farmers, french businesses-owners and locals blockade the main road into the Port of Calais (Jack Taylor/Getty Images) 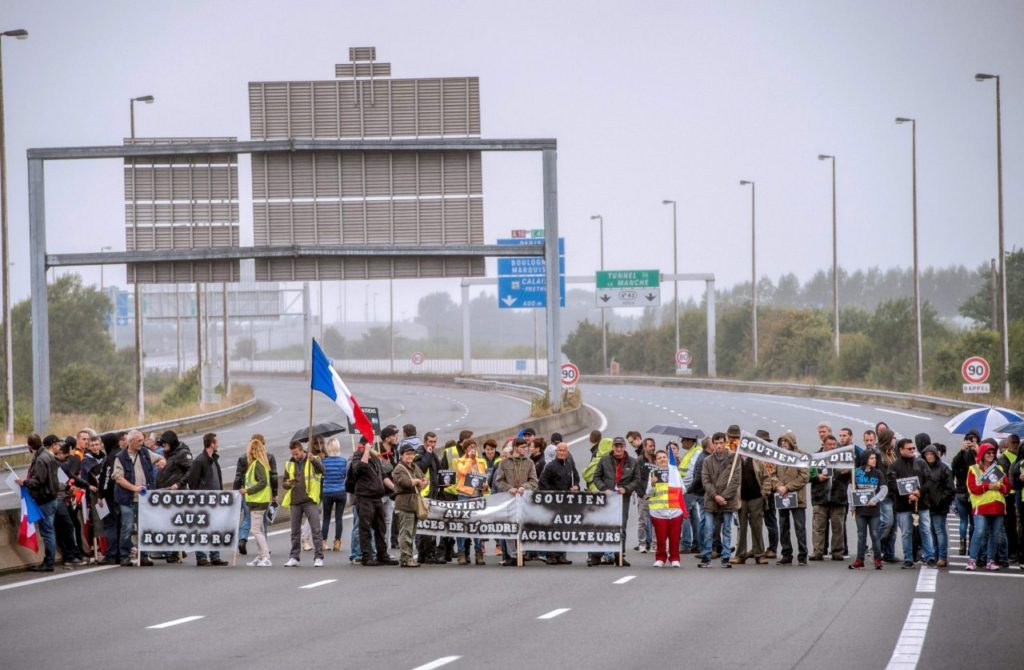 Residents of the French northern port city of Calais hold French national flags and banners reading “support to truck drivers” (L) and “support to farmers” (R) as they march on the A16 highway on September 5, 2016 during a “go-slow” protest of turk drivers and French Farmers calling for the dismantling of the so-called “Jungle” migrant camp in the French northern port city of Calais. )PHILIPPE HUGUEN/AFP/Getty Images) 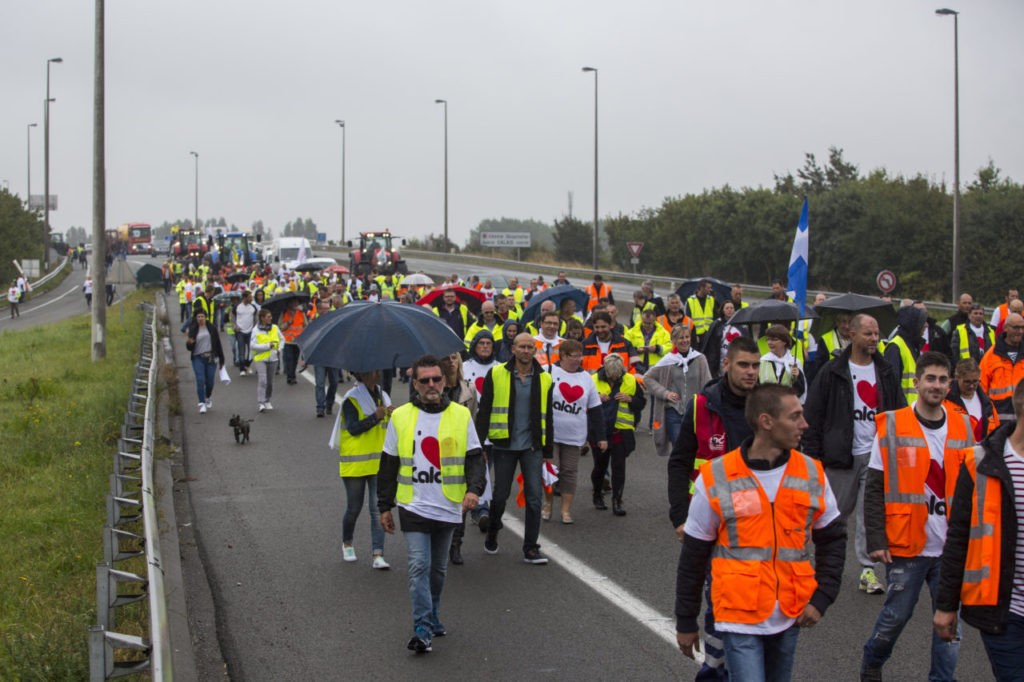 Update, 11:25 – David Sagnard, president of FNTR national truck drivers’ federation, spoke to Reuters as the convoys, each with about 40 vehicles, set off.

“Before, it was just attempts to get on trucks. Now there is looting and wilful destruction, tarpaulins are slashed, goods stolen or destroyed … Drivers go to work with fear in their bellies and the economic consequences are severe,” he said.

Adding: “Before, it was just attempts to get on trucks. Now there is looting and wilful destruction, tarpaulins are slashed, goods stolen or destroyed … Drivers go to work with fear in their bellies and the economic consequences are severe.”

Update, 11:20 – Eurotunnel has announced diversions and warned of delays.

Travelling from Calais ? to avoid the A16 to access to our Terminal, please use sides routes and deviations. Allow extra time 1/2 ^SL 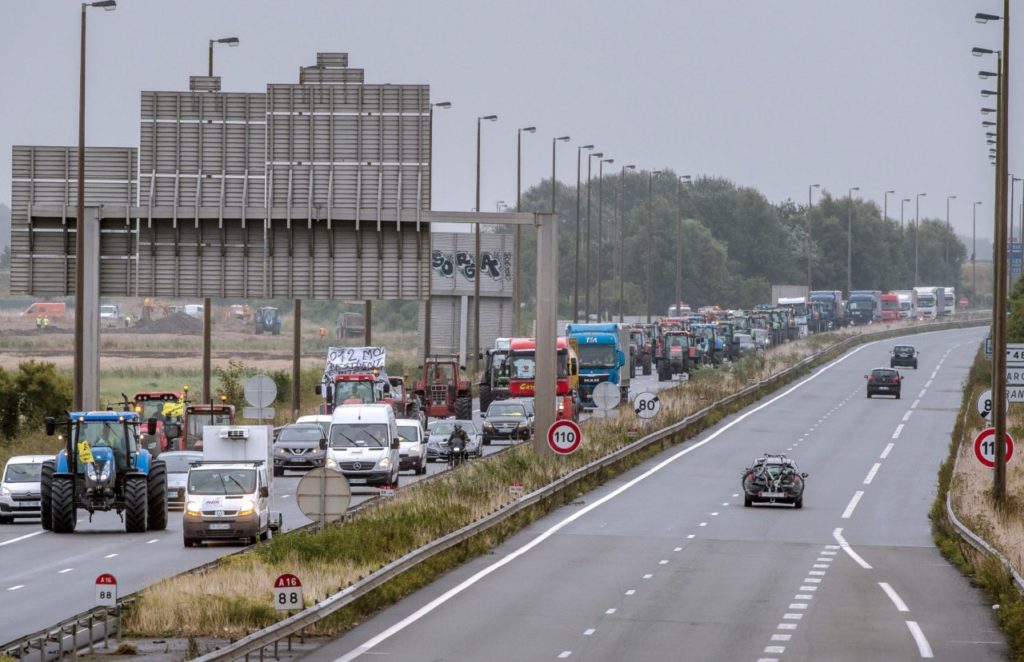 Truck drivers and farmers drive from Loon Plage to Calais, on September 5, 2016, during a joint “go-slow” protest on the A16 highway near Calais (PHILIPPE HUGUEN/AFP/Getty Images) 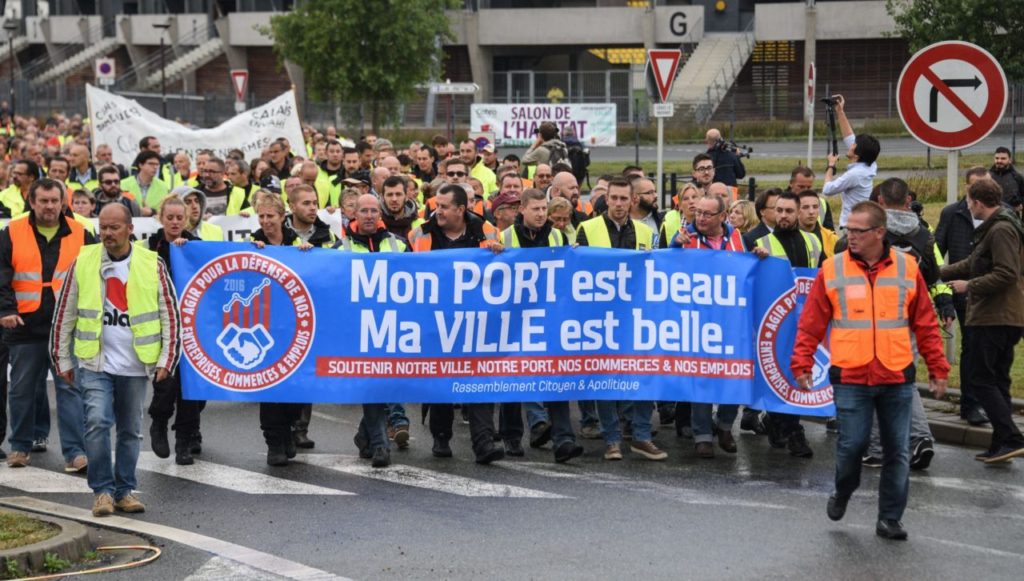 People hold a banner, reading “My harbour is beatiful, My city is beautiful”, as they take part in a demonstration on September 5, 2016 in Calais, (Photo credit should read DENIS CHARLET/AFP/Getty Images)

Update, 10:30 – Arial footage shown on Sky News shows the extent of the delays caused by the “go slow” operation.

A protest has begun to get part of the "Jungle" migrant camp in Calais removed- @NickMartinSKY is with demonstrators https://t.co/MWJrFlFSRv

Update, 9:55 – The main road into the Port of Calais has now been completely blocked by a crowd of hundreds of French businesses owners, local residence and a convoy of trucks.

The protest, dubbed Operation Escargot, is in opposition to official inaction over the huge and growing ‘Jungle’ illegal migrant camp and increasing violence faced by drivers and locals. 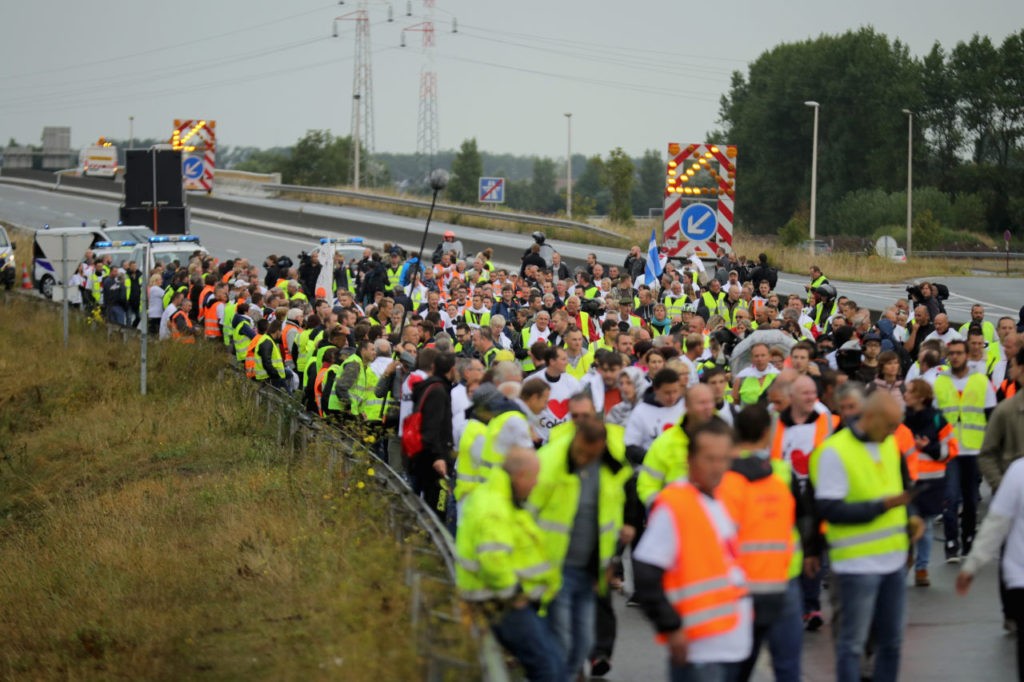 The original story from AP continues –

CALAIS, France (AP) — Truckers, dock workers, farmers and merchants are blocking a major highway in northern France to demand the closure of the Calais migrant camp known as the “jungle,” as its population surges and tensions rise.

Local authorities are urging travelers to avoid the area in hopes of limiting disruption from the Monday morning blockade, aimed at paralyzing traffic on the route used to access the Eurotunnel and port.

Interior Minister Bernard Cazeneuve announced Friday that the government would dismantle the camp “in a controlled operation” as soon as possible, but protesters want him to set a date. 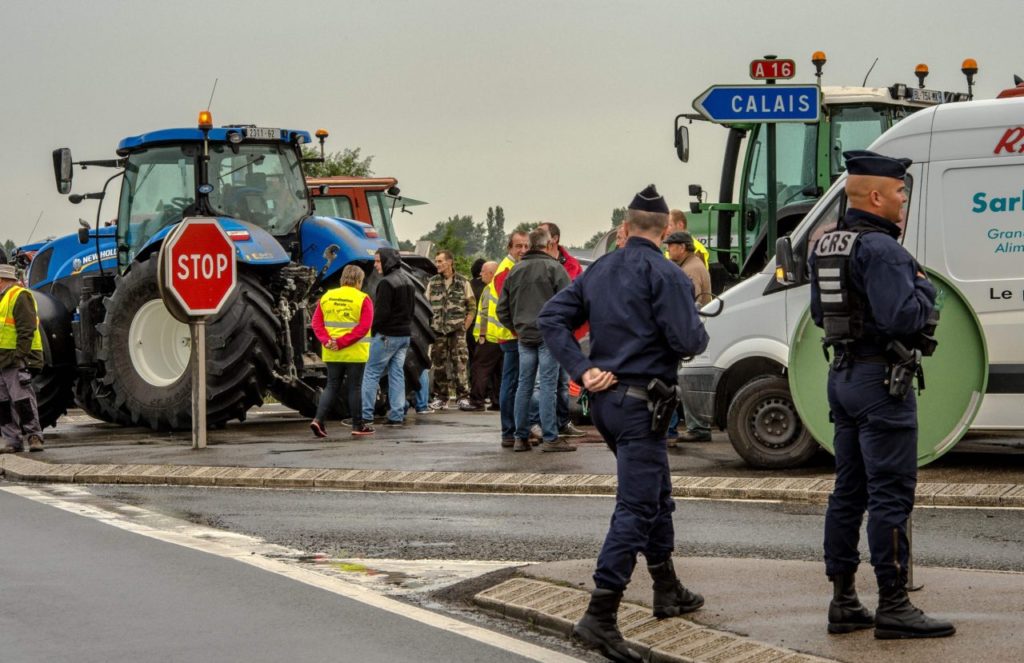 French police officers stand guard as French farmers gather at Marck prior to meet with a dozen of truck drivers on September 5, 2016 (PHILIPPE HUGUEN/AFP/Getty Images)

The camp, currently home to at least 7,000 migrants from the Middle East and Africa trying to reach Britain, has epitomized the challenges of Europe’s migrant crisis. Authorities have tightened security and closed half of the camp, but the migrant population has reached record highs.

Truckers are frustrated by migrants’ attempts to hop into their vehicles to slip across the English Channel, and local businesses say the migrants have become an economic drain on the city. They are blocking the A16 highway, which is used by European transporters to reach Britain via Calais. 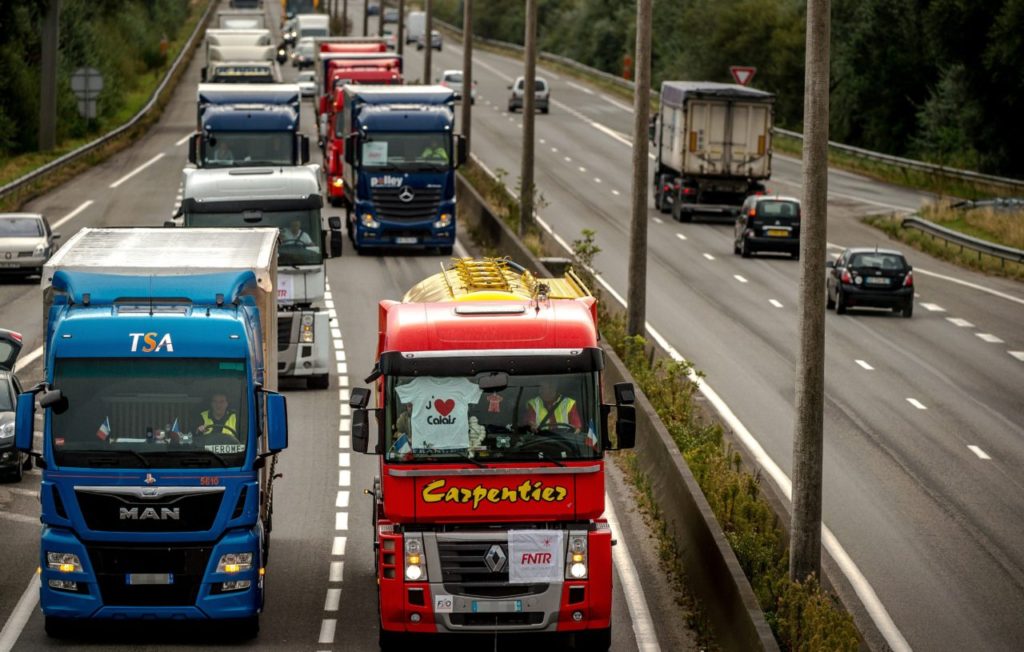 The local administration issued a statement Sunday urging people to avoid non-essential travel to the Calais area throughout the day.

Aid groups warn that a hasty shutdown of the camp would scatter the migrants, aggravate the city’s troubles and worsen the humanitarian drama. While the camp conditions are dismal, migrants have access to food distribution, showers and makeshift shops.

The government says about 7,000 migrants are living there, while aid groups estimate more than 9,000. 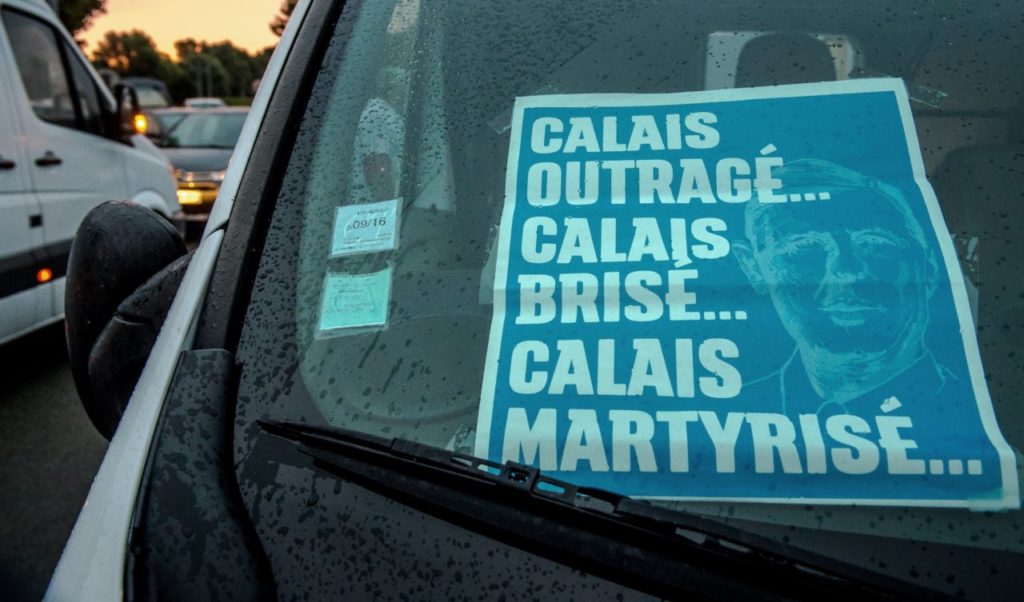 A picture taken on September 5, 2016 shows a banner reading “Calais outraged, Calais broken, Calais martyred” and picturing Charles De Gaulle in a vehicle during a slow-down operation lead by truck drivers on the A16 highway from Loon Plage to Calais (PHILIPPE HUGUEN/AFP/Getty Images) 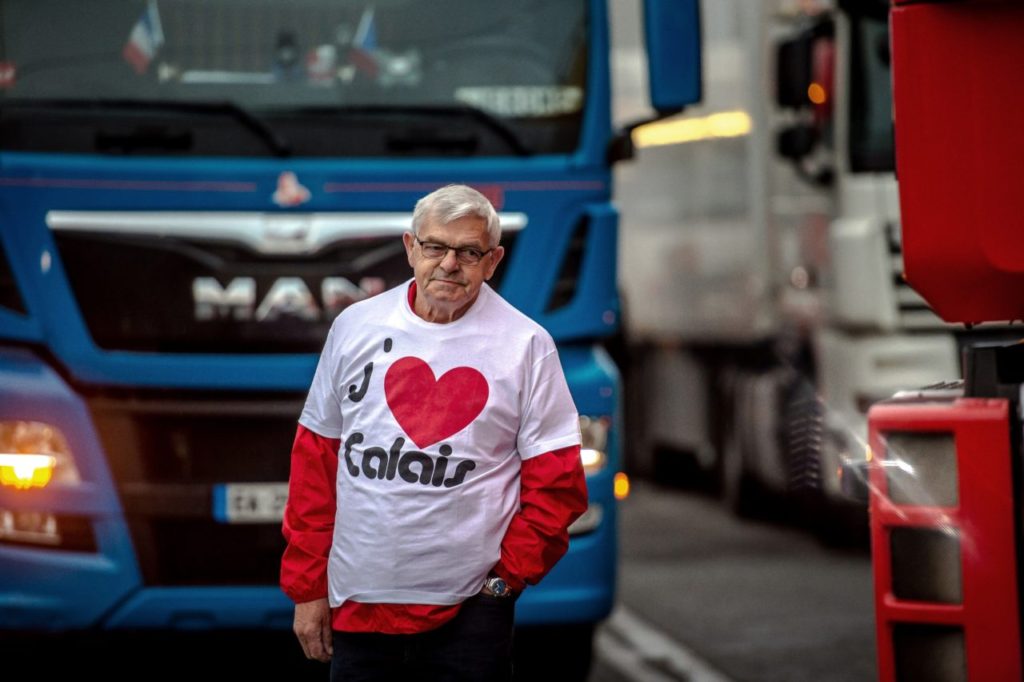 A man wearing a T-shirt reading “I love Calais” stands among trucks as a dozen of truck drivers gather in a parking on September 5, 2016 (PHILIPPE HUGUEN/AFP/Getty Images)