The Guardian’s U.S. bureau appears to have denied the Rotherham and Cologne rape scandals as “made up” while attacking a gay, feminist, sexual assault victim and Breitbart contributor, claiming her experiences of sexually aggressive migrant men is “openly, wildly racist”.

The sex assault-denying Guardian has attempted to discredit an article by former left-wing activist and LGBT and women’s rights campaigner Anne-Marie Waters who wrote an article in October 2015 which was subsequently tweeted out by Donald Trump Jr on Tuesday morning.

The paper’s U.S. election live blog said of the article: “What Donald Trump Jr is tweeting here would very comfortably appear in the feeds of the white nationalist accounts he approvingly retweets”. Author Tom McCarthy adds: “The Breitbart story [sic: it is an op-ed], a tourist’s out-of-nowhere description of a made-up gang-rape epidemic in Europe, is not only openly, wildy racist, describing a continental crisis of white European women under assault by “Middle Eastern-looking men” – the racist Breitbart piece is also breathtakingly unhinged from reality”. 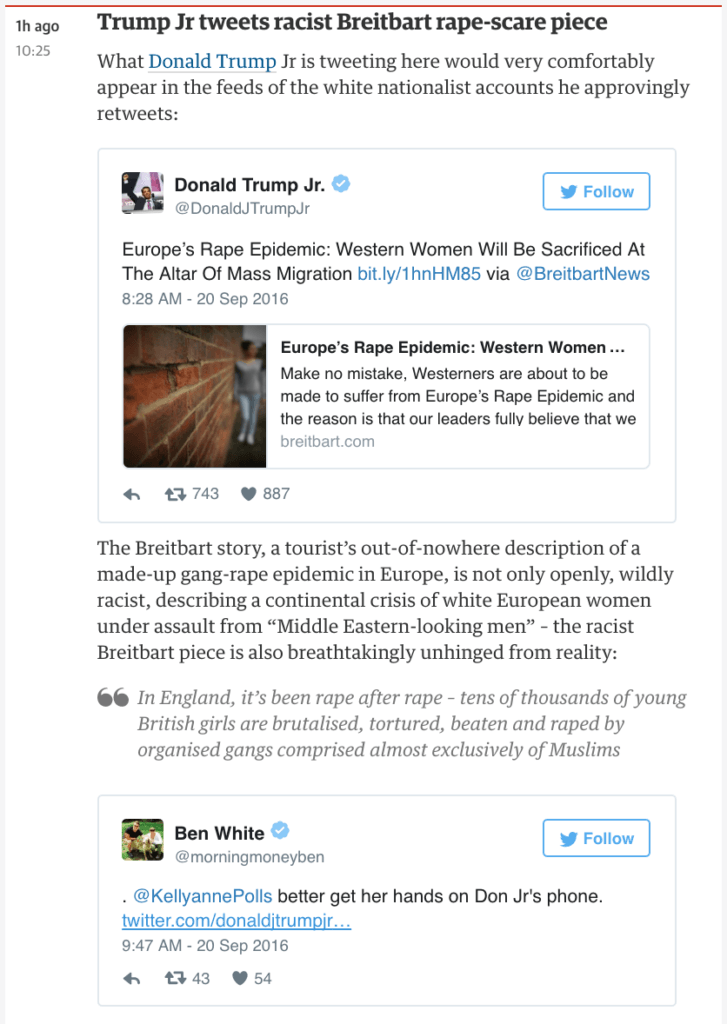 How the Guardian attacked a sex assault victim

Ms. Waters’s article, entitled “Europe’s Rape Epidemic: Western Women Will Be Sacrificed At The Altar Of Mass Migration” details Ms. Waters’s own experiences with sexually aggressive migrants, as well as using statistics from Norway, Denmark, Germany, and the United Kingdom to prove her article’s premise.

Regardless, the Guardian, as well as Talking Points Memo and POLITICO have described her work, published by me (Raheem Kassam) on Breitbart London, as “white nationalist”.

When asked to apologise, author Tom McCarthy responded: “I’ve had my editors review the post and we’re going to let it stand”.

. @KellyannePolls better get her hands on Don Jr's phone. https://t.co/MONZ7joJiq

When challenged on his denial of Europe’s rape epidemic, White simply replied, “Charming”.

The Guardian’s UK outlet, which also serves as the HQ for the group, has written extensively on the Rotherham rape scandal which saw at least 1,400, predominantly white, working class girls groomed and raped by mostly Pakistani, Muslim men.

One headline on the Guardian from February 2016 reads: “Child sex abuse in Rotherham: ‘I was treated as a criminal … never as a victim'” – the same approach the Guardian U.S. has sought to take with Anne Marie Waters, today.

The Cologne sexual assault and rape scandal, broken by Breitbart London, described the scenes as around 1,000 migrants sexually harrassed, assaulted, and raped German women at the train station in the German city on New Year’s Eve 2015.

In Ms. Waters’s article, she tells of how she was repeatedly targeted for sex by migrant men who refused to accept her rejections. She then goes on statistics from various European nations.

Ms. Waters concludes with the stark warning: “Make no mistake, Westerners are about to be made to suffer, and the reason is that our leaders fully believe that we deserve to”.

Ms. Waters work at the Shariah Watch website is supported by British House of Lords member Baroness Caroline Cox, a former Deputy Speaker of the House of Lords.

Raheem Kassam is the editor in chief of Breitbart London, you can follow him on Gab by clicking here