This week the UK began construction on what has been dubbed the “great wall” near the porous border in Calais, France, to keep illegal migrants from gaining access to vehicles preparing to cross the English channel.

The British government is pouring around £2 million in the project to put up a 4 metre (13ft) high barrier along both sides of the main road into the northern French port.

Plans were revealed at the beginning of September and building is expected to be complete by the end of the year, the BBC reports.

The wall is designed to keep migrants from the nearby ‘Jungle’ migrant camp from attacking and stopping traffic as they attempt to board lorries and cars to make clandestine entries to the UK.

It will be made of smooth concrete to make it difficult to scale and will be extended by fences, many of which are already in place.

Work has started on the UK-funded barrier dubbed the “Great Wall of #Calais“. pic.twitter.com/qrdz4x8hmH

The population of the ‘Jungle’ camp has recently surged to more than 10,000 and the number of violent incidents has shot up as migrants become more desperate and audacious in their attempt to enter the UK.

Police have declared a part of Calais a “no go zone” after dark, and migrants have caused vehicles to crash, left logs on the road, thrown rocks off bridges, and set fire to undergrowth. Drivers have also been attacked, beaten with bats, stabbed, and even threatened with chainsaws.

Calais port chief executive Jean-Marc Puissesseau said earlier this month: “This wall is going to prevent migrants from getting onto the road every night”. He said they routinely put “tree trunks, branches, gas cylinders” in the road to stop the trucks.

“We can no longer continue to put up with these repeated assaults,” he said.

Announcing the project in September, the UK’s immigration minister Robert Goodwill said: “People are still getting through… We’ve done the fence, now we’re doing the wall.”

“We are going to start building this big, new wall as part of the £17 million package we are doing with the French,” he explained. 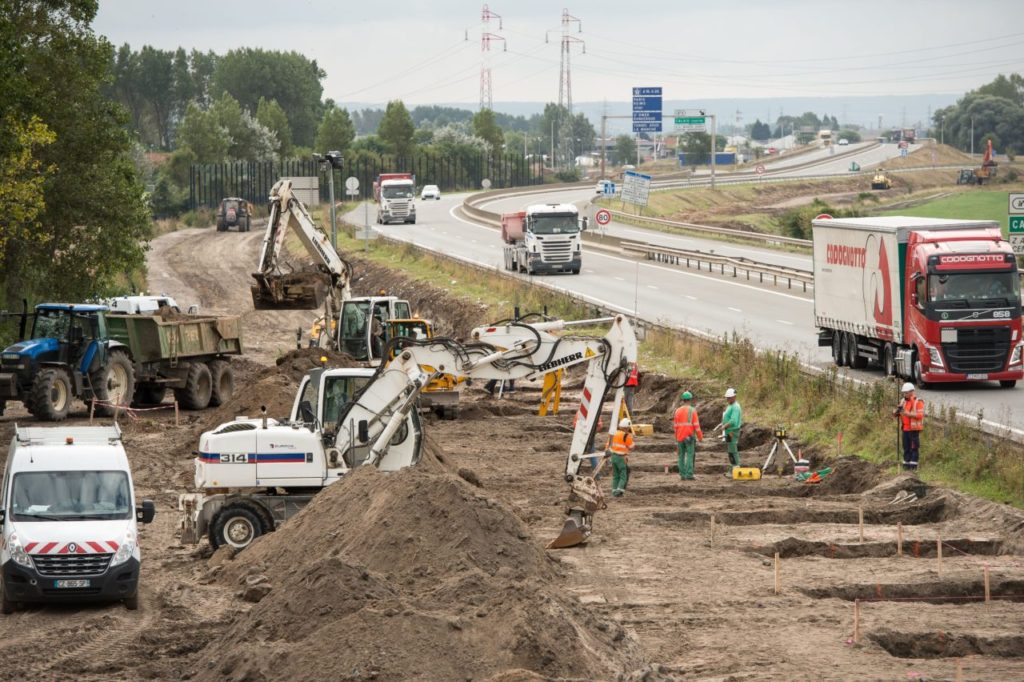 Workers dig foundations of a wall near Calais migrant ‘Jungle’ camp along the road leading to the harbour of Calais, northern France on September 20, 2016 to stop migrants from jumping on lorries heading to Britain. (PHILIPPE HUGUEN/AFP/Getty Images)

Following the announcement, left-wingers in Britain reacted in horror, with Labour and Green party Members of Parliament (MPs) comparing it to the policy proposals of American Republican Presidential candidate Donald Trump.

“Trumpism has now landed in Britain,” wrote Caroline Lucas, MP and co-leader of Britain’s Green party. “When Donald Trump said he would build a wall between the United States and Mexico, most of us recoiled. How had politics in the ‘land of the free’ descended so low, so fast?” she asked.

Home Secretary Amber Rudd previously told MPs the wall was “not a new initiative”, but what mattered was making sure the French had the right amount of security to prevent “illegals” trying to get to the UK.

“We support the French with money to help them do that,” she said. “It is up to them how they decide to secure their borders in Calais and around it.”